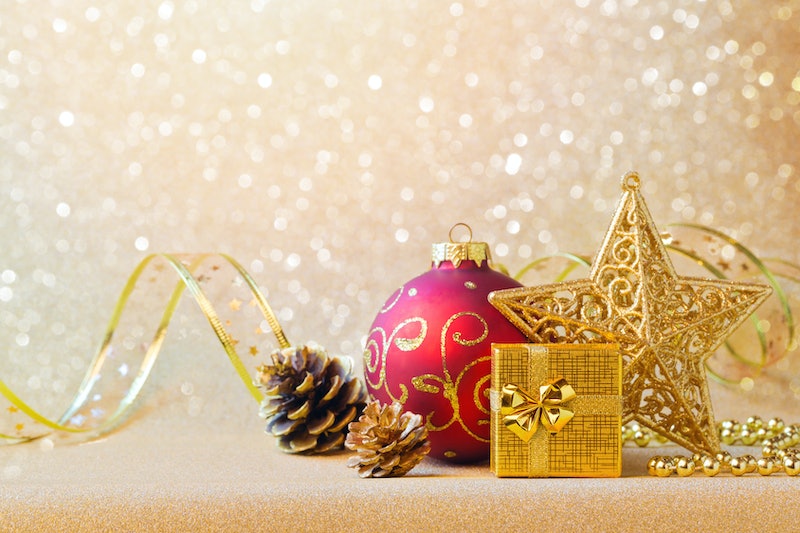 I did a DIY project with several containers of glitter in high school and now, years later, my mom still swears she finds pieces in her living room. But dealing with glitter cleanup isn't even the worst thing about the decorative material. According to the Guardian, glitter from a Christmas card glitter almost blinded a woman in Wales. The report was first published in British Medical Journal in 2013, but the lesson from this horror story is everlasting: Glitter is the worst. Per the medical journal, the woman went to the hospital because her eye was red, swollen and she couldn't see out of it. Doctors weren't sure what was going on, but they suspected a herpes simplex infection based on her symptoms. (Ocular herpes is a common eye infection.)

Imagine their surprise when they realized there was something shiny near her cornea after looking at her eye under magnification. After doctors talked to the woman and asked if she had any idea what was in her eye, she remembered a Christmas card she'd received that had glitter. Somehow, a clump managed to end up in her eye. All is well that ends well — doctors were able to remove the glitter without any problem. "This foreign body was removed from the surface of the cornea and the patient was discharged on topical antibiotic treatment," the report says.

I'm calling it now: This is the most terrifying thing I'll read all year. I'll concede that glitter is a ton of fun to look at — who can resist a glitter cappuccino or sparkling shoes? — but it is much less entertaining in reality. Consider the fact that glitter bombing — pouring glitter on someone in protest — is a thing that exists. Any material that can be used to punish your enemies should be regarded with suspicion. And of course, the fact that a woman almost went blind because of glitter just furthers my point.

The report says the woman got lucky. "In this instance, the patient was fortunate to have presented in the ophthalmic casualty department," the case study says. "The lesion may have been easily misdiagnosed as a herpetic simplex infection by non-specialists for which treatment would have been topical antiviral ointment instead of removal and antibiotics."

It should go without saying, but if you get glitter in your eye like the woman from this case study, go to a doctor. You can flush your eye with water in an attempt to get the glitter out, but since it can potentially cause vision loss, it's probably best to let a professional handle this.

The downside is that nearly blinding a woman isn't even the worst thing glitter has done. Scientists have said glitter needs to be banned because of its environmental impact — because glitter is made of plastic and is so hard to get rid of, it's potentially ruining our oceans. And according to the Telegraph, a 9-year-old girl was left with chemical burns after her phone case leaked glitter.

Even with all of the negative feelings I have for glitter, I bought tiny pieces of confetti for a New Year's Eve party earlier this week. I forced my husband to sit in the confetti pile for an Instagram picture, and we were covered in sparkly bits for the rest of the night — I'm almost positive there's still glitter in my hair. That's probably the most frustrating thing about the stuff. Even though it's demonstrably the worst thing ever, it's also impossible to resist. I'll be avoiding it with slightly more vigor now that I realize just how dangerous it can be.

More like this
TikTok’s Favourite Razor Brand Has Launched Into Wellness
By Tomi Otekunrin
6 Abortion Advocates To Follow On TikTok
By Sara Youngblood Gregory
How To Protect Your Digital Privacy If You Need An Abortion Post Roe v. Wade
By Kaitlyn Wylde
How To See The Lunar Eclipse On May 15-16, 2022
By Kaitlyn Wylde
Get Even More From Bustle — Sign Up For The Newsletter