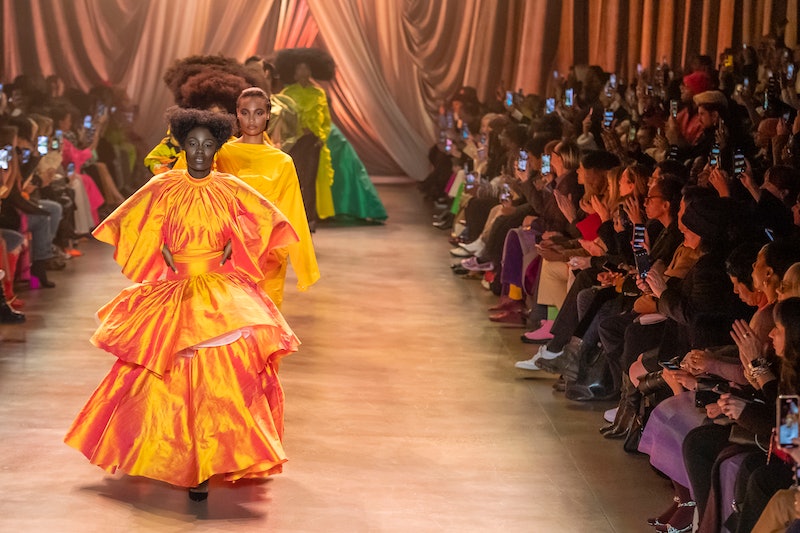 For those outside the fashion industry, the name Christopher John Rogers might not be familiar — at least not yet. But that’s all about to change. The 26-year-old designer has already dressed the likes of Michelle Obama, Rihanna, Lizzo, Gabrielle Union, and Tracee Ellis Ross, just to name a few. This weekend, he showed his Fall 2020 ready-to-wear collection at New York Fashion Week and he's dropping a highly anticipated Net-A-Porter debut today.

“Anyone can do a thing but is it the right time to do the thing?” Rogers posited at a recent panel called “The New Face of Fashion” presented by BMW, the official automotive sponsor of NYFW. In conversation with GQ Deputy Fashion Director Nikki Ogunnaike, Rogers discussed his career trajectory from fine arts student to CFDA/Vogue Fashion Fund winner.

“Everyone has their own path, but [as I started out in fashion] I was looking at designers who maybe didn’t have access to funds when they were younger, like [Alexander] McQueen or [John] Galliano,” Rogers said. “Their first collections maybe weren’t the best, or they didn’t have the best fabrics in Italy, but they had vision. They had a really strong point of view.”

Without a doubt, Rogers has a strong, fresh perspective that the fashion industry desperately needs. His designs are distinctly striking and vibrant, yet feminine and playful. He can add an air of elegance to Lizzo's green feather dress just as easily as he can make a hot pink, ruffled ball gown look sophisticated and tasteful.

Indeed, Rogers’ Fall 2020 collection epitomized his unique ability to go big and bold with controlled nuance. Comprised of 40 looks total, the collection featured exaggerated silhouettes — think ‘80s-inspired suits with shoulder pads — and his signature use of unapologetic color and volume.

His ball gowns, in particular, stole the show and garnered audible gasps from the crowd. One model walked down the runway in a lush green number with a sweeping skirt; another donned a pink and black plaid creation that channeled a modern Marie Antoinette. What’s more, by showcasing Black models in an array of natural hairstyles, Rogers made a critical statement about the importance of centering diverse beauty at fashion week.

Rogers is one of the buzziest designers at NYFW this season but he's far from an overnight sensation. Before he became a celebrity favorite, he was holding down a full-time job, trying to piecemeal times throughout his day when he could work on his passion. It was challenging — and risky.

“I would take vendor meetings on my lunch breaks, [running] in between all these places and risk[ing] getting fired,” Rogers said. “But luckily, my boss at the time was very understanding and supportive, even though he did not have to be. I was very blessed to have someone who could see I was very passionate.”

For many creatives in a similar position, trying to determine when to leave that steady job — along with a regular paycheck and benefits for that matter — can be an agonizing decision. In Rogers’ case, the decision was made for him.

Figure it out, he did. Rogers secured a consulting job thanks to the press he received from showing at previous fashion weeks. He saved money from that gig to invest in his namesake label, ultimately creating the collection that won him the CFDA/Vogue Fashion Fund Award in 2019.

“Even that collection, we were selling out [of] an apartment, and we were still making sacrifices even though we were in this position,” Rogers shared. “It’s a gag because we just got [that] award. I now have a studio, which is amazing, but the money goes back to the studio, to paying my employees, and to developing [my] collection. It’s not like I’m making less money now than I was at my old job, but it’s still a sacrifice. I just want people to know that’s a reality at the moment.”

Rogers’ candor is refreshing in an industry that so often operates with an air of mystery, making it seem as though success happens instantly and by chance. Rogers also credits his rise in the fashion industry to staying resilient in the face of discrimination.

“There [have] been so many instances where I’ve felt like I didn’t belong in a space, or people weren’t receptive to me or my energy,” he revealed. “Or [they] thought the work I was doing was tacky, dated, or not really relevant. You can’t accept that energy. You have to go, ‘Oh, you actually don’t see me. That’s fine because I don’t see you. There will be someone that gets it.”

More like this
Zendaya’s Sheer Valentino Look Won Paris Fashion Week
By Dominique Norman
Bella Hadid's Best Runway Looks From Paris, Milan, & More
By Allie Fasanella
Florence Pugh Wore A Sparkly Sheer Top at PFW & I’m Not Over It
By Allie Fasanella
Bella Hadid Will Think Of Her Spray-On Dress From Paris Fashion Week “Forever”
By Brad Witter
Get Even More From Bustle — Sign Up For The Newsletter