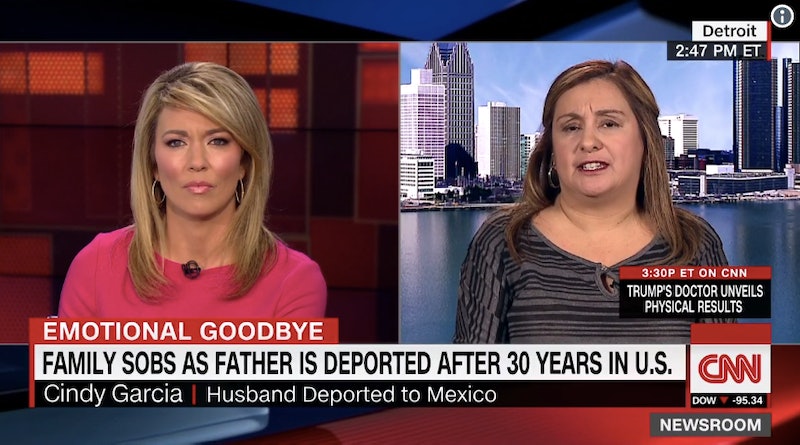 On Monday, a video of an undocumented Michigan man preparing for deportation to Mexico went viral, sparking outrage across social media. The next day, Jorge Garcia's wife, Cindy, described her family's devastation in an interview with CNN.

"As depressed as I am — and I just want to scream and cry and lay in bed and not move — I know that I have to come forward for the people who cannot, and tell our story," Cindy told CNN's Brooke Baldwin on Tuesday. She described her family as "devastated," adding that her husband's "case should have been looked at as an individual case and not as a whole, because my husband is not a criminal.”

Garcia's story made headlines on Monday when it was covered by reporter Niraj Warikoo for The Detroit Free Press. According to the report, Garcia, 39, was brought to the United States when he was just 10 years old. After years of stay-extensions, he was informed in November of 2017 that he would no longer be able to reside in the United States and needed to prepare for deportation. According to both Cindy and the Free Press, he has no criminal record and pays taxes every year.

"It was this year, Nov. 20 was our annual visit with [ICE]," Cindy said. "We went and they told us they were going to detain him. Our faces turned white. We panicked. We didn't know what to do." After several delays, the Garcias were informed that Jorge would have to leave on Jan. 15, 2018.

According to Cindy, back in 2005 she and her husband began pursuing the proper legal channels that would allow Garcia to stay in the United States. She says that a paperwork error made by a lawyer resulted in Garcia's "deportation status." Since 2009, she says Garcia has attended annual meetings with immigration officials, who had granted him extensions to stay in the United States.

"It was very sad, knowing that we had to face this head-on and there was no more extensions that were coming," she said. As the family prepared for Garcia's departure, Cindy set up a GoFundMe fundraiser to help cover the cost of legal fees and travel costs associated with Garcia's deportation.

Cindy told CNN that she and her family devoted the final days before the deportation to doing family activities, like playing boardgames and having meals together. She also said that she has struggled to explain the impending event to their 12-year-old son.

"It's very hard because he doesn't grasp what the government did and he doesn't understand why they took him either," Cindy said of her son. "Because he's not a criminal. That's why we're trying to justify it with him. And it is very, very hard."

According to reports, Cindy and their two children are U.S. citizens. But while marrying a U.S. citizen can function as a path to citizenship for non-citizens, marriage itself doesn't guarantee legal residency.

"He is sad," Cindy said of her husband, who she said she has spoken to since he left. "He's depressed. He's entered a country he does not know because he hasn't been there since he was 10 years old."

Garcia's deportation happened in the same week that the Democratic lawmakers have been sparring with Republicans over the future of the Deferred Action for Childhood Arrivals (DACA) program and its recipients. The Obama-era program provides deportation protections for hundreds of thousands of undocumented immigrants who were brought to the U.S. as children. Trump announced last September that the program would end in March if Congress didn't otherwise codify it.

While Garcia is too old to qualify for the program as it currently stands, he reportedly asked whether he could stay in the United States until permanent DACA legislation was put in place, which could potentially expand the age-range for those who qualify. Garcia told the Free Press that his request was denied.

Opponents to Garcia's deportation were particularly horrified that the event was scheduled for Rev. Dr. Martin Luther King, Jr.'s birthday, a federal holiday intended to celebrate King's teachings, which often focused on racial equality and loving others. (If you want to help Garcia's family, here are some ways to do so.)