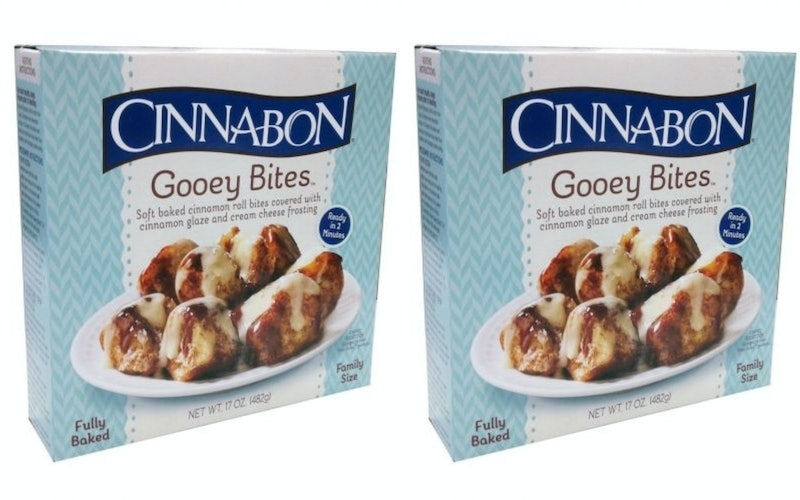 Cinnabon is one of the hardest places to resist whether you're all the airport, the mall, a bus station, or anywhere else where that doughy cinnamon smell can reach you. But, there's a way to bring that scent into your own home that you might not have come across before. Single serving Cinnabon Gooey Bites are on the market, as pointed out by Instagram account Junk Food Adventures, the owner of which spotted them in a Kroger.

The Cinnabon Gooey Bites are part of a collaboration between Cinnabon and Auntie Anne's, another irresistibly smelling mall chain, and are basically those Auntie Anne's cinnamon pretzel bites, but with a cinnamon roll texture and cream cheese frosting. On the Auntie Anne's site, they're listed in the fundraising section (specific branded items that can be sold by schools and organizations to raise money), so it seems the Gooey Bites are only available frozen for at-home eating and not in-store.

Each box of Gooey Bites comes with four single serving trays of that appear to have six bites each. In addition to Kroger, commenters on the Junk Food Adventures account have pointed out that they saw the treats at Meijer and at Ralph's. That said, they are very hard to find available online, but you can buy them wholesale.

Cinnabon does have a number of other grocery items available. There's Cinnabon International Delight creamer, Cinnabon Toaster Strudel, Cinnabon K-Cups, Cinnabon Cinnamon Bread, and, of course, Cinnabon Pillsbury Cinnamon Rolls, so you can attempt to recreate the magic in your own home.

In addition to the apparent resurgence of Gooey Bites, Cinnabon had some other big news recently. On November 15, the chain started offering delivery all over the U.S., and it's delivery with free overnight shipping. Cinnabon opened its online shop at this time of year on purpose, so that people can send cinnamon rolls to their friends and family during the holiday season. Cinnabon president Kristen Hartman told Bustle, "The holiday season is our biggest season of the year and there’s nothing quite like the sensation of walking into a Cinnabon bakery during this time. Many of our fans want to share that experience with family and friends who may live across the country."

There are three options available for delivery: six regular-sized Cinnabon rolls, 15 MiniBons, or 16 BonBites. (BonBites are smaller than MiniBons, in case you're wondering.) They all come in attractive boxes in what most would call Tiffany blue, but what Cinnabon would probably call Cinnabon teal. The prices range between $39.99 and $49.99, which is quite a lot for cinnamon rolls, but probably still less than sending someone flowers and you can't eat flowers. So, ya know, just be sure you're weighing your options carefully before making any gifting decisions.

Whether you decide to go on the search for Gooey Bites, pop some frozen rolls in the oven, or order delivery, it's easy to make your house smell like Cinnabon. And you get to eat cinnamon rolls, too. Also very important.