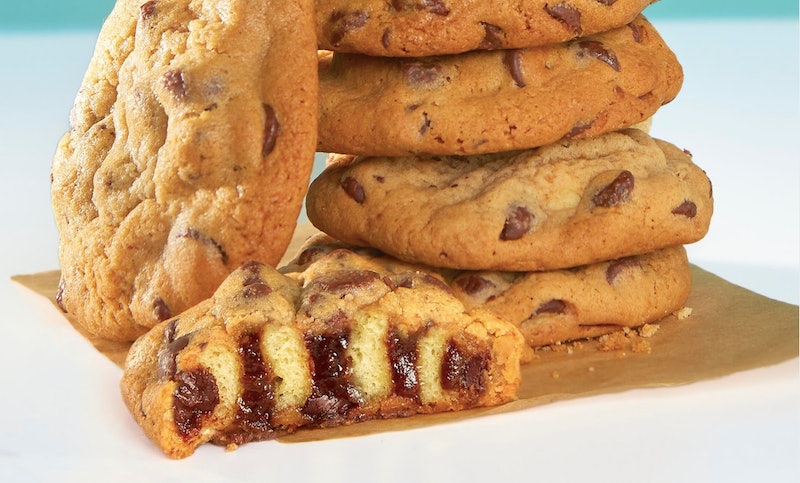 We may never have truly understood the phrase "beautiful lie" before the advent of dessert hybrids. True to form, this one dessert looks like a chocolate chip cookie, and then reveals itself to be full of none other than Cinnabon's BonBites. That's right — Cinnabon's Cookie BonBites are back at the chain, in all of their gooey, chocolatey, cinnamon glory, in honor of National Cinnamon Roll Day on Oct. 4.

Per Cinnabon, the Cookie BonBite was first introduced to the chain in 2017, where its limited run sold out across the country. Similarly, this release of them will only be around for a limited time, while supplies last. Luckily, you have more than a few ways to get your mitts on them — they'll be sold both in Cinnabon mall bakeries and via Grubhub delivery in select markets. Though prices may vary, one Cookie BonBite will cost $2.99, whereas a pack of six will run for $9.99. Truly, though, cutting a chocolate chip cookie in half and finding that it's been stuffed with gooey cinnamon roll? I'd argue that's priceless.

"Our fans look to us for unique, highly craveable products that bring a spirit of love and magic, and Cookie BonBites do just that," said Cinnabon Chief Marketing Officer Karyn Sarago in a press release. "According to our fans on social media, our chef baked up one of the coolest mash-ups they've tasted and we're so excited for the return of these delightful little bites of bliss. What better day to celebrate their return than National Cinnamon Roll Day?"

If you find yourself living in an area devoid of Cinnabons, there are still plenty of ways to enjoy the iconic cinnamon rolls — and even, if you're feeling extra ambitious, to attempt a version of the Cookie BonBite yourself. Cinnabon products are sold in grocery retailers all over the country, and including Pillsbury Cinnamon Rolls based on the iconic Cinnabon recipe. You could ostensibly buy chocolate chip cookie dough, say a small prayer up to the oven gods, and try to pull off the greatness of the Cookie BonBite in your own home.

And if that's a total disaster, there's always the fallback of eating your Cinnabons in Toaster Strudel form, or even dunking it in your coffee — International Delights has a Cinnabon coffee creamer flavor that sells year-round, so you don't have to wait until the holidays like you do for a lot of other cinnamon-flavored products.

Speaking of — if you do happen to miss the latest rollout of Cookie BonBites, cinnamon lovers have something else to look forward to on the other side. In November, Kit Kat Sweet Cinnamon Miniatures will be hitting shelves for the holidays in nine-ounce bags for a limited time. Seems like the end of 2019 should be shaping out to be a delicious time for all things chocolate and cinnamon. Godspeed to anyone looking for a Cookie BonBite during the limited run — considering the hype they caused in 2017, let's hope the dessert gods may be ever in your favor.