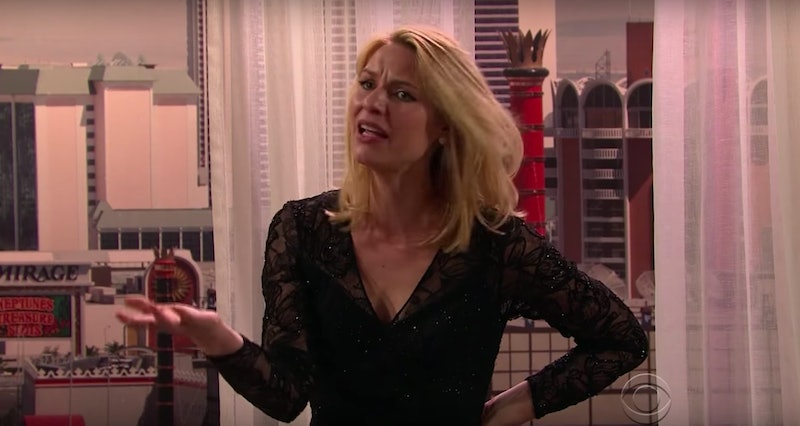 If you're a fan of James Corden's musical soap opera format, in which lyrics from pop stars are lovingly crafted into a TV show called The Bold And The Lyrical, you'll know that it's a laugh a minute. But somehow I found myself watching it and almost welling up, because Claire Danes' Katy Perry soap opera is so powerful that I found myself being bombarded by feelings about what's supposed to be a satirical comedy segment.

It doesn't help that the short does everything in its power to create an amusing atmosphere. They've got the absurd storyline (no spoilers here, just watch it), over the top styling, lyrics from none other than Katy Perry, and some seriously hilarious supporting actors (Christine Baranski and Jack McBrayer, who you'll know as Kenneth the Page on 30 Rock). But the thing is that Danes is just too good. While the contrast between her straight-faced delivery and the absurdity of her lines ("California girls, we're undeniable") should be comic gold, somehow you get swept up in the drama of it.

So, bold statement o'clock. Forget the Golden Globe she won aged 15 for My So-Called Life, forget her Emmy for Homeland. In my mind, it's her performance on James Corden's comic baby that proves what an incredible actor Danes is.

Normally, the blonde star works with epic lines. She's done Shakespeare (Romeo And Juliet) and she's done Stiehm (Meredith Stiehm, part of the writers behind Homeland). Here, she's got nothing but Perry's words to use to weave a tale of experimentation, feelings, intoxication, and intrigue.

Her throaty delivery captivates from the first moment, when she emerges, hair mussed, from underneath the blanket beside Corden. It teaches us a valuable lesson. Danes can do everything but maybe undermines herself when it comes to comedy, because, try as she might, she is incapable of giving the audience a hammily theatrical take on the line.

What can I say? It's tough being the best. And the Homeland star is, as the clip above shows, so very clearly more talented that everyone else that she can't help it if she manages to make you feel something about a tale of cheating and cherry chapstick.