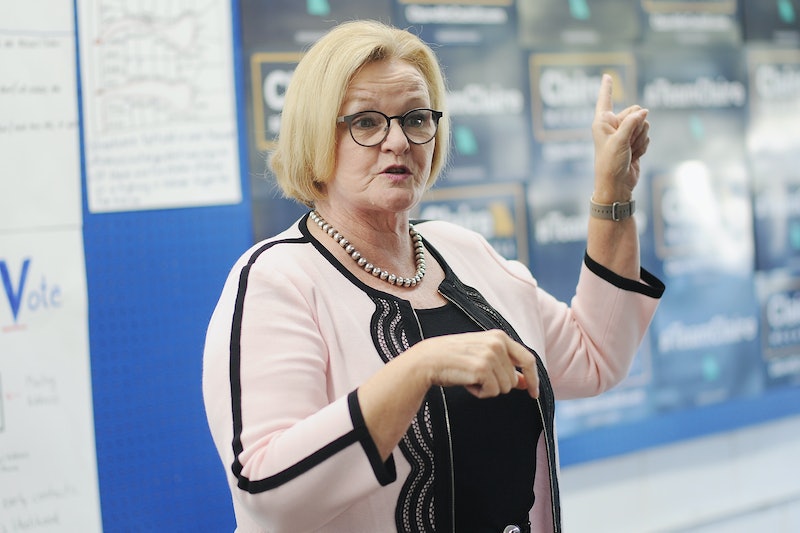 Many outgoing members of Congress are conducting exit interviews right now as they prepare to leave in just over a week. The departing Democratic senator from Missouri had a revealing conversation with CNN: In the interview, Claire McCaskill said that GOP senators call Trump "nuts" behind his back.

"They'll tell you," McCaskill told CNN, referring to her exchanges with Republican senators, "'The guy is nuts, he doesn't have a grasp of the issues, he's making rash decisions, he's not listening to people who know the subject matter.'"

But they'll only say that "if it's just the two of you," she said, explaining that they fear backlash from the GOP base if they criticize the president openly. "In public if they go after him ... they know they get a primary, and they know that's tough." CNN reports that she didn't mention any specific senators by name.

The fact that senators generally back Trump in public defines the party, McCaskill believes. "This is Donald Trump's Republican Party," she told CNN. "Make no mistake about it."

McCaskill has been highly critical of Trump since before he took office, though at times she seemed to think that his critics in the GOP would stand up to him a bit more. Before the 2016 election, she told CNN that she didn't believe that the majority of her Republican colleagues in the senate would vote for him.

In her new interview, McCaskill told CNN that history "will judge some of my colleagues harshly" because "they didn't stand up to this President at some of the moments where he has been unhinged about particularly the rule of law."

McCaskill faced a difficult reelection bid in November, since Trump won her state by 19 points two years prior. She hoped that she would be able to win over enough Missourians by steering a path for herself near the middle of the aisle, according to The New York Times; for example, she voted in favor of some of Trump's nominees but not others. But it ultimately wasn't a winning strategy. McCaskill lost her bid to represent Missouri for a third term to Republican Josh Hawley, who beat her by six points.

In her CNN interview, McCaskill said that her long tenure in government may have worked against her in the election. "In most professions and careers, the more experience you have, the better, the more valuable you are to the people that you work for. In politics, not so much anymore," she said. "There was a sense that, maybe she has been around long enough." Hawley has never before served in Congress, though he is currently Missouri's attorney general.

Despite her loss, McCaskill believes that she can still contribute to the Democratic party, and she told CNN that she intends to provide counsel for those who make bids for the presidency in 2020. "The way you get things done here is by reasonable negotiation and compromise," she said. "Somebody who talks about leading in that direction is the one that can win places like Florida, Ohio, Wisconsin, Michigan... and maybe even compete in a place like Missouri."