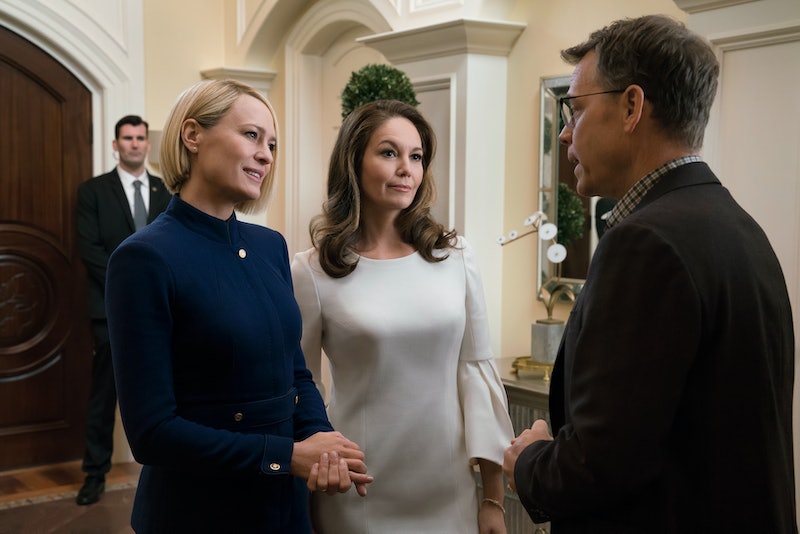 Claire Underwood's presidency is not without its detractors, and one of her biggest enemies may also be one of her closest friends — or, at least, whatever the House of Cards version of "friends" are. After a brief exchange of jibes and insults, Claire Underwood and Annette Shepard briefly set their rivalry aside to look each other in the eyes and do a slow-moving dance that shows off a surprising amount of flexibility, but also begs the question "why would they do that?" Claire and Annette's House Of Cards dance may be an odd moment, but it communicates how deep their connection is.

The dance that Claire and Annette are doing is called the Texas Dip, and is a staple of debutante balls in the Lone Star State. Houstonia Magazine explains that some people hire ballet trainers to practice the complicated move so that they can perform it in the extravagant dresses and high heels that a debutante's ball would require. Claire and Annette, both having grown up together in Texas, likely had to attend their fair shares of Texan debutante balls in their youth, and remember the signature Texan debutante bow after all these years.

In an interview with Bustle, Diane Lane, who plays Annette Shepard, revealed "I know that we researched [The Texas Dip] thoroughly, we practiced it well," and that the dance is just a peek at Annette and Claire's connection. "It was a bonding experience for [Claire and Annette] and really about a shared irreverence for the pomp and circumstance that is mandatory in some of these intuitions of higher learning."

Claire and Annette's proficiency in the Texas Dip appears multiple times throughout the final season of House of Cards. Initially, they perform the dip to each other after Annette attempts to get under Claire's skin by admitting that she had slept with Frank and that his performance left something to be desired. The Dip is once again seen in a flashback, in which young Claire and Annette pass a joint mid-dip in one of their bedrooms — something that is likely frowned upon amongst debutante circles.

Lane suggests that despite the fact that Annette and Claire have gone from sharing weed to being two of the most powerful people in the world, "they know that they're human, they indulge in things that are not approved and they have that common frame of references on each other and shared memories."

House Of Cards has always had tricks hidden up its sleeve, showing that even when The Underwoods have reached what they believed to be the apex of power, the curtain is drawn on a force that is somehow more powerful than being President of the United States. Annette Shepard's resources and influence are both threats to Claire's presidency, but it's their shared history that could give Annette the opportunity to tear down her well-being without having to resort to hiring an assassin. Claire and Annette may be mortal enemies, but they'll always have the Texas Dip.