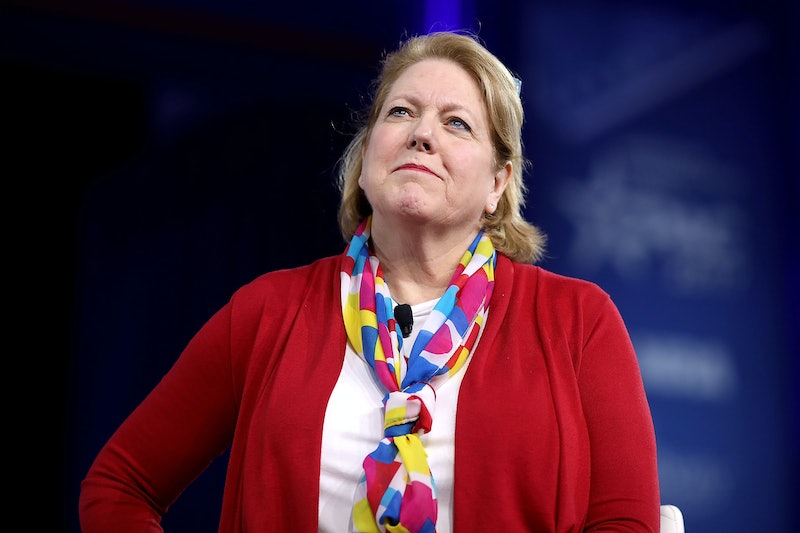 While there was hope that the rampant spread of fake news during the 2016 election would be a cautionary tale for the 2018 midterms, there's been no such luck. And this time it's being spread by unlikely characters — on Tuesday, Supreme Court Justice Clarence Thomas' wife Ginni shared an outdated photo meant to condemn the migrant caravan traveling across Central America.

The photo depicts a bloodied Mexican police officer in riot gear, with what appear to be serious wounds on his head. Thomas, along with thousands of other Facebook users, posted it to her Facebook account with the caption "The media won't share THIS, will they? It is an invasion, and thank GOD for President Trump."

According to The Washington Post, the photo first began circulating around Facebook on Sunday with the caption, "And WE are supposed to believe these are just poor, helpless refugees seeking asylum??? I am 100% behind POTUS deploying our military to protect our border and keep them out." Since then, the fact-checking site Snopes confirmed that the photograph is actually six years old, and was taken during the 2012 student riots near Mexico City. In other words, the photo is completely unrelated to people in the migrant caravan.

Thomas, despite being married to someone whose job it is to remain apolitical, is somewhat of a conservative firebrand. Her private Twitter account bio reads "Love America! Battle liberal intolerance, political correctness and Ameriphobia! Retweets are 'amen's'!" In the past she has circulated #WalkAway messaging, part of a fake campaign created by Russian bots to get people to think that Democrats are leaving their own party.

In April, following the Parkland shooting, she lashed out against the high schoolers advocating for gun reform, posting a photograph of a pile of Holocaust victims' shoes on Facebook. The caption, according to The Hill, read, "To all the kids that walked out of school to protest guns. These are the shoes of Jews that gave up their firearms to Hitler. They were led into gas chambers, murdered and buried in mass graves. Pick up a history book and you’ll realize what happens when u [sic] give up freedoms and why we have them."

Another post in the same vein questioned whether the youth activists had organized the protests themselves. "So, just wondering, who got the permits and paid for buses for this YOUTH march?" she wrote, according to The Hill, specifically targeting activist David Hogg.

While it's certainly unusual to see someone so close to a SCOTUS justice choose to be vehemently political, it's not technically unethical. According to guidelines written by the National Center for State Courts, a judge's family members are free to engage in political activity as long as they take "every precaution to insulate the judge from direct or indirect involvement." Another set of ethics standards from the American Bar Association says it's fine for family members to endorse political candidates as long as it's clear that the endorsement doesn't come from the judge as well, meaning that Thomas' post praising Trump is also above board.

Permitted or not, however, it's important to note that Thomas' post feeds into a false narrative being pushed by the president and GOP members in the final days before the midterm elections. The caravan of migrants largely consists of refugees looking for asylum, and the president himself has admitted that some of his statements on the matter were not based on readily available facts.