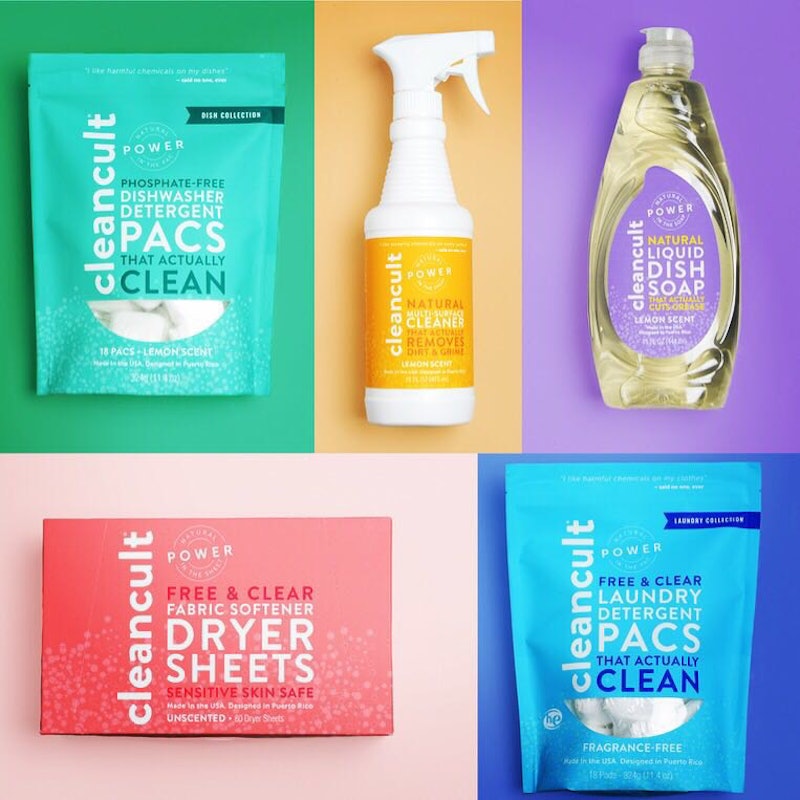 Cleaning your house is one of those activities that's kinda hard to make exciting. We all have to do it, and whether we opt for traditional cleaners or more modern natural options, the end result is ideally the same. But green cleaning company Cleancult is in the midst of fundraising to kick off its non-toxic cleaning product subscription service, and it's actually a very exciting situation.

Folks who sign on for Cleancult's subscription service will get non-toxic products, including an all-purpose cleaner, laundry pods, and dishwasher packs, delivered every one, two, or three months, which takes the guesswork out of all the different non-toxic options at the grocery aisle. But the best part? For each load of laundry purchased, Cleancult will donate one load to someone in need in Puerto Rico, where the products are designed. So far, the company has donated more than 100,000 loads' worth of laundry detergent, and has raised nearly $21,000 on Indiegogo, 52 percent of its $40,000 fixed goal ahead of its July 15 launch.

Being part of the Puerto Rican community is a significant part of Cleancult's business culture, and its one-to-one Laundry for Life program is intended to help rebuild the island following Hurricane Maria. "We give back to the community through laundry because it's an often overlooked part of disaster displacement," Ryan Lupberger, CEO and cofounder of Cleancult, tells Bustle. "When someone moves to a new home, area, or temporary shelter, they often have no way to clean their clothes."

As for designing Cleancult's products in Puerto Rico, Lupberger tells Bustle the island is a "treasure trove of talented scientists, engineers, and top-of-the-line laboratories" because it used to be home to a huge number of pharmaceutical companies, which left the island after changes in U.S. policy in the early 2000s.

Cleancult's complete lineup includes all-purpose cleaner, dishwasher packs, laundry packs, dryer sheets, and dish soap. The company tells Bustle in an email that in the U.S., available traditional cleaning products contain more than 1,500 chemicals "that have been banned or are under review abroad." Cleancult products are all biodegradable, and are plant- and mineral-based, and according to the company, are a step up from many other green cleaners, which "don't offer effective or compelling alternatives" to chemical-based cleaning products.

"Our goal is to inspire and attract the next generation of responsible purchasing by designing responsible products and experiences with which you don’t have to compromise," the company wrote on its Indiegogo page. "We are not owned by a big corporation trying to 'greenwash' but are instead trying to change the status quo. We believe that by basing ourselves in a strong community, listening to our customers, and trying to be leaders and not followers, we can use cleaners as a tool for change in your life... and in your bathroom."

To give you an idea of how much product you get with deliveries, the six-month option includes, spread out over multiple deliveries: three 18-count packages of laundry packs; three 18-count packages of dish packs; three 14-ounce bottles of dish soap; one 80-count box of dryer sheets; and three 16-ounce bottles of all-purpose cleaner.

If you're looking to green clean while supporting a community in need, Cleancult's products will be available on its website starting July 15. Keep calm and clean on.