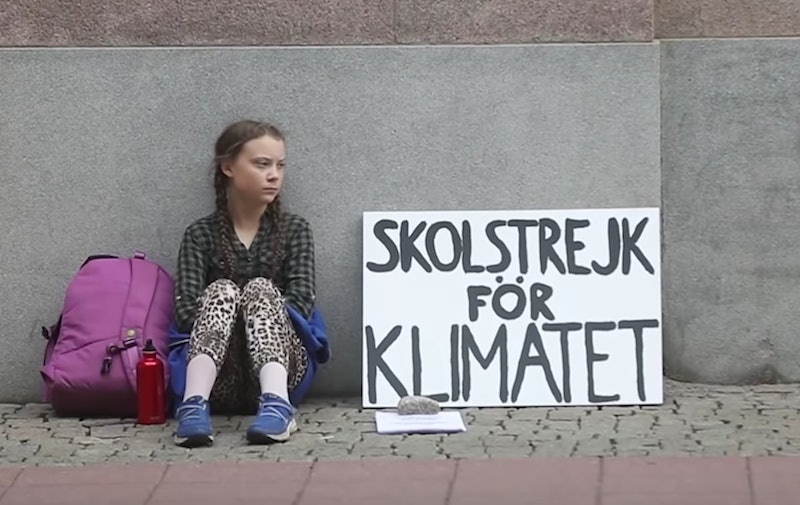 A Swedish teenager who launched a climate protest that spread around the globe wasn't afraid to tell world leaders exactly what she thinks of their inaction this week. Greta Thunberg told the United Nations climate change summit that "our leaders are behaving like children," as The Guardian first reported. The 15-year-old didn't stop there, either.

“For 25 years countless people have come to the UN climate conferences begging our world leaders to stop emissions, and clearly that has not worked as emissions are continuing to rise. So I will not beg the world leaders to care for our future,” Thunberg said at the summit on Monday. “I will instead let them know change is coming whether they like it or not.”

Back in August, the teen began protesting climate change by refusing to go to school until Sweden’s general election the following month in order to bring awareness to environmental issues. She made her objective known by handing out leaflets outside the Swedish parliament building that read, "I am doing this because you adults are sh*tting on my future." Thunberg's protest eventually reached at least 270 cities around the world, with more than 20,000 students joining in, The Guardian reports.

Thunberg took her message to the UN conference in Poland this week, addressing leaders in a meeting with UN Secretary General António Guterres.

“Since our leaders are behaving like children, we will have to take the responsibility they should have taken long ago,” she said. “We have to understand what the older generation has dealt to us, what mess they have created that we have to clean up and live with. We have to make our voices heard.”

The 15-year-old said she hopes that by speaking out, the world will begin to realize that climate change is "an existential threat" and "the biggest crisis humanity has ever faced." First, she said, people have to come to terms with this reality — and then act as fast as possible.

It seems her message got through to at least one UN leader, as Guterres called on his colleagues to build off of the momentum young climate activists' have started.

"Our younger generations will have to help drive and complete the work we start today," Guterres said at the climate summit on Tuesday, per The Guardian. "We need to harness their energy, invention, and political power to raise climate ambition."

Thunberg's efforts over the last few months have made headlines around the world, and she attributes her unwavering attention to fight climate change, in part, to her autism diagnosis.

She has stopped flying in airplanes in addition to helping her family install solar batteries and start growing their own vegetables, according to The New Yorker. But she believes world leaders need to take much stronger action to combat the detrimental affects of climate change.