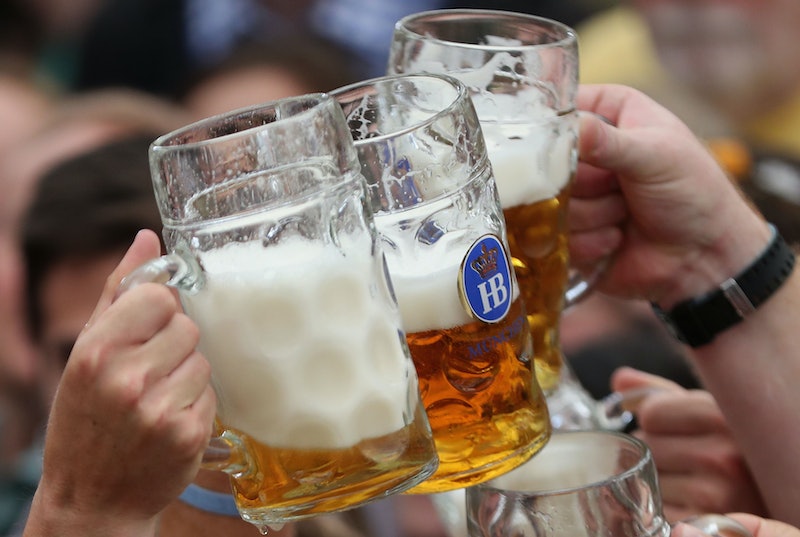 If climate change continues at its current rate without global intervention, scientists anticipate a grim future filled with food shortages, coastal flooding, and intense wildfires in the upcoming decades. But the effects of climate change aren’t just limited to large-scale events — it can also change the little luxuries we take for granted in our everyday lives. A new study shows that beer, the world’s most beloved alcoholic beverage in terms of volume consumed, may become another victim of climate change.

In periods of extreme heat and drought, the production of barley, a main ingredient in beer, declines sharply. Until now, scientists hadn’t specifically looked at how extreme weather as a result of climate change might impact beer production (probably because they had "ecological Armageddon" to worry about). Inspired after gathering in a bar one day, the group of scientists who authored the study became curious about how climate change might impact “luxury essentials,” reported CNN. These luxury goods refer to any items that aren't a necessity, but still play a part in people’s lives, like coffee, chocolate, and, of course, beer.

The study, published in Nature Plants, assessed a crop model and global economic model against projected drought and heat extremes in future climate scenarios. The scenarios ranged from worst-case climate scenario to less severe cases. Unsurprisingly, increasingly widespread and severe droughts and heat courtesy of climate change were linked to substantial drops in beer consumption, along with hikes in beer prices.

Study results indicated that the extreme weather may affect considerable decreases in global barley production, with average losses ranging from 3 percent to 17 percent depending on the severity of the environmental conditions. Decreases in the global supply of that all-important grain mean that there’s less barley available to craft beer, resulting in a global average decrease in beer consumption and a jump in beer prices.

In the most extreme climate scenario, global beer consumption was reduced by 16 percent and beer prices, on average, doubled. Global beer consumption decreased by 4 percent in the least severe climate scenario, with prices jumping up by 15 percent. On an individual level, some “historically beer-loving” countries were noticeably more impacted than others — Ireland, for example, saw a projected increase in beer prices by 193 percent. The U.S. would experience a 20% overall reduction in beer consumption in the worst-case climate change scenario, with the per bottle price increasing by 50 percent.

Less availability of beer in the world is obviously not number one at the top of climate change concerns, and honestly, drinking less beer might have some positive health-related side effects. But the study speaks to a broader point: A beer shortage is just the tip of the iceberg. Staples like avocados and almonds could be next, and these are just some of the ways in which everyday life will be fundamentally changed should the current rate of climate change continue without global intervention from governments and changes in climate policy.