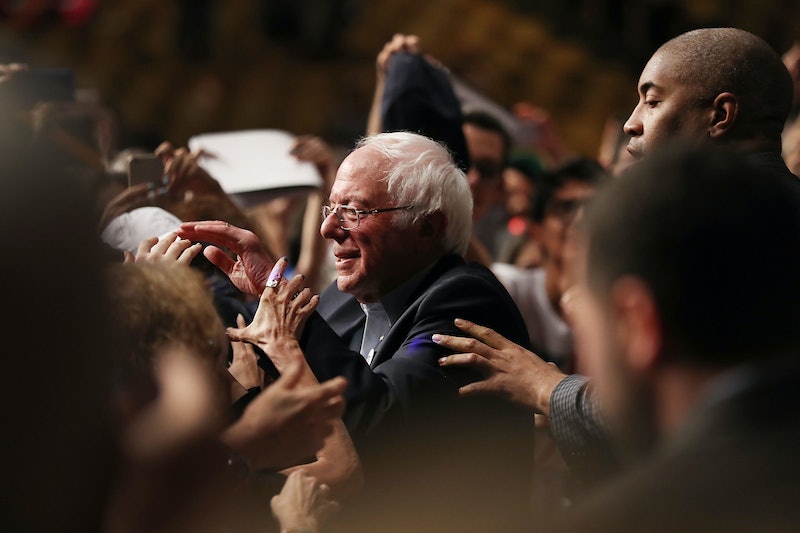 While the midterm elections are more than year away, some of the biggest names in Democratic politics are breaking ground on efforts to drum up support from America’s youngest group of voters right now.

Come June 9, thousands of people will travel to Chicago to take part in The People's Summit, a reunion of the Bernie Sanders coalition driven to action amid the Trump presidency. People for Bernie Co-Founder Winnie Wong tells Bustle millennials will be flooding the event's panels and seminars and that many received scholarships to attend the weekend conference, which Senator Sanders will keynote.

"We're anticipating a large number of millennials to show up in Chicago," Wong tells Bustle. "I know these people are passionate not just about Bernie, but the possibility of transforming this country because they have the most to lose."

Millennials broke decisively in favor of the Independent Senator from Vermont over the last campaign season, with more people under age 30 voting for Sanders than for Trump and Democratic nominee Hillary Clinton combined.

By some measures, Clinton is back to work: She's making the rounds with speaking engagements and interviews and has launched a new Political Action Committee called Onward Together. The group's stated goal is to "advance the vision" of Clinton's 2016 campaign, and it's mission statement is full of anti-Trump buzzwords about resisting "bullying, hate, falsehoods, and divisiveness" through public action, like the Women's March and protests seen at airports nationwide in response to the Trump administration's travel ban.

"Politics happens every day and we have to practice it every day."

Clinton and Sanders aren't the only major players in the Democratic Party looking to launch a second act: On Thursday, former Vice President Joe Biden announced the launch of his new political action committee, American Possibilities. (Political action committees are vehicles for steering financial contributions toward candidates running for federal, state, or local office. Both the Clinton and Biden PACs redirect to webpages soliciting contributions after an email address is registered.)

And yes, the announcement of Biden's new PAC is stoking speculation he may make a run at the White House in 2020.

"It's interesting [Biden and Clinton] are capitalizing on this moment to do their own thing," Wong says. "For Joe Biden to start a PAC and for that to be a news item, that might inspire some amount of relief in Biden supports… [but] for other people, it's out of the news cycle in 24 hours."

According to a poll commissioned in May by the Democratic firm Public Policy Polling, Biden tops Trump in a hypothetical one-on-one matchup by 14 points, at 54-40 percent. Sanders, who is also rumored to be considering a 2020 presidential run, leads the president 52 percent to 39 percent.

If the party's leaders aren't lying low in the off months, activists say there's no excuse for voters.