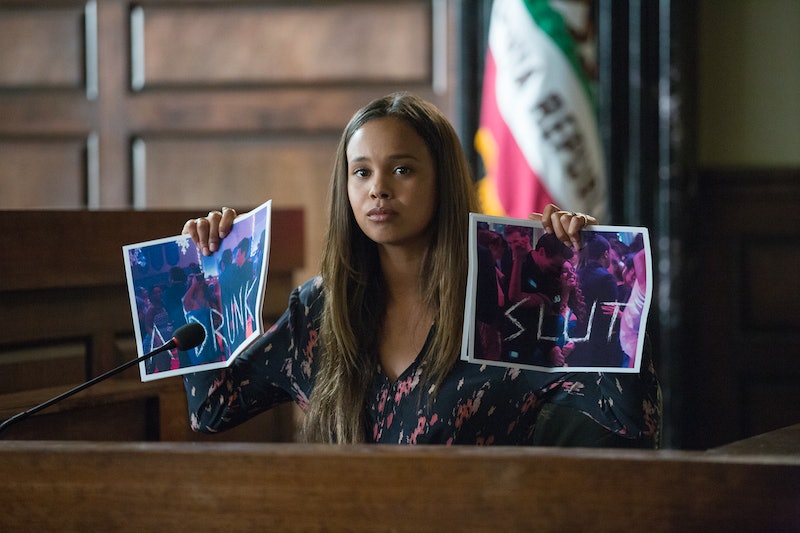 There are SPOILERS for 13 Reasons Why Season 2 ahead. 13 Reasons Why's Liberty High is a toxic environment, as evidenced by the first season of the Netflix series, so it's not surprising that Season 2 begins with new weird set of analog clues used to torment teens. Who's sending the threats and polaroids on 13 Reasons Why? The second season contains a new mystery that the already hurting students are forced to try and solve as they embark on the trial against the school in the aftermath of Hannah Baker's suicide.

That's actually not the only question. The polaroids are one thing, but who's threatening the students? Is it the same person? Different characters receive different types of messages throughout the season, often encouraging them not to testify.

However, it all starts with these pictures. "There will be a new piece of technology for 13-year-olds to Google and try to understand what it was," said creator Brian Yorkey (presumably) about the polaroids on 13 Reasons Why in an interview with Entertainment Weekly. The actual concept of a polaroid isn't too foreign to the students at Liberty High, but they do present a series of challenges. Where did they come from? Who took them? Who has seen them? There aren't copies. What happens when the physical photos are moved, or stolen? Here are the clues about the polaroids and the sender that may help put those pieces together.

Whoever is sending these messages seems to know about the sexual assault happening at school and the content of the tapes. So, for a refresher if nothing else, that list includes: Justin, Alex, Jessica, Tyler, Courtney, Marcus, Zach, Ryan, Clay, Sheri, Bryce, Mr. Porter, Tony, Hannah's parents, their lawyer, and presumably the police.

The Call Is Coming From Inside The House

Since the photos depict girls with jocks, it's likely that the threat is coming from one of the said jocks or someone who is or once was close enough to them to know where they are and what they depict. Clay discovers that they were taken on school property, which is a major clue. Alex hung with these guys for a while. Maybe his memory isn't as bad as he says.

Who They're NOT Threatening Counts

One person who isn't told not to testify is Courtney. Why? In some types of mysteries, this would be a "process of elimination" sign that she sent the pictures. This is probably because her testimony was about an isolated incident, not serial assault. Whoever is sending these polaroids has nothing to lose if she talks.

The Message Is Not Exactly Clear

The polaroids are seemingly encouraging Clay to seek justice against Bryce. The other threats, on the other hand, are not. Plus, Tyler and his new friends are on a series of escalating revenge plots. So the message itself is a clue that the polaroids are not necessarily associated with these other threats. No wonder this mystery is hard to solve. It's not one person doing all these things.

Tyler also hovers his hand over polaroid film at the Bakers' drug store, despite telling Clay that he was above such hipster analog tech. Doth he protest too much, or should fans file that under red herring?

Who is this person???????? Where did he come from???????? This mystery jock, who even Clay doesn't recognize, is named Scott, and the two of them look too alike. These jocks are always flanking Bryce, shushing and miming guns at our heroes. It's quite suspicious.

At the end of the series it is revealed that (major spoiler alert this is your last warning): The polaroids were taken at the clubhouse mostly by Bryce and his friends, and Zach sent some to Clay in hopes that he would take action against Bryce. Monty was intimidating the subpoenaed students with everything from dead rats, to nooses, and death threats. Why he didn't threaten Courtney is unclear, especially as he was involved in the rumors spread about her and Hannah. Meanwhile, Chloe threatened Jessica specifically, and Tyler, as aforementioned, was blackmailing Marcus and the baseball team.

Finally, it was Nina who stole the polaroids from Clay's car and burned them in the final episode. Why? That's a mystery for Season 3, unless some microfilm or floppy discs show up detailing a new conflict first. This complex story is still unfolding and the polaroids were just another piece.