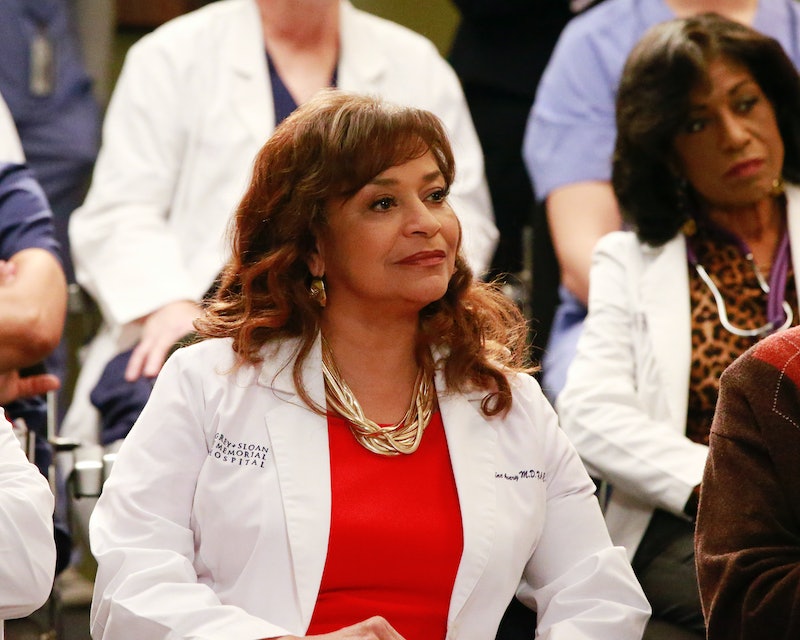 It's been a while since the show's suffered a casualty, and the clues that Catherine dies on Grey's Anatomy are stacking up. In the promo for the Jan 31. episode, Catherine undergoes surgery — and it doesn't seem like it will turn out well for her. At one point while Catherine is on the table, one doctor says, "If we keep going, we cost Catherine her life." That makes it sound like it wasn't possible to get her tumor out. But even if they close her back up safely, her life is still in danger.

Catherine knew her prognosis was bad. She didn't even want to tell her son and husband because that made it too real. And even the top-notch problem solving Grey's Anatomy doctors weren't sure how to approach her tumor successfully. Plus the fact that next episode is being teased as one of the most powerful ones yet makes it seem like a death is certainly looming.

Just like April's exit from the show served to further Jackson's storyline (remember when he went hiking in the woods to, like, figure out the meaning of life post-April?), losing his mom will give him more material to work with too. If only all these women didn't have to suffer to give Jackson Avery more plotlines!

In any case, here are all the clues that Catherine may be Grey's Anatomy's latest death.

It Will Bring Maggie & Jackson Closer

Maggie already lost her mom to cancer, so she can serve as a guide for Jackson dealing with the same thing. Their relationship has been getting better over the last few episodes, but this would really give it a push in the "committed forever" direction. It's hard to go through something like a loss and not want to make sure your other relationships are rock solid.

Bailey and Maggie really connected in Thursday's episode, indicating that Bailey can step in and help mentor and guide Maggie through things if she does lose her would-be mother in law. Bailey can also be a sort of mother figure to Jackson through all this.

Richard Will Be OK Without Catherine

Richard finally starting going back to AA meetings and found himself a new sponsor. That will be extremely important if he does lose his wife after all. If you'd asked me an episode ago if I'd have thought Richard could handle Catherine's passing, I would have said no. But the most recent episode showed him making strides to get his support system back and his life together. Losing Catherine would be a major blow, obviously, but not an insurmountable one.

The synopsis for the next episode says:

"Amelia and Koracick tackle a daunting surgery on Catherine while Richard and Jackson hope for the best. Meanwhile, Richard urges Meredith to visit her father, Thatcher, before his time is up."

Perhaps after Catherine's surgery goes south, Richard doesn't want Meredith to also lose her parent without saying goodbye. It would take a pretty big situation to get Meredith to go see him, and losing Catherine could be it.

Catherine's Storyline Has Kind Of Run Its Course

Hey, this is why April and Arizona were booted from the show. Catherine's cancer storyline is her biggest in a while, and she hadn't been on the show as much in recent weeks before that. Maybe this is just the natural progression of her storyline. It will be a devastating episode, don't get me wrong, but it's not that hard to see coming.

More like this
'Grey's Anatomy's New Intern Got Advice From Dr. Bailey Herself
By Grace Wehniainen
Watch The Thrilling Teaser Trailer Of 'Shadow And Bone' Season 2
By Gretchen Smail and Jack Irvin
If 'Entergalactic' Season 2 Happens, You Could Get A New Kid Cudi Album
By Kadin Burnett
24 Years Ago, 'Friends' Dropped Its Most Underrated Ross & Rachel Episode
By Grace Wehniainen
Get Even More From Bustle — Sign Up For The Newsletter