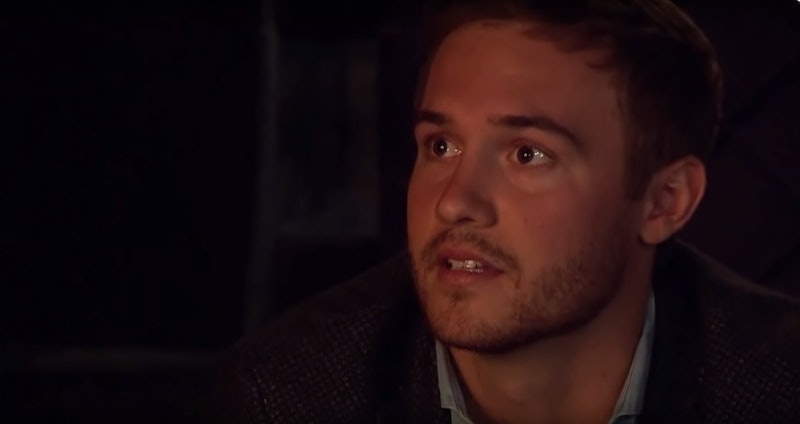 If you thought the wait for Colton Underwood's fence jump was painstaking, the stream of clues that Peter doesn't get engaged on The Bachelor are probably driving you out of your mind by now. The pilot has repeatedly claimed that his ending is impossible to spoil, which has led many to believe that he's currently single, or at least without a fiancé. Although we won't know what truly happened until After The Final Rose airs, there are plenty of hints that Peter doesn't get engaged after his season.

The Last Week Of Filming Was "The Hardest"

According to the season's full teaser, there is drama and hardship ahead for Peter, without a doubt. In the clip, Chris Harrison approaches Peter with some shocking news that changes everything. Some think his final choice could've rejected him and left the show on her own terms.

"That moment was very tough, a very difficult moment for me," he told E! News, referring to the teaser. "That week, hardest week of my life, and you guys will see why." The footage shows that he is clearly holding a ring, but the big news may have blocked its delivery. "I couldn't have expected it to go the way it did," he added. "But it's real life."

Perhaps the ending can't be spoiled because he didn't end up with any of his contestants and instead developed a special bond with someone behind the camera. That's what Reddit user Krallie deduced based off a few photos he and Julie LaPlaca are in together. When the theory went viral, ABC's response was oddly vague.

"I hate to get in the way of a good rumor, so I’m not going to confirm or deny about whether he ends up with a producer," Rob Mills, the network's Senior Vice President of Alternative Series, Specials & Late-Night Programming told Entertainment Tonight. "I don’t know how we’d ever top that though! But, it is crazy. What we’ve seen about the finale over the years is that the 'finale' is really on that night when the show goes live. There’s a lot of craziness, it’s a roller coaster, but I would say even now the roller coaster hasn’t ended, and it won’t end until after After the Final Rose."

He Has Repeatedly Dodged The Engagement Question

Past Bachelors and Bachelorettes have happily confirmed their engagement in press interviews ahead of the season finale. Peter hasn't gone there. Instead, his safe answer to questions about his relationship status has remained that he's "happy."

He Could Be Back With Hannah B.

This is more of a wish for many fans, rather than a solid clue. But there's no denying that Peter's feelings for Hannah came rushing back when she visited him on night one. If they did give their relationship another try, they would more than likely take things slow.