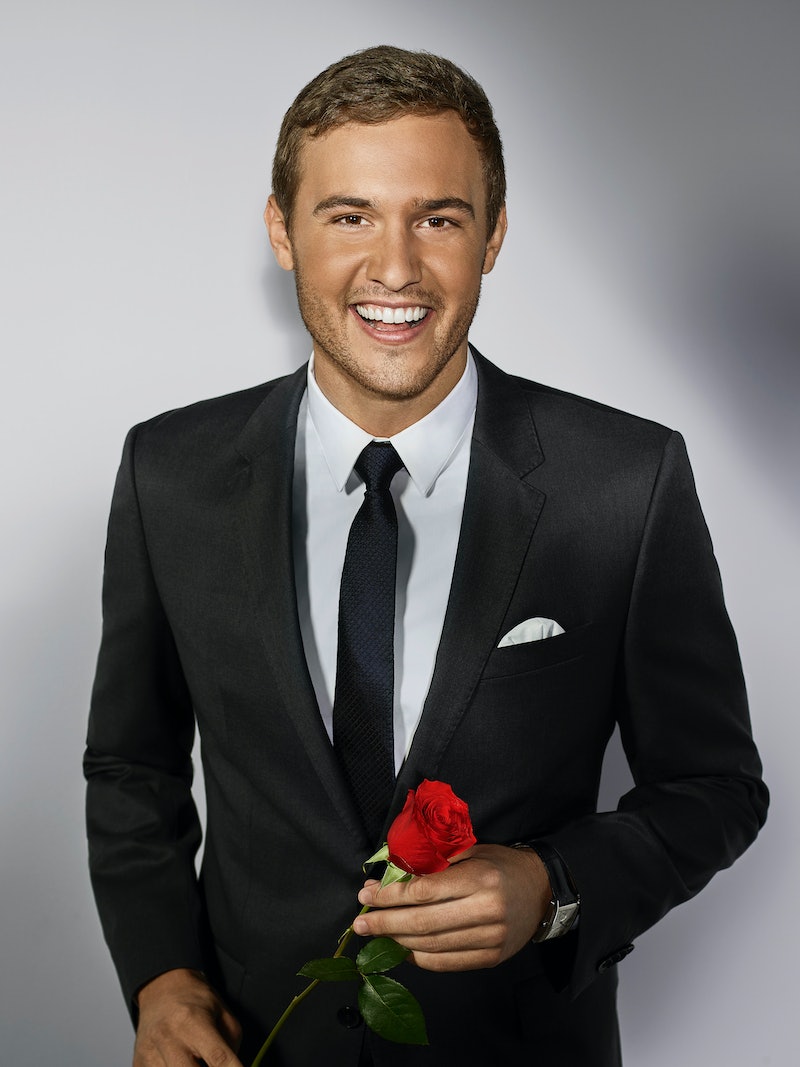 Fans want to know if this pilot is charting a course toward marriage. So, does Peter Weber get engaged on The Bachelor? With the season premiere of The Bachelor airing on Monday, Jan. 6, fans are eager to find out if Peter will end the season with a new fiancé. Peter was first introduced to the franchise as a finalist during Hannah Brown's season, but the star ultimately chose Jed Wyatt. (The two split amid revelations Wyatt lied about a past relationship.)

So far, it's unclear how the star will end his season, though he's left a few hints about his life after the show. On Jan. 2, Peter revealed he still lives at home, but that doesn't necessarily mean he isn't engaged, according to E! News. During an appearance on Rachel Lindsay and Becca Kufrin's podcast Bachelor Party podcast, Peter's parents Barbara and Peter Sr. explained that the situation was not as unusual as it sounds.

"First of all, we are a very, very close family," Barbara said on the podcast. "We support each other in every which way, and we're each other's best friends, not just parents." She added that Cuban families like her own often live together long-term, saying, "In old time Cuba, the kids would be at home and in their 20s they would get married, and they would still live at home."

Peter's premiere is expected to include a few unconventional twists — including Brown's return — but since the former Bachelorette was filming Dancing With The Stars, it doesn't seem likely the two ended the season with an engagement.

Even so, The Bachelor host Chris Harrison promised the season would have a "wild, turbulent ending", keeping with the show's recent trend of unconventional finale episodes, according to THR. He added, "It is a turbulent, wild, emotional, gut-wrenching ride right up until the very end. You won’t predict how this comes to a conclusion." So, will Peter end up choosing to be single at the end of the season, much like Hannah Brown? Or, like Colton Underwood, will he opt out of an engagement, but end the season in a relationship?

Fans might be in for a long wait, as it seems ABC has taken extra precautions to prevent details from getting out. On Jan. 3, Peter promised his Bachelor season would be spoiler-free, noting that not even popular gossip sites such as Reality Steve are likely to get their hands on the final outcome, according to The Hollywood Reporter. "I’m very confident that no one is going to be able to spoil it," he said. "There’s a reason I believe that, and obviously can’t say it otherwise it gives it away."

More like this
Hannah Ann Got Engaged 3 Years After 'The Bachelor' & The Proposal Was Dreamy
By Grace Wehniainen
'The Bachelor' 2023 Schedule Differs From Last Season In 1 Key Way
By Grace Wehniainen
This ‘Bachelor’ Spoiler Teases The Dramatic Self-Elimination Of A Fan Favorite
By Grace Wehniainen
Zach Swears He Didn’t Look Up Contestants Before The Bachelor Began Filming
By Brad Witter
Get Even More From Bustle — Sign Up For The Newsletter
From hair trends to relationship advice, our daily newsletter has everything you need to sound like a person who’s on TikTok, even if you aren’t.