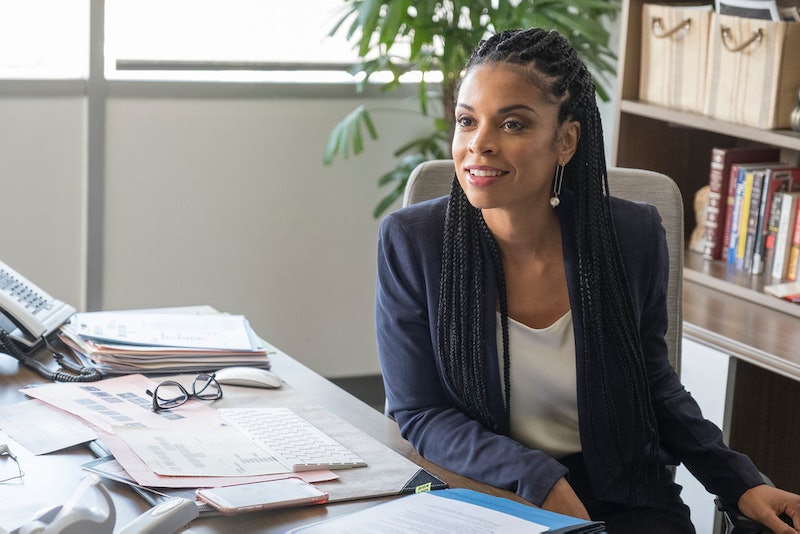 Now that the mystery surrounding Jack's death on This Is Us has been largely wrapped up, the NBC drama is planting new seeds of mystery for its viewers with the help of flash-forwards into the future. Last season, there was a scene in which a much older Randall and Tess emotionally discuss needing to go visit a mysterious "her," though details of who exactly they're talking about, and the circumstances of the visit, remain unclear. Theories abound, but clues that Beth is "her" on This Is Us could change everything we know about the Pearsons' future.

For starters, Randall and Tess are the people closest to Beth — and they seem pretty torn up about whoever they're going to see. Particularly in the case of Tess, who says she's "not ready" to embark on the visit, it feels like she might be talking about her mother. It also seems odd that Beth wouldn't be with Randall and Tess if she's not the person in question.

In an interview with The Wrap, Sterling K. Brown also said that there was a reason Tess was shown in the flash-forward, and not the couple's other daughters, Annie and Deja. "Yes, there’s a reason why he had to seek out Tess in particular, because Tess hadn’t seen the 'her' for some time," he told the outlet. "And so there’s a reason why it’s time to go and she’s like, I can’t.' There’s a reason. Other people may have been more easily galvanized, but Tess needed a little more coaxing." That definitely sounds like a rift that would arise between a mother and her oldest daughter — really, who else in the family has the potential to have this much conflict with Tess?

Another potential hint can be gleaned from the poster for Season 3 itself. An eagle-eyed Reddit fan, ah_rosencrantz, pointed out that in the official poster, only Jack and Beth appear to be looking directly at the camera, while the others are looking far away, or just to the side. From this, the user drew comparisons between Beth and Jack that put an interesting spin on themes the show has been peddling from the beginning. "My theory is that Beth is the 'her' that will have died by the time of the [flash forward] in the Season 2 finale, putting Tess, Annie, and Deja in the role of the Big Three dealing with the loss of a parent."

In a flash-forward this season, Randall also calls Toby about coming to see "her." Though many have taken this to mean Kate is the woman in question, that seems a little too obvious, especially with the focus recently placed on Kate's ongoing health risks with IVF. There is another possibility to be drawn: while Beth and Toby haven't had a ton of screentime together, they're both outsiders who married into the Pearsons, and have bonded over that in the past. If Beth was dead or otherwise in a bad spot, especially years in the future, it might make sense for Toby to come visit.

And to that point, Brown did say in the same interview with The Wrap that it shouldn't seem odd to fans for Toby to be deeply involved in whatever Randall and Tess are going through. "Toby is part of our family now. So anybody who Randall cares about, Tobias would obviously care about as well. That’s my brother," he said.

In an interview with Entertainment Weekly, Brown assured fans that "her" is a woman viewers have seen in the show prior to Season 3, which takes some other obscure theories of a brand new character off the table. "It is someone that we have met over the first two seasons, so it won’t be something that comes out of nowhere," he told the outlet. So we're working with a finite number of possibilities, making Beth even more of a candidate.

Susan Kelechi Watson, who plays Beth, has previously said that Beth isn't going to die during her tenure on the show. That could mean that all of these clues mean nothing, but it could also mean that her death accompanies a series end, or happens far in the future even as Beth lives on in the main storyline. There's no way to confirm anything, especially with how tight-lipped this cast is accustomed to staying. But at least right now, it feels like Beth could be more deeply intertwined in this mystery than anyone can anticipate.