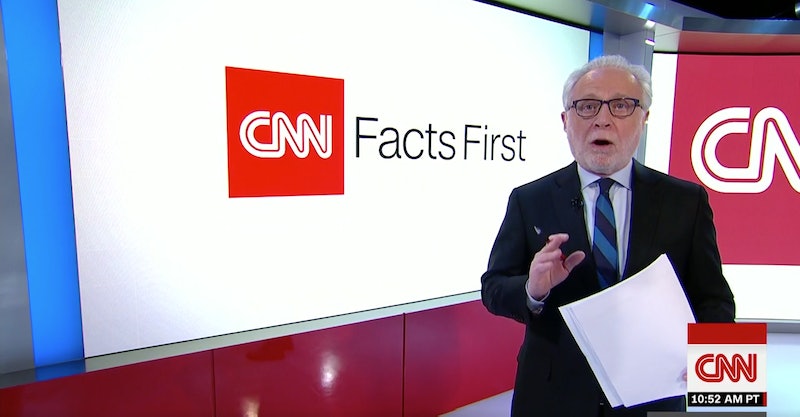 When you're constantly under attack, it might be tempting to hit back. But when the president of the United States is on the offense, and you're a news organization, the proper way to do so might seem like a mystery. Now, however, CNN is skipping the White House Christmas Party for the press, which is scheduled for Friday at 2 p.m. EST. And it's definitely an appropriate way to retaliate against Trump's attacks.

Politico reported Tuesday that the cable news network would not be attending. "CNN will not be attending this year's White House Christmas party,” a spokesperson for the network told Politico. “In light of the President's continued attacks on freedom of the press and CNN, we do not feel it is appropriate to celebrate with him as his invited guests. We will send a White House reporting team to the event and report on it if news warrants.”

And that was just fine with the White House. "Finally, good news from @CNN," Sarah Huckabee Sanders tweeted, linking to the news from Politico. That might be a worrying development if the relationship between the network and the administration weren't already so tense.

CNN made the decision shortly after Trump attacked the network yet again over the weekend. "CNN International is still a major source of (Fake) news, and they represent our Nation to the WORLD very poorly. The outside world does not see the truth from them!" Trump tweeted after a trip to Asia. He seemed annoyed that Fox News was not the top network outside of the country, adding "@FoxNews is MUCH more important in the United States than CNN."

On Monday, Trump continued, "We should have a contest as to which of the Networks, plus CNN and not including Fox, is the most dishonest, corrupt and/or distorted in its political coverage of your favorite President (me). They are all bad. Winner to receive the FAKE NEWS TROPHY!"

Now, other countries are using the fake news line against the network for reporting things they did not care for. For example, Libyan media and diplomats have used the president's attacks to question the reports from the country on the modern slave trade there. And Egypt's Ministry of Foreign Affairs attacked the network for its coverage of the Sinai mosque attack.

CNN has responded, both on Twitter and in broadcasts. "For nearly four decades, @CNN has been a constant here in the United States and around the world. Our journalists, in front of and behind the camera, risk their lives in the most dangerous of places, every day, so you know the truth," the network posted to Twitter with the hashtag #FactsFirst.

Then anchor Wolf Blitzer addressed the issue on air, noting that journalists risk their lives behind and in front of the camera. "CNN and CNN International are not sponsored by any state, nor any autocrat, nor any political organization, and despite the constant criticism from the president, we are unwavering in our mission, free and independent as the press should be," he said Monday.

Most worrying of all is that the next attack on CNN may not come in the form of words but rather action from a government agency. AT&T was told by the Department of Justice that for their acquisition of TimeWarner to go through, the company would need to sell CNN. "It’s all about CNN," one person involved with the talks claimed to The Financial Times about the about the merger negotiation with the DOJ. AT&T, though, doesn't seem likely to budge.

The DOJ officially moved to block the merger last week in court. That could be unrelated to Trump's feud, but analysts say the move is unusual given other similar mergers that have been approved in recent years. For now, though, all CNN can do is boycott the Christmas shindig.