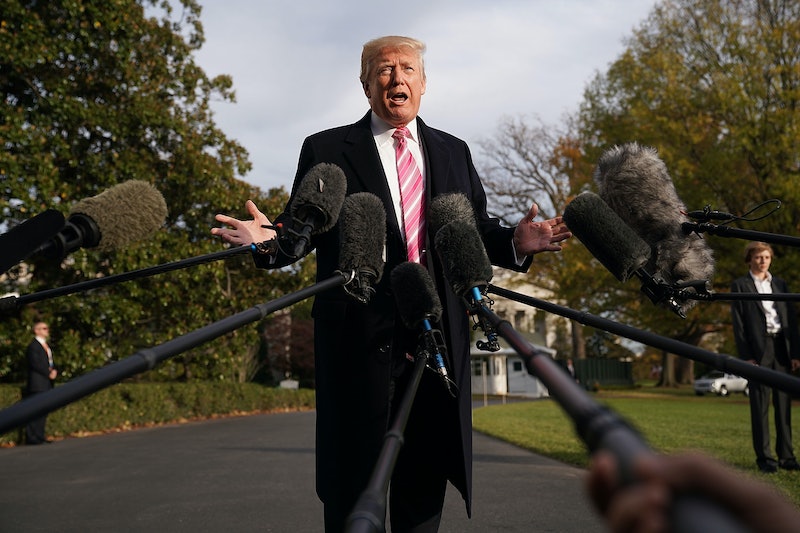 The repercussions from a Thanksgiving weekend tweetstorm in which President Trump denounced CNN for representing "our Nation to the WORLD very poorly" are being felt just days later. According to media and political figures, authoritarian regimes are now attacking CNN after Trump's tweets, questioning the network's reporting and credibility.

In a tweet sent Sunday, the spokesperson of Egypt's Ministry of Foreign Affairs wrote that CNN's coverage of the Sinai mosque attack last week was "deplorable," and that the network's anchors were "more interested in reporters access to Sinai than in those who lost their lives."

The tweet was notable for a number of reasons. Egypt's government is, as the Carnegie Endowment has noted, known for "propagating conspiracy theories and populist narratives as a prime strategy for maintaining its control of society." Further, the ministry's use of the word "deplorable" — an adjective often used as a self-descriptor by the president's own supporters — demonstrates that Egypt's tweet about CNN was an all-too-familiar attack on the network.

The tweet from Egypt's Ministry of Foreign Affairs came in response to CNN's coverage of a Sinai mosque attack that killed hundreds last week, which included interviews with some victims who were critical of the government's response. CNN reported that "at the hint of criticism, hospital volunteers ushered in an army officer to move out journalists."

Days later, in an interview with CNN's Christiane Amanpour, Egypt's Foreign Minister Sameh Shoukry said he appreciated the network's continued coverage, however, adding that a free press is "important."

Still, the ministry's tweet has yet to be deleted. As London School of Economics fellow Brian Klaas pointed out, illustrates that Egypt's authoritarian government was "following Trump's cue to attack CNN. When the President of the United States demonizes the press, despots listen—and celebrate."

On Monday, Klaas wrote that Trump’s attacks on the press are "a gift to awful regimes who are following Trump’s cue and calling all negative news 'fake.'"

Egypt's isn't the only government to apparently take a cue from Trump's claims that CNN peddles "fake news." On Tuesday, Arabic Al Aan TV's Jenan Moussa tweeted a link to an article from a Libyan media outlet purportedly questioning the authenticity of CNN's report on the slave trade in the country — a direct result, apparently, of Trump's tweets.

Moussa added that the piece, which is in Arabic, is titled, "Trump says CNN lies... what about the 'slavery' report from Libya?," and explains: "After Trump's tweet, legal steps could start to sue the channel (CNN) in international courts for its reports."

Trump has repeatedly taken issue with CNN's reporting (particularly when the reporting is unfavorable to him) calling the network “fake news,” and "garbage journalism.” In July, the president tweeted an edited video clip of himself tackling a figure with a CNN logo superimposed on its head. He has also retweeted an image of a cartoon "Trump train" running over a CNN logo.

In a series of posts over Thanksgiving weekend, however, Trump took it a step further — arguing that Fox News is "MUCH more important in the United States than CNN, but outside of the U.S., CNN International is still a major source of (Fake) news, and they represent our Nation to the WORLD very poorly. The outside world does not see the truth from them!”

Trump continued his attack on Monday in a tweet: “We should have a contest as to which of the Networks, plus CNN and not including Fox, is the most dishonest, corrupt and/or distorted in its political coverage of your favorite President (me). They are all bad. Winner to receive the FAKE NEWS TROPHY!”

As CNN senior international correspondent Clarissa Ward noted on Monday, these sort of verbal attacks on the media serve to embolden those who may be hostile to the west: "it sends a message very clearly that even our own president is volubly and publicly disparaging us, it’s open season on journalists, and it’s okay to come out and say that we’re a joke.”

Former United States ambassador to the UN Samantha Power noted on Tuesday that the President's attacks on the media in his own country "are doing incalculable damage, and — whether on Libyan slaves or other life-or-death issues — he is encouraging others to deny truths around them."

Many have argued that Trump's attempt to discredit the media is juvenile. But worse is that it appears to have given a free pass to other governments to do the same, in essence, to legitimize attacks on the press.