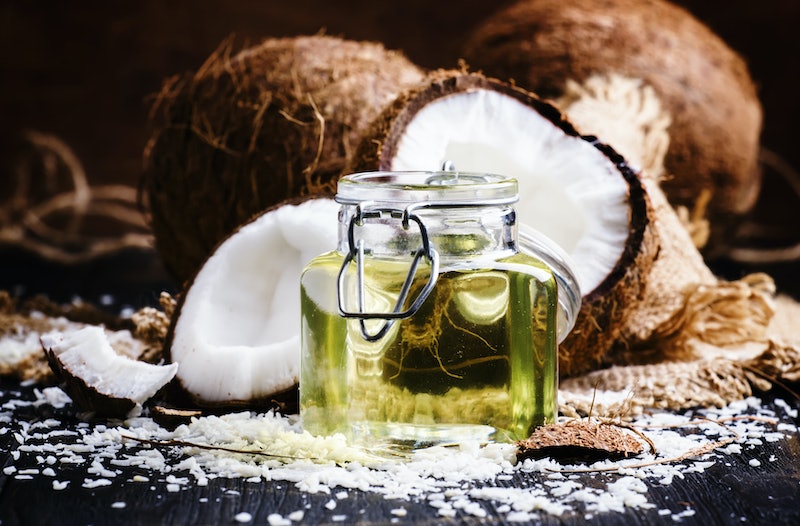 Coconut oil has been heralded as the go-to cure for just about everything wellness-related, but in a viral video that’s reached nearly 1 million views, Harvard professor Karin Michels called coconut oil “pure poison,” shocking many people who generally think of coconut oil as being healthy. Michels, an adjunct professor at the Harvard T.H. Chan School of Public Health, delved into the myth that coconut oil is healthy in a 50 minute lecture in German entitled, “Coconut Oil and Other Nutritional Errors.” The video was originally posted in July, but recently went viral.

While there’s no shortage of articles and lists praising the substance for its supposed benefits for the immune system, digestion, and as a healthier oil for cooking, there is actually little scientific research backing many of these claims, which Michels explains in the lecture. But before you start throwing your jars of coconut oil in the trash, it's important to know a little bit more context on the claims.

“I don’t know if I would call it ‘one of the worst things,’” New York-based registered dietitian nutritionist, yoga teacher, and author of The Small Change Diet Keri Gans tells Bustle in an email. “But it does have a health halo surrounding it that is unwarranted.”

Strikingly, 72 percent of Americans rated coconut oil as a “healthy food” in a 2016 survey by The New York Times, compared with 37 percent of nutritionists. The disconnect between expert opinions and the general public’s knowledge can be “attributed to the marketing of coconut oil in the popular press,” explained a report by the American Heart Association (AHA). With celebrities like Chrissy Teigen raving about the stuff, it’s easy to see how coconut oil became so popular.

"Some marketers of coconut oil point out that it has antioxidants, which can keep your body’s cells from breaking down too quickly," Tamara Melton, a registered dietician nutritionist and co-founder of Diversify Dietetics, tells Bustle. "This is true for extra-virgin coconut oils, but is also true for other extra-virgin oils (like olive). Other benefits are that coconut oil is good for your skin and hair — which definitely may be true for some people, and in no way is that harmful."

But coconut oil is very high in saturated fat, says Gans, and a substantial body of research supports that the consumption of high amounts of saturated fat may raise LDL cholesterol, increasing a person’s risk for cardiovascular disease. According to the American Heart Association (AHA), 82 percent of the fat in coconut oil is saturated. For reference, that’s a higher amount of saturated fat than butter (63 percent), palm oil (49 percent), and pork lard (39 percent), USA TODAY reported.

Gans adds that there are no proven benefits of using coconut oil that have been backed by strong scientific evidence, though some small studies “have shown promise that might of lead to the positive attention.” Melton also says, "It’s important to remember that when people are making these claims, the studies they may be referencing may be small studies that have not been validated."

However, Dr. Kenny Davin Fine, a gastroenterologist, tells Bustle that “concerns over plant oils cannot be equated with those over saturated animal fats.” He says that new studies are necessary to assess the risks and benefits of saturated plant oils, including coconut oil and palm oil.

So, while it may not be the health cure-all it’s been cracked up to be, coconut oil isn’t necessarily a “poison,” either. “Coconut oil can definitely be enjoyed in small amounts as an overall part of a healthy diet, but clearly not as a silver bullet,” Gans says. She recommends including coconut oil in a diet alongside other oils like olive oil, avocado oil, and flaxseed oil, which are all rich in monounsaturated fats that have been associated with a decrease in heart disease. At the end of the day, coconut oil, like all food, is probably best used in moderation. "Since no one food will make or break your diet," Melton says, "it is very true that all foods can be included in a healthy diet — including coconut oil."