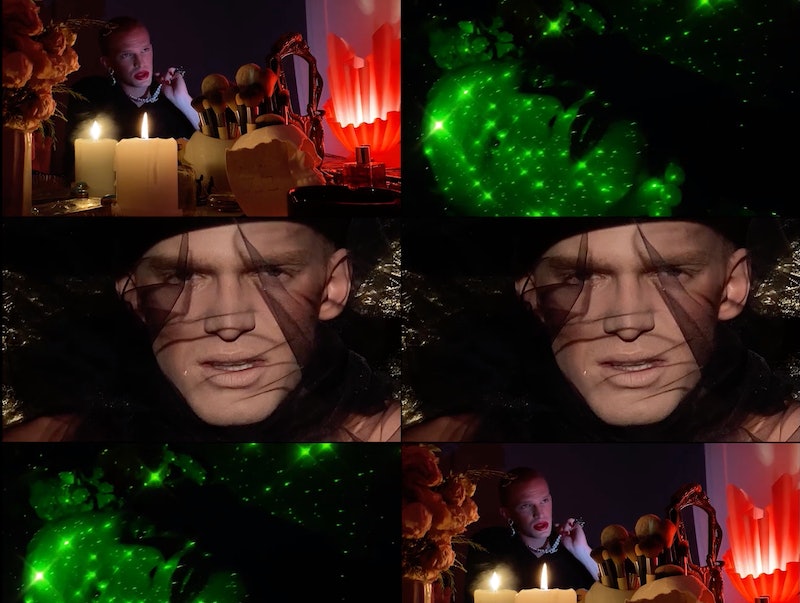 Gender norms are changing by the day, and luckily, more artists are embracing the much-needed shift in the definitions of masculinity and femininity. Case in point: Cody Simpson's new music video, directed by Miley Cyrus, features the artist doing drag. "captain's dance with the devil," released on May 22, is Cyrus' directorial debut. And, as Simpson tells Bustle, she was a major inspiration for him to incorporate drag into the video, something he hopes will inspire others to express themselves freely and "be whoever they pleased."

Simpson originally wrote "captain's dance with the devil" as the story of a teenage heroin addict, but Cyrus saw it as something completely different. "She kind of took it as the captain's struggle with masculinity and societal expectation or standards that he'd be expected to meet," he explains.

Separately, the singer was on his own gender-bending journey, partially inspired by Cyrus' admiration of the art of drag (they often watched RuPaul's Drag Race in quarantine). He decided to try it out for himself and asked Cyrus to help him master makeup. "We were just hanging out in our bathroom and she was re-organizing her collection of lipsticks and makeup," he says. "We got into this whole conversation about the history of make-up and the art of it. I proceeded to ask her to make me up, and she ended up doing my whole face of makeup."

Simpson's curiosity about makeup coupled with Cyrus' interpretation of his single inspired the artist to incorporate drag into his music video, which Cyrus took and ran with. She even did his makeup for the shoot.

Filmed in lockdown at their home, the video sees Cyrus' interpretation of the song come to life: Simpson plays a lost boy in isolation breaking gender stereotypes via experimentation, sporting gender-bending fashion, complete with bold makeup looks. To execute their vision, with no stylists or crew to rely on, the couple created looks out of vintage and archival clothing from both of their closets and used personal belongings laying around the house to create a set.

As for how Simpson would rate his girlfriend as a director, he says she's a natural. "As she puts it, she's been directed so many times in her life that she kind of had the inherent knowledge of being able to direct already," he said. "I think we both trusted each other enough to just let it roll."

What resulted is a fantastical, dreamy look at a heartbreakingly relatable story. "The story of this captain battling with his struggle, his affinity for dressing as a woman... there's many, many people out there that can relate to it," he explains. "Even in a more broad sense of... not feeling like they have the freedom or bravery to approach and confront mass public opinion and conventional thought." It's a sentiment that he hopes will be reflected in his future work.

More like this
5 Wild Theories About Miley Cyrus’ “Flowers” Music Video
By Jake Viswanath
Twitter Is Roasting Liam Hemsworth Thanks To Miley Cyrus' New Song “Flowers”
By Jake Viswanath
"Lavender Haze" Star Laith Ashley Breaks Down Filming With Taylor Swift
By Jake Viswanath
Linda Ronstadt’s “Long Long Time” Plays A Pivotal Role In The Last Of Us
By Brad Witter
Get Even More From Bustle — Sign Up For The Newsletter
From hair trends to relationship advice, our daily newsletter has everything you need to sound like a person who’s on TikTok, even if you aren’t.