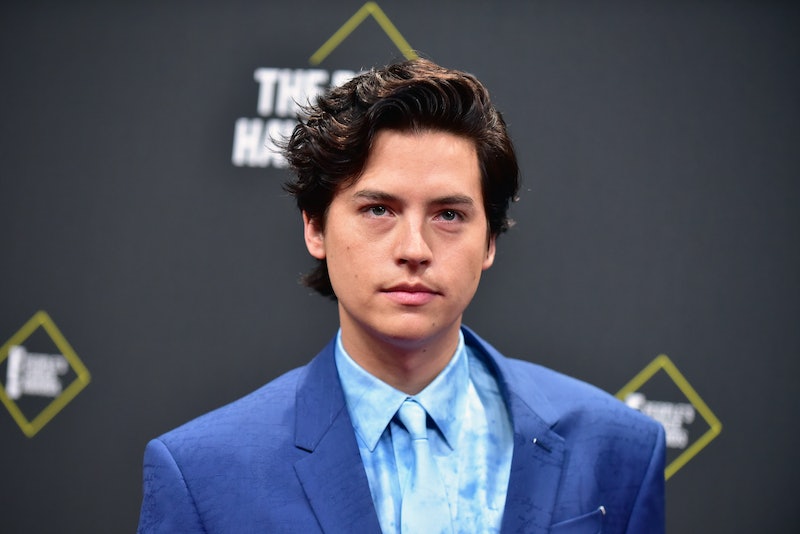 Cole Sprouse may have recently broken up with Lili Reinhart, but he's spending his time in quarantine with another one of his Riverdale costars. During a recent virtual interview with AP Entertainment, Cole Sprouse gave a Riverdale update while quarantined with KJ Apa in Los Angeles. And though he didn't comment on his relationship status, he did reveal how the current coronavirus pandemic will affect the teen drama going forward.

"Our show is the exact kind of rubric which is going to come under a scrutinizing lens in terms of how things are gonna to change technically," Sprouse said, before revealing that any of Bughead's future scenes together might look a little different when the show returns. "I mean, the nature of romantic scenes are going to change quite a bit."

The actor also cited things like on-set catering, and the amount of people present on each soundstage as other aspects of filming that will be affected, once production resumes. "What kind of stages you're allowed to shoot in are gonna have to change ... The amount of background they're allowed into shots is gonna change quite a bit," Sprouse continued.

"Our show is one of those shows where we are deeply involved with all of the new regulations that are put upon a production cycle. So, I am incredibly interested to see how it works." Season 5 of Riverdale will premiere in January 2021, as the CW has decided to delay its fall 2020 schedule due to ongoing concerns over the coronavirus. It's unclear when production on new episodes will begin.

Of course, Season 5 will also look different for Sprouse as he and costar Lili Reinhart reportedly broke up after three years together. "Cole and Lili split before the pandemic hit, and have been quarantining separately," a source told Page Six, shortly after news of the breakup first broke, though they added that the pair "remain good friends."

While neither one of them have publicly commented on the split, Sprouse's twin brother, Dylan, recently gave Entertainment Tonight an update on how the actor is holding up after the breakup. "I mean, he’s living," Dylan said, before revealing that the Riverdale star has been getting plenty of support from his costar during quarantine. "Him and KJ in the very beginning of quarantine ended up staying together at KJ's place in Los Angeles," Dylan revealed. "So, they’re isolating together, which is very cute."

He continued, "[Cole is] good. He's getting healthy, he’s relaxing, and I talk to him every day. We still FaceTime every day, for every year of my life." These may be uncertain times, but at least Cole and Dylan Sprouse's relationship will always remain a steady constant.

More like this
'The Queen’s Gambit' Season 2 Tweet Wasn’t From Anya Taylor-Joy
By Mary Kate McGrath, Jack Irvin and Grace Wehniainen
Everything You Need To Know About Kanye's Post-Kardashian Dating Life
By Bustle Editors
'Bridgerton' S3 Will Show A *Very* Different Side To Kanthony
By Sam Ramsden
Netflix Shut Down 'Bridgerton' S3 Rumours About A “Very Dark” Storyline
By Bustle
Get Even More From Bustle — Sign Up For The Newsletter
From hair trends to relationship advice, our daily newsletter has everything you need to sound like a person who’s on TikTok, even if you aren’t.