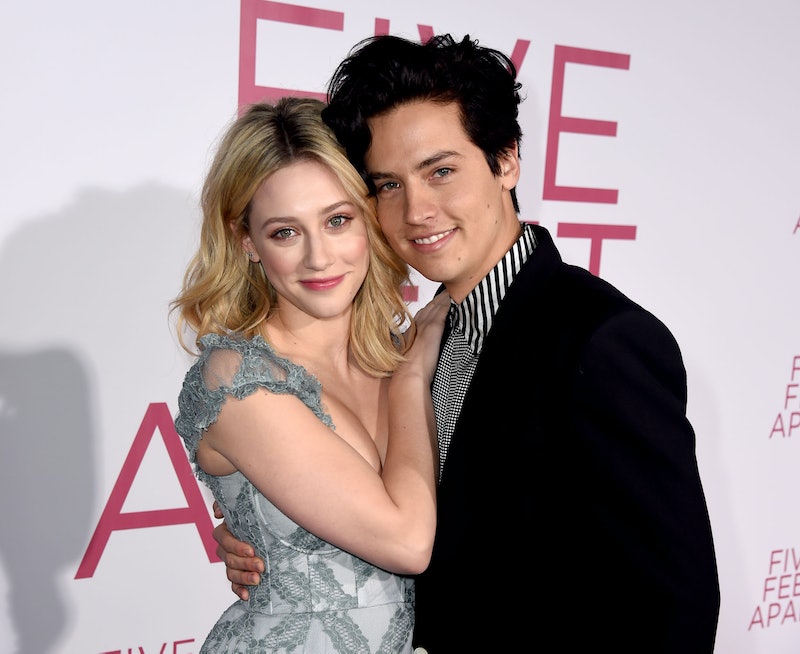 Bughead is no longer together — in real life, that is. Riverdale stars Cole Sprouse and Lili Reinhart have reportedly split after three years of dating. While neither star has officially confirmed the news, PEOPLE reported on Monday, May 25, that the couple are currently broken up, but "tend to be on and off." Bustle reached out to representatives for both Sprouse and Reinhart, but did not receive an immediate response.

This isn't the first time the couple has been rumored to have called it quits. Sprouse and Reinhart were previously reported to have split back in July 2019. But just days later, while unveiling their joint W Magazine cover, they denied the rumors by poking fun at the media coverage. "BREAKING: A reliable source has confirmed that none of you know sh*t," Reinhart captioned her post, while Sprouse joked in a now-deleted post, "UNPRECEDENTED: Cole Sprouse and Lili Reinhart consume the flesh of 'reliable sources' to fuel their bacchanalian sex cult."

While the actors are currently not filming Riverdale due to the coronavirus pandemic, and are quarantining separately as per Page Six, Reinhart admitted that a split could potentially make things awkward between her and Sprouse on set. "If and when we break up on the show, I don't know," she told W Magazine in 2019. "It's weird being with an actor. You deal with sh*t no one has to deal with."

Riverdale fans started rooting for Sprouse and Reinhart to get together after they connected with their onscreen characters, love interests Jughead Jones and Betty Cooper. The couple were first romantically linked in 2017, after Sprouse posted some portraits of Reinhart photographed by himself on Instagram. But they were hesitant to confirm their relationship publicly until they walked the red carpet at the 2018 Met Gala together.

Just a month before their reported split, Sprouse defended himself against "baseless accusations" on his Instagram Story amidst rumors that he had cheated on Reinhart, and said that he wouldn't tolerate false speculation. "When I first stepped into a public relationship this was one of the foreseeable consequences," he wrote in April. "And while I truly never intended to indulge any part of my private life to the ravenous horde, it's clear my restraint in updating them has allowed them to push their own agenda onto my habits and lifestyle." Reinhart also defended Sprouse at the time, calling on fans on Twitter to stop vilifying him.

More like this
Hilary Duff's Husband Matthew Koma Has Her Name Tattooed On His Butt
By Jake Viswanath and Stephanie Downs
Everything To Know About 'Only Murders In The Building' Season 3
By Gretchen Smail and Kadin Burnett
Daryl McCormack Has A Very Special Lady In His Life
By El Hunt
Keke Palmer Shares The Sex Of Her & Darius Jackson's Baby
By Jake Viswanath
Get Even More From Bustle — Sign Up For The Newsletter
From hair trends to relationship advice, our daily newsletter has everything you need to sound like a person who’s on TikTok, even if you aren’t.