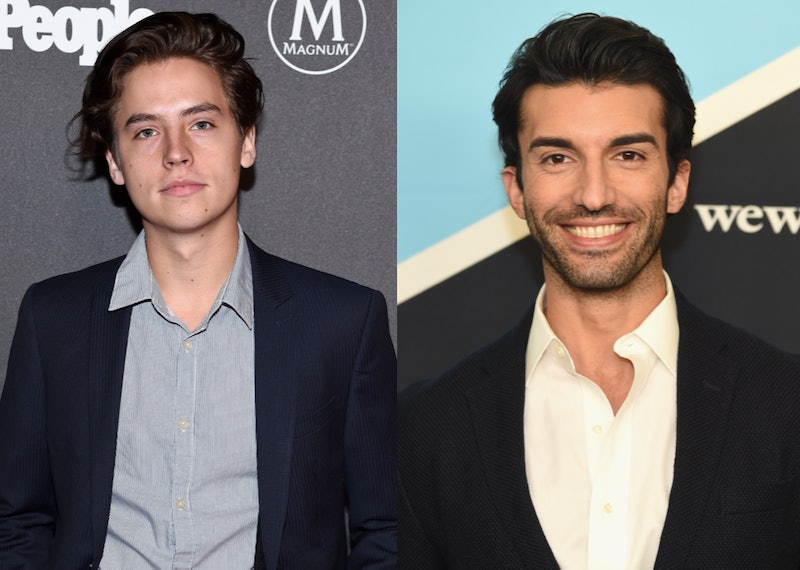 If you're a fan of CW, you'll probably love this movie. Riverdale's Cole Sprouse will star in Jane The Virgin's Justin Baldoni's feature directorial debut, Five Feet Apart, according to The Hollywood Reporter. The romantic drama won't just be a first for Baldoni, who's previously helmed documentaries, but will also mark Sprouse's first feature film as an adult.

The movie, written by Mikki Daughtry and Tobias Iaconis, will tell the love story between two young people suffering from terminal illnesses. While that might sound like a bit of a tearjerker, THR reported that the film is described as being "uplifting and about the people who help make every moment count as well as the transcendent power of love." Basically, Nicholas Sparks better watch out, because this may become the new A Walk To Remember.

Sprouse will reportedly play half of the lead couple in the movie, which will start filming this spring. As for Sprouse's onscreen love interest, no word on who will play that role, but keeping with this CW theme, maybe they can cast the Betty to Sprouse's Jughead, Lili Reinhart? As Bughead fans are already well aware of, the two have some killer chemistry onscreen and off. Even if Sprouse and Reinhart don't want to admit they're dating, those recent photos of them getting cozy in Hawaii together seem to say it all.

Sprouse is currently making a name for himself on TV for the first time without his twin brother, Dylan. The two starred in the Disney Channel series, The Suite Life Of Zack & Cody, for three years before starring in the ocean-bound spin-off, The Suite Life On Deck from 2008 to 2011. Adding to the ever-growing list of firsts for his upcoming movie, Five Feet Apart is also the first live-action film Sprouse has ever done without his brother.

After making his big screen debut alongside his brother in Adam Sandler's 1999 film, Big Daddy, Sprouse appeared in 12 movies. The two last appeared in 2009's The Kings Of Appletown as cousins who witness a murder. Sprouse's most recent movie was the animated direct-to-video feature Kung Fu Magoo.

Like Sprouse, Baldoni is best known for his TV work playing Rafael Solano on Jane The Virgin, but he's had small roles in films like The House Bunny and more recently appeared in the upcoming movie, Con Man.

As for his directorial work, Baldoni has gotten behind the camera for the documentary webseries, My Last Days. Each episode focused on a person with terminal illness and how they were choosing to live, knowing it was on borrowed time. But more importantly, all six episodes looked at how these people were using their time to give back.

In a statement for My Last Days, Baldoni said the series was an "inspirational look at what happens when we detach from the material things of the world and live fully in the moment." It was also his way of reminding people that "each and every one of us has the power to choose happiness and to make a difference — regardless of the hand we’ve been dealt.”

This is perhaps why Baldoni earned the directing job on Five Feet Apart. Clearly, it's a topic he's familiar with, and he's been able to turn stories of sadness into something inspirational. No doubt, his upcoming movie, like the webseries, will have viewers reaching for the tissues.

Of course, Five Feet Apart will allow fans to see what their favorite CW stars can do on the big screen. After all, who wouldn't want to see an even bigger version of Sprouse? Just don't forget the Kleenex.