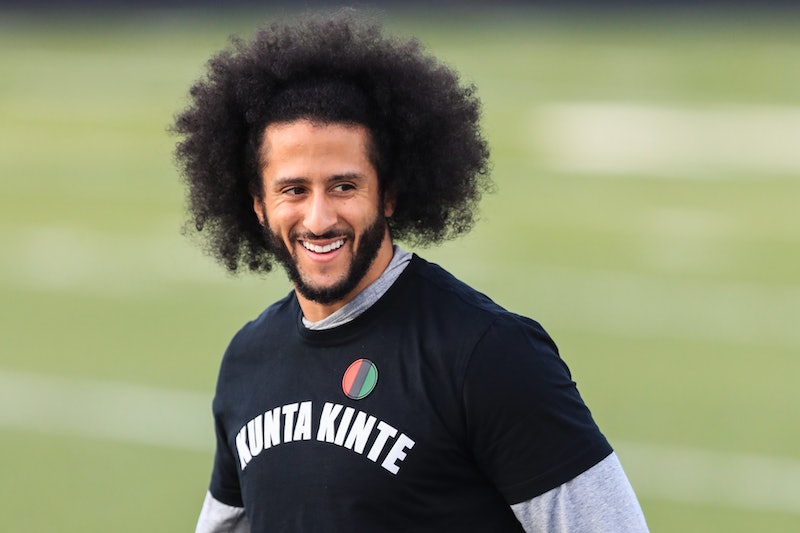 There may be rumors currently circulating about his potential return to the NFL, but Colin Kaepernick might be busy with a new project of his own — and it has nothing to do with football. On Monday, June 29, Netflix announced Kaepernick and Ava DuVernay are teaming up for a limited, six-episode series titled Colin in Black & White, which will focus on the former football star's formative years in high school to help provide insight into how he ultimately became the man — and activist — he is today.

Michael Starrbury, who worked on Netflix's critically acclaimed show When They See Us, will reunite with DuVernay, serving as a writer and executive producer of the project, while Kaepernick will appear as himself and serve as the narrator. As per the press release provided to Bustle, the series seeks to provide "an introspective look at Kaepernick’s early life as a Black child growing up with a white adopted family and his journey to become a great quarterback while defining his identity."

Kaepernick made headlines back in 2016 when he started kneeling during the national anthem before games as a way to protest police brutality and racial inequality, which received mixed reactions from the public and ultimately led to him leaving the 49ers and going unsigned for the next football season and beyond.

Considering the ongoing fight against racial injustice that is currently dominating the country right now, DuVernay thinks it's more important than ever to highlight Kaepernick’s background and story to get a better sense of the man behind the movement.

"With his act of protest, Colin Kaepernick ignited a national conversation about race and justice with far-reaching consequences for football, culture and for him, personally,” DuVernay said in a statement, as per the press release. “Colin’s story has much to say about identity, sports and the enduring spirit of protest and resilience."

For his part, Kaepernick is equally excited to see this collaboration with DuVernay be brought to light and show the public a side of himself they've never seen before. “Too often we see race and Black stories portrayed through a white lens,” Kaepernick said in the press release. “We seek to give new perspective to the differing realities that Black people face." He added, "It’s an honor to bring these stories to life in collaboration with Ava for the world to see.”

No official release date has been set, but it's clear that Kaepernick is only just getting started when it comes to using his elevated platform for the greater good in this ongoing fight against systemic racism. And he doesn't need the NFL to do it.