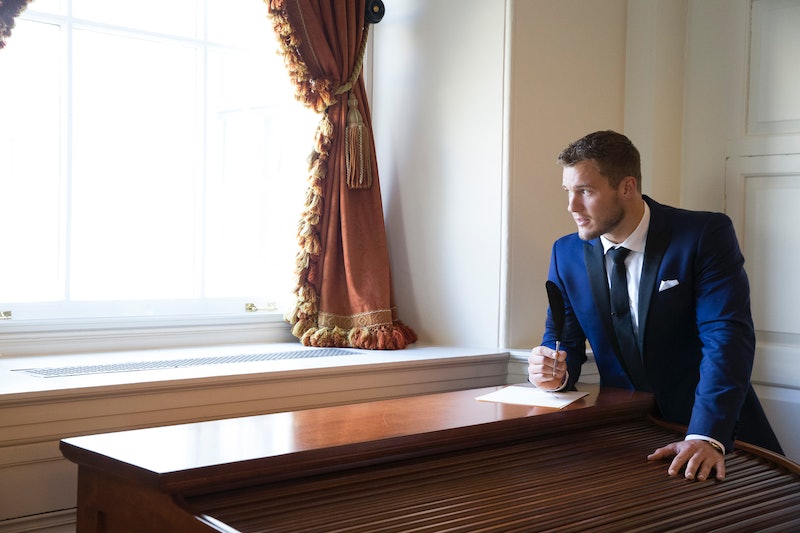 If you can believe it, The Bachelorette is one week away from hometown dates. One! (Can I get an amen?) But before that, we have to deal with the mishegoss of sending home two more guys from Becca’s team. Colton seems like a frontrunner, but he has a big announcement for Becca that might change things: Colton is a virgin, and he finally told Becca on The Bachelorette.

It seems as though this was a mystery to, uh, no one except Becca. All of the other men knew about it, and of course, they spent some time speculating about how she'd take his disclosure after Becca pulled Colton out of a Bahamian hotel room for a one-on-one date. You know that The Bachelorette plans these dates really specifically, because Becca and Colton were on a boat when a man pulled up with another boat and encouraged them to dive for conch shells in the sea. Why? They’re an aphrodisiac… or something? Oh, Colton. You are so out of your league here. It just really added to the awkwardness of the moment, especially because Becca kept saying things like “Colton knows how to work that conch.” Then, I threw up.

When Becca says, "he would have to drop a crazy bomb on me for me to not give him [a rose]," you know it's on. Really, though, Becca took Colton's news in stride. "I spent a lot of time working on football Colton," he said, and because of that, Colton didn't have time to date. That makes sense, and due to his professional focus, Colton is a virgin. Becca's reaction was, "Really?" And Colton explained his need to keep it close to the vest, saying:

Becca was suddenly overcome with emotion and walked out, but it seems like ABC asked her to take a walk just for dramatic effect. That said, Twitter users have opinions about Colton's story and most... don't think it's a huge deal.

A lot of vitriol was directed towards Becca for getting up and walking out a la Arie in his season of The Bachelor, but seasoned fans should wise up — The Bachelor loves to do that kind of stuff for dramatic effect! At the end of the date, Becca gave Colton a rose, telling him that she really wants to meet the people that made Colton Underwood. She will get her wish next week.

When it comes down to it, it sure seems like no one cares that Colton is a virgin. Why should we? I know that he's on a national television show talking about his sex life, but it's none of our business to begin with. Colton's sexual history, should he choose to share it, is something that he has to deal with — not anyone else. He was pretty brave to share something that personal in front of such a large audience. Will it affect his chances with Becca? So far, it hasn't. And if Colton stands by his word of it being a "heart thing" and not a "marriage thing," this whole thing could be over in the Fantasy Suite in a few weeks. Only time will tell.