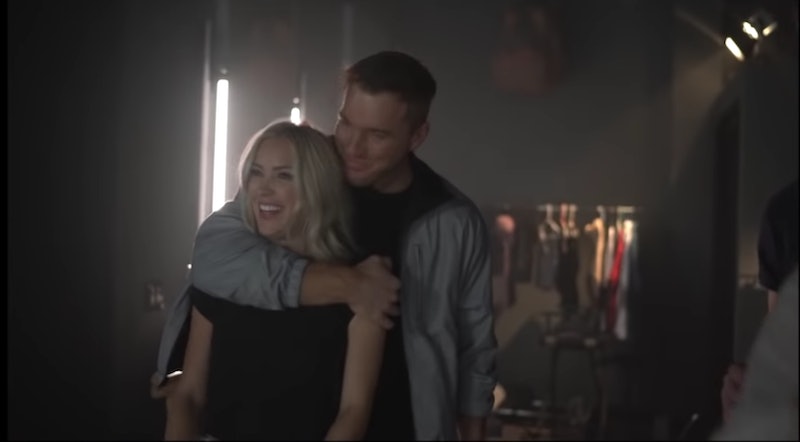 Colton Underwood and Cassie Randolph may have fallen in love on national television, but their first music video appearance is actually an homage to the time before they were household names. Colton and Cassie star in Adam Doleac's music video for "Famous," in which the former NFL player plays a big-time actor who is taken by a pretty production assistant — played by Cassie — while on set. Despite falling in love in the public eye, however, the couple told Cosmopolitan that the reason they were so excited to appear in the music video is because "Famous" reminds them of their pre-Bachelor days.

"This song actually really resonates with us, because before The Bachelor, our lives were just so simple," Cassie told the outlet. "I feel like we were just normal, simple people, but then all of a sudden, people call us famous and that’s how we took the song." According to Colton, the couple first heard the track while on a trip to Aspen with his parents; they loved it so much that they shared it on Instagram, which inspired country singer Doleac to reach out and ask them to appear in the music video.

In a new Instagram post to celebrate the video's release on Nov. 1, Colton echoed those thoughts, sharing that he and his girlfriend "often think about how we would have met each other outside of The Bachelor." Alongside a series of candid, romantic photos from the "Famous" set, Colton wrote, "Would I buy her a drink? Would I bump into her on the beach? Would she play hard to get? (Of course) ... It’s about not doing the predictable thing, it’s about taking a chance and being bold."

While their brush with fame ultimately brought Colton and Cassie together, the former Bachelor contestant recently told Us Weekly that it has been a bit of a struggle adjusting to life and love outside of the mansion. “It was a lot of changes, for sure, because we went from these more simple, more normal lives and then all of a sudden, we film a show and then you’re thrown into craziness where everyone is very hyperaware of everything that goes on in your life and your relationship," Cassie said. "It was a little bit of a struggle at first, I think — like adjusting to everything. But I feel like now we’ve kind of gotten used to it and learned to balance everything a lot more."

While there is a great deal of pressure that comes with dating in the public eye, Colton does think that there is one good thing to have come out of their new status as celebrities. “I think you learn to communicate too," he told Us. "Just with whether it’s tabloids or someone speculating a certain thing or people reading into your body language, you know. You just learn how to communicate with each other and you’ll be on the same page with everything going on."

Fittingly, the pair have also found that their shared love of country music has helped ground them in the midst of all of the chaos and attention that comes with post-Bachelor life. "For us, country music holds a special place in our heart," Colton told People, adding that working on the "Famous" video was "like a flashback to the Bachelor days."

He continued, "It was sort of one of the first things we really bonded over. Not a lot of people know, but on our date in Thailand [during my season] we had weather issues. And we sat in a boat and listened to country music for a while, while the rain delays were going on."

From their first dates on The Bachelor to starring in a music video, it's seems that country music has been an important part of Cassie and Colton's love story.