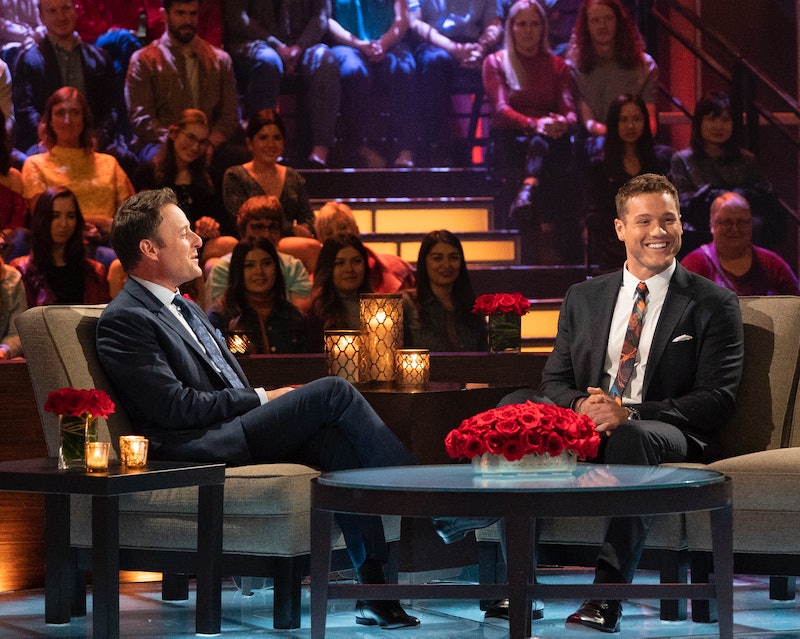 The Bachelor finales are always full of drama, but his year it seems like it's been amped up way more than before. With the "jump heard around the world" last week, and painfully awkward breakups on Part 1 of the Bachelor finale on Monday, March 11, these last few hours of the season were already poised to be the most dramatic of the series. However, things were taken to a whole new level when Colton Underwood came out to talk to Chris Harrison in the live part of the finale on Monday night, and debuted a brand new haircut. Despite a lot of — mostly negative — feedback online, Colton defended his Bachelor finale haircut on Instagram following Part 1 of the two-part finale, and showed that he's gonna do him, no matter what the audience things.

Colton may have broken up with Tayshia Adams and Hannah Godwin on Monday, but the real news was all about his new look. Colton's hair looked a little darker and featured a very structured, vertical swoop in the front that caught a lot of viewers' attention. While it might not have bothered some, a ton of people on Twitter commented on it, starting some memes and of course poking some fun. And, after seeing the reaction online, The Bachelor took to Instagram to show the haters that he's fine with how it looks. "Just left part 1 of the finale. I love you all so much. Say what u want about the hair. I like it," he wrote.

For reference, the whole time on the show, Colton's hair has been softer-looking, a bit fluffier, and definitely not sticking out at the front. So it seems like he's trying something a little different, and it might be hard to debut such a different style on national television. He also commented on Twitter, writing, "My hair looks good. Chill."

Despite Colton's adamant defense of his new hairstyle, it's doubtful Twitter will be convinced. A few pointed critiques and comparisons made during the finale included There's Something About Mary — a side-by-side not easily forgotten.

It even looked scarily like Cassie's dad's spiky locks, according to fan @john4201.

Even a few of Colton's Bachelor Nation co-stars called him out for his new look. During the live finale, Harrison invited former Bachelorette hopefuls Jason Tartick, Blake Horstmann, Ben Higgins, and Garrett Yrigoyen on stage to discuss Colton's tricky decisions. During a lull in the coversation, Tartick tentatively asked, "Did we talk about Colton's new hairstyle tonight?" Harrison turned it over to the rest of the group, asking for their thoughts on "the new hairdo," and Higgins immediately responded. "He walked by back there, and I had to close my eyes because it was about to [poke my eyes out]," he joked. "It sticks out real farther." Luckily, everyone left the taping with their eyeballs in tact. And, jokes aside, the truth is that Colton isn't hurting anyone with his new 'do. Unless, of course, he doubles down and makes it even more spiky for Tuesday night's live finale Part 2.