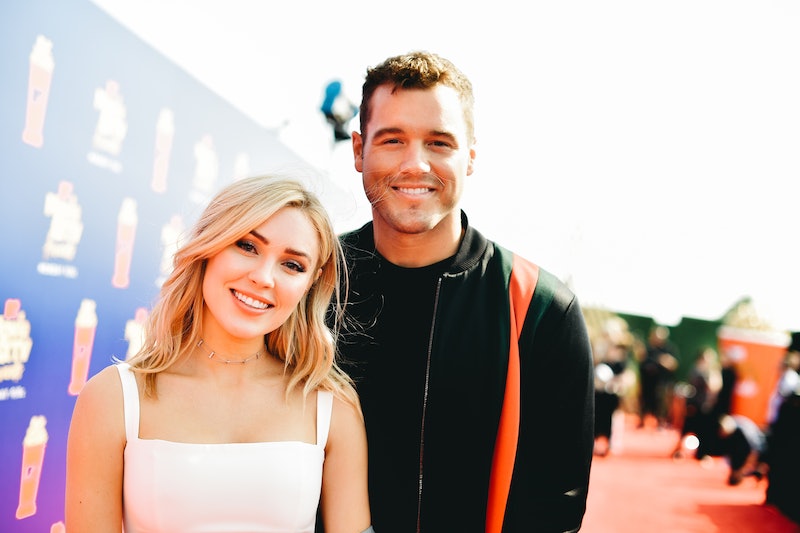 This Bachelor couple may have recently called it quits, but they'll always have a permanent reminder of their time together. On June 18, Colton Underwood and Cassie Randolph reportedly got post-breakup tattoos together during a fun evening with mutual friends. The former Bachelor shared a photo of himself getting inked on Instagram. In the picture he appeared to be on a balcony while enjoying a glass of wine on Thursday night. That same day, Cassie's sister Michelle reportedly shared a photo of her sister getting a matching tattoo with her from the same artist on the same night.

"A glass of red, some art and good friends!" Colton captioned the photo, though he didn't reveal what, exactly, he had tattooed on his arm. While Cassie didn't share a photo from the evening on her own social media account, Us Weekly reports that her sister Michelle shared some snapshots on her Instagram Story. "Last night @cassierandolph & I did a thing," Michelle captioned one photo, which featured the reality star getting a cross inked onto her pinky.

However, despite their friendly relationship, Bachelor Nation shouldn't read anything into Colton and Cassie's decision to get inked together. According to Us, Colton and the Randolph sisters were joined by Michelle's boyfriend, Gregg Sulkin and actor Rhenzy Feliz for the festivities. "It was just a bunch of meaningful tattoos and a really nice, chill night with friends," a source told the outlet.

On May 29, Colton and Cassie announced that they had broken up a little over a year after the dramatic finale of his season of The Bachelor. "Cass and I have been doing a lot of self-reflecting. Sometimes people are just meant to be friends - and that’s okay," the former NFL player wrote on Instagram, alongside a black and white photo of the former couple relaxing on a boat. "We both have grown immensely and been through so much together — so this isn’t the end of our story, it’s the start of a whole new chapter for us."

Cassie echoed those sentiments in an Instagram post of her own, where she explained that they will "remain a part of each others lives," even though they were no longer a couple. "With all that we have gone through, we have a special bond that will always be there," Cassie wrote. "I love Colton very much and have an enormous amount of respect for him. We have both learned and grown so much these past couple years, and will always have each others back. Always."

Their breakup came shortly after Colton was diagnosis with and recovered from COVID-19, which both he and Cassie chronicled on their social media accounts. The former Bachelor was quarantined with Cassie and her family when he got sick, and shared on Instagram that both she and her mother had been taking care of him during his illness. In early April, Colton announced that he had tested negative for COVID-19, but appeared to still be staying with the Randolph family through the end of the month.

On April 27, Colton wrote a touching birthday tribute to his then-girlfriend on Instagram, writing that he was "a better man for loving you." Alongside a video montage of the couple goofing off, he continued, "there are a million things I can say here about how great you are, but I’d rather keep that between us. thank you for being you and letting me share this last year with you. ... Can’t wait to make more memories."