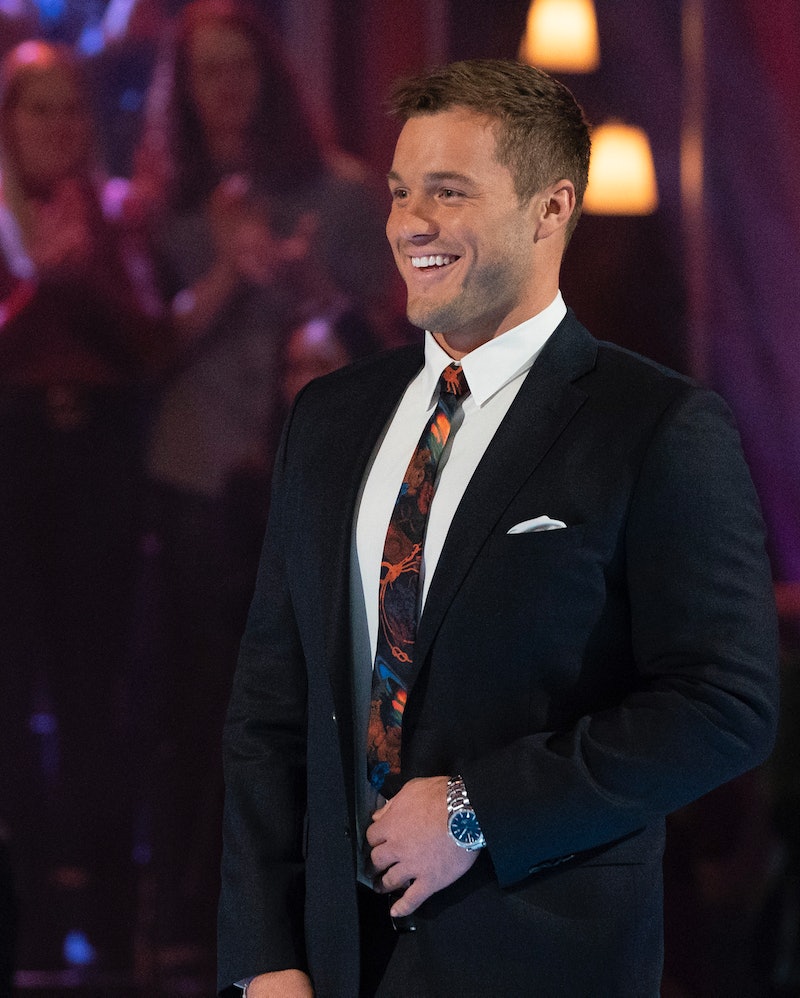 From epic fence jumps to nonstop virginity jokes, Colton's season of The Bachelor was truly an unforgettable experience, for better and for worse. And while his journey didn't end in an engagement (or even a Final Rose ceremony, for that matter), he and Cassie appeared to be very happy together when they appeared on the finale Tuesday, March 12. However, now that the season is over and all the footage has been shown, some fans can't help but notice that something is still amiss. In fact, Colton's Bachelor finale has fans looking at this final rose promo in a whole new way.

Throughout every given Bachelor season, promos are released to help tease all of the drama and heartache that is still to come. It's a great way to make extra use of the footage while also enticing fans to keep tuning in every week. But it seems as though at least one scene from Colton's promo clips was actually a complete lie, and could have been filmed with the sole purpose of faking all of us out. Given everything else that happened during the two-night finale, many of you probably even forgot to anticipate this particular moment, but one eagle-eyed viewer is here to remind you that this tease was a total misdirection on the show's part.

Bustle reached out to ABC for comment regarding the history of how this scene even took place, but had yet to hear back at the time of publication.

Twitter user @sariconner2 posted a screen grab from one of Colton's Bachelor promos late Tuesday night, once the finale was over, that showed the former Bachelor holding an engagement ring box, clearly waiting to propose to someone. Typically this wouldn't be thought of as a very big deal. This is The Bachelor, after all, and proposals are bound to happen at some point, especially during the Final Rose ceremonies.

But that's the thing — Colton never had a Final Rose ceremony. He never even took the time to pick out any engagement rings because he knew he wanted to be with Cassie, who was nowhere near ready to accept a marriage proposal. So why was Colton filmed as if he was waiting for his future wife to arrive so that he could get down on one knee to pop the question? Bachelor producers are absolute pros when it comes to editing clips to make things seem more dramatic than they actually are, but this scene never even took place at all, so what gives?

If you're a little fuzzy on the promo itself, take a look around the 1:45 mark to see the snippet in full:

The promo, which was released in early February, has been raising eyebrows on Twitter for quite some time. Some eagle eyed viewers even zoomed in on the ring box to check if it was actually empty (and from the looks of it, it really might be).

Perhaps the show didn't want fans to suspect that the season wouldn't end with an engagement, so opted to film this fake out scene to help forego any spoilers. Or maybe the empty ring box was a hint that Colton's season wouldn't end how fans might have hoped. But regardless, it's definitely a hilarious realization to look back on. Colton and his snazzy blue suit are full of lies in this scenario, and honestly, it was pretty great to see Twitter call him (and the show) out on it — all in good fun.