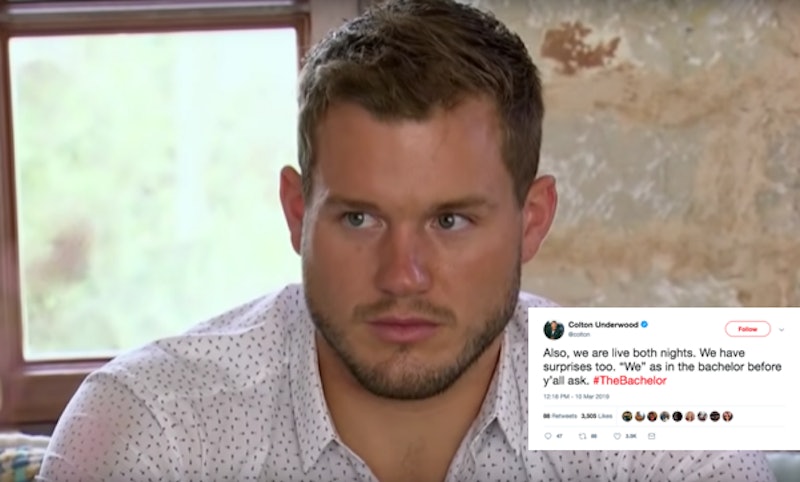 Following Colton's much-anticipated fence jump, there are a lot of questions to be answered during this week's Bachelor finale. He clearly chose Cassie, but not only do we need to know what, if anything, will become of their relationship, but how he'll break the news to the remaining women. Like, will there be a final rose ceremony, or did Colton's fence hop completely alter the show's usual structure? Chris Harrison has been saying all season that nothing like this has ever happened in Bachelor history, and for once, he's actually not exaggerating.

As you can imagine, the promos for the two-night finale have been strategically edited so that viewers can't tell what Colton's next move will be. Obviously, he ends up returning to the show after jumping the fence, but what takes place after that remains to be seen. On the one hand, he could decide to continue moving forward with his remaining two contestants, Tayshia and Hannah G., despite the fact that he clearly loves Cassie. On the other hand, he could follow his heart and attempt to win Cassie back. In the promo, Colton is seen knocking at someone's door. Will it be Cassie on the other side? It's definitely possible.

Unless you can see into the future, there's no way to tell for sure how the rest of the season will play out. That being said, it seems very unlikely that Colton will carry on with the other two contestants as usual. That fence jump changed the game, not only for him but for Tayshia and Hannah G. as well. It'd be hard to believe Colton would feel right proceeding with either relationship when he already declared his love for Cassie so passionately only a few hours prior. No one wants to be anyone's second choice, so it wouldn't be fair to them and Colton knows that.

The finale will air over a four-hour time period on both Monday, March 11 and Tuesday, March 12. That means we have a lot of ground still to cover, but as for whether or not a final rose ceremony will be part of the equation, odds are that the answer is no. As great as Colton's final two women are, they aren't who he really wants to be with. He wants Cassie and now that she's gone, having any sort of rose ceremony would be wrong on so many levels. Colton will probably tell them what happened, they'll share a tearful goodbye, and then proceed to leave the show. Anything more than that would feel completely forced and disingenuous.

It may have been hard for Colton, but the Fantasy Suite dates opened his eyes to who he wanted to be with. And while it might not align with the traditional Bachelor time table, that's kinda how this whole love thing works. It's hard and unpredictable and frustrating and wonderful all rolled into one. So yes, the rose ceremonies have more than likely come to a close, but Colton's journey may not be over with just yet.