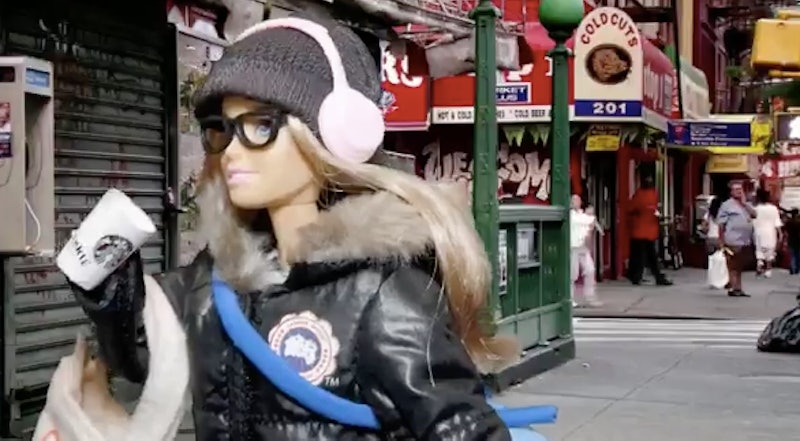 Of all the "it me" moments I have had in my lifetime, none have been quite as intense as this: introducing Commuter Barbie, the brainchild of New York comedians Carina Hsieh and Claudia Arisso. Commuter Barbie, introduced to her adoring public by way of a cheesy, nostalgic mock "ad" with ACTUAL CHILDREN that the Hsieh and Arisso cast, is you, and me, and every woman who has ever commuted anywhere (but aggressively every woman who has ever endured the MTA).

Commuter Barbie wears headphones to blast podcasts over dudes yelling creepy things at her ("But if she can't hear the catcallers, how will she know to smile?"). Commuter Barbie glares at manspreaders even though it will do little to no good. Commuter Barbie barely stops her Commuter Body from tipping over from the full heft of her metal water bottle, her Strand book bag, the Trader Joe's groceries she spent two hours waiting in line to buy, and a backpack so full of nonsense that in any other situation would be worn exclusively by 17-year-old boys going camping for the weekend.

Commuter Barbie is the Millennial generation's inheritance; the hero the MTA deserves, but not the one that it needs right now.

For real, though, the amount of detail that went into this is insane. The itty bitty Strand bag, the teensy-weensy Starbucks cup, the microscopic copy of The New Yorker with an AD FOR SLACK ON THE BACK OF IT. The part about her bajillion apartment applications and how she'll "never make 40 times her rent" was so personal it felt like a legit ATTACK. Commuter Barbie might be a little too real, y'all.

Hseih and Arisso told Gothamist the inspo for Commuter Barbie came when the site of a canvas bag from the Strand bookstore "set off a PTSD flashback to every canvas-lined rush hour commute we ever had."

"We don't think we're Commuter Barbies, if only because we can't afford $800 Canada Goose jackets," said Hsieh to Gothamist. "But aren't we ALL a little bit Commuter Barbie?"

Unfortunately, odds are if you're reading this right now, then you literally are Commuter Barbie-ing as we speak. Le sigh. If anybody needs me, I'll be crying into my Millennial Pink pillow with my phone on vibrate so I know when my Seamless delivery guy has arrived in one hand and an aggressively full glass of Three Buck Chuck in the other.