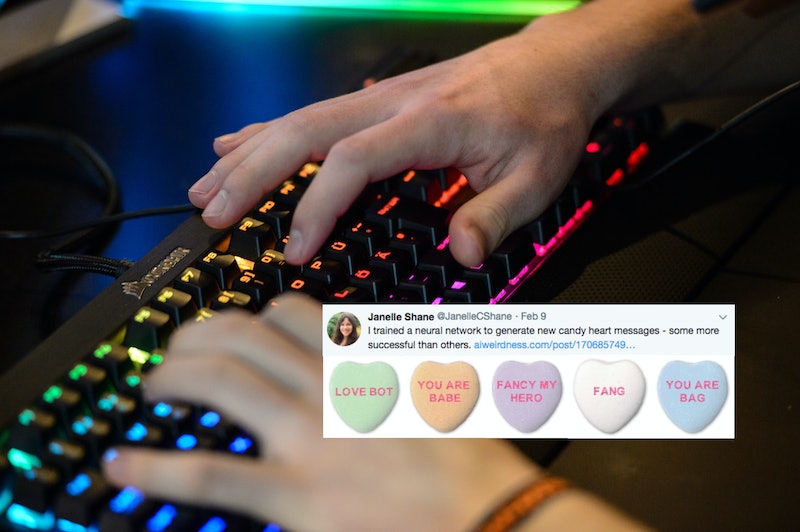 When I was little, no Valentine’s Day was complete without a red box of those candy hearts. You know, the ones that usually say “I <3 U” or “Be Mine” in red ink on a pastel sugar background? Everyone ignores the fact that the hearts actually taste kind of gross, but one woman has found a way to make the candy heart experience a million times better. Research scientist Janelle Shane, who runs the blog AI Weirdness, trained a neural network to generate candy heart messages and the results are nothing short of breathtaking. After inputting a few hundred unique candy heart phrases into a data set, the computer came up with wholly unique phrases, such as “My My,” “You A love,” and “Fang.” Cue infinite amusement.

Shane tells Bustle that she wanted to see how “weird” she could get the generally “tame” candy heart messages to be by training a neural network — a computer system that works kind of like the human brain — to spit out new ones, based on the patterns it saw in the originals. Because there were only a few hundred actual candy heart phrases to use as inspiration, Shane had to tinker with the program quite a bit before she let it do its AI thing. (For context, you usually need a few hundred thousand examples to train a neural network to imitate the prior examples and generate new ones, rather than simply repeat back the original examples.) “I really wanted the neural network candy hearts” for Valentine’s Day, she says.

Some of the results the neural network created were actually kind of good — not far off from what you might actually see on a candy heart IRL. “Love Bot” was one kind of on the nose example, and the AI also generated “My Bear.” But others toed the line between slightly off and completely surreal. “Cool Cud,” “Am Good,” and “Me My <3” formed the middle tier of good to weird phrases, and “Time Hug,” “U Hack,” and “Love 2000 Hogsyea” scraped the bottom of the barrel. You can check out a more complete (and amazing) list at AI Weirdness.

Shane also trained a neural network to come up with its own pickup lines, also for a Valentine’s Day-themed experiment. “It actually made some very good pick up lines that were good in a way that you wouldn’t really expect,” Shane says. “I have to give you a book because you're the only thing in your eyes” was one of her favorites, as was "You look like a thing and I love you.” (Side note: 1000 points for any of you who try one of these this weekend.) “It's great because the original lines that I gave it, most of [them] were like, horrible or aggressive or had some innuendo, or they had these puns that were just awful,” Shane explains. “The neural network picked up on none of that,” to the delight of people on the internet who love when robots try to approximate human feeling.

Now that they’re out in the world, these bizarre candy hearts have so far resonated with people on the internet, with one tweet explaining the experiment racking up a couple thousand likes over the course of two days. Shane explains that “if the lead time weren’t so long,” she’d love to custom print a bag of her AI-inspired candy hearts — or even get them into stores. “It would be fun some of the more innocuous ones next year — they introduce new candy hearts each year, so, maybe we will see ‘Team Bear.’ I'm waiting for the call.” But as far as her favorites go, they skew just slightly outside what you’d probably get at the drug store.

“I would love to get a bag of candy hearts that say ‘All Hover’ on them. That one or the one that just says ‘Hole’,” she says. Here’s hoping we’ll see these bags on sale after some future Valentine’s Day, once our AI overlords take over.