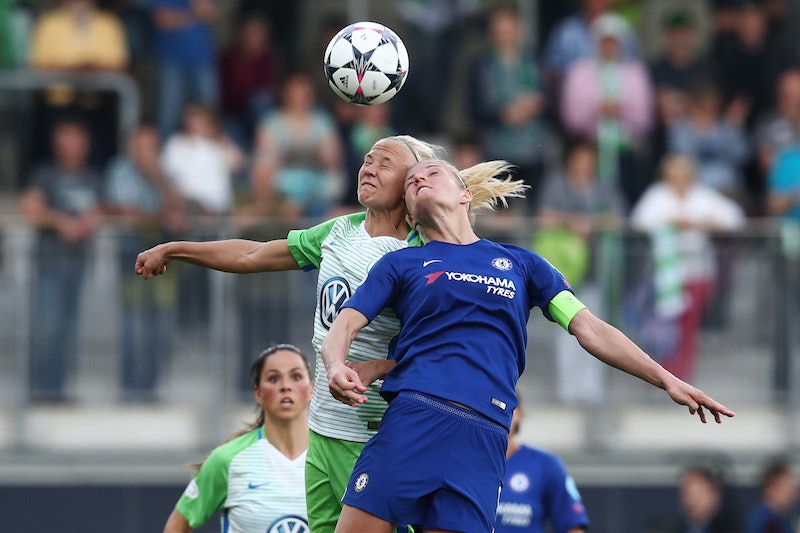 In medicine, it's well-known that different sexes may have different symptoms or side effects from the same illness or injury. Heart attacks, for example, present very differently in people who are female than in people who are male, and awareness around how the symptoms vary depending on your sex can truly help save lives. But even fewer people know that these same dynamics apply to symptoms of concussion, too.

Concussions are complex things. Also called a traumatic brain injury, or TBI, they can be caused by a blow to the head or being shaken strongly, and the range of symptoms people show when they have one is highly varied. Part of the issue of understanding how concussions affect people of different sexes differently has to do with the fact that, for a long time, only men were used as subjects in studies about concussions, as with a lot of other medical conditions (see heart attacks above). "We classically have always known the male response to brain injury," Mark Burns, a professor at Georgetown University, told NPR in 2017, but studies on women's brain injuries are more rare.

A study in 2014, for example, found that when men and women have concussions, men appear to take longer to recover. Women tended to recover in an average of 26.3 days, while men took 66.9 days on average to show a complete reduction in symptoms — and it didn't matter how intense the concussion was in the first place. But another study found that, in female athletes, the story is slightly different: according to data for elite athletes across soccer, ice hockey, basketball, softball, baseball, and lacrosse, women were 1.4 times more likely to receive concussions than men. And another study of athletes found that 34 percent of male athletes were discharged from a brain injury clinic within two months, while only 12 percent of female athletes were.

There are a few possible explanations for why female athletes in particular sustain concussions that are apparently more severe and difficult than male athletes. Scientists Tatyana Mollayeva, Graziella El-Khechen-Richandi and Angela Colantonio, writing in Future Medicine in 2018, explain that female athletes' concussions were thought to be worse because of "disparities in the neck musculature and head/neck stability in girls/women making them more susceptible to injury [...] lower biomechanical thresholds, increasing concussion susceptibility especially in female athletes, [and] hormonal factors such as circulating estrogens." In layman's terms, this means that the necks of people who are male and those of people who are female are constructed differently, and that estrogen might play a role in how we experience pain and recovery.

A study in 2013 found that where you are in your menstrual cycle might influence how you recover from a concussion. If you're concussed in the high-progesterone phase of your menstrual cycle, just before your period, you'll feel much worse as you recover than if you were hit at any other stage of your cycle. Estrogen and progesterone appear to have a role to play in prolonging brain injury symptoms in women as they fluctuate.

But it's not all clear-cut. Another thing researchers are considering is gender roles. As neuroscientist Melissa McCradden noted in Scientific American in 2017, "given what we are still learning about long-term contact sport participation and repeated concussions, maybe it isn’t that female athletes are taking longer [to recover] — it’s that male athletes aren’t taking long enough." She points out that a lot of concussion symptoms are evaluated by "self-reporting" — what the person themselves tells the doctor — and that men, male athletes in particular, may be minimizing their symptoms in order to look "strong" and get back into the field.

It's virtually impossible to look at somebody's brain after a concussion and declare them "recovered," so a lot of concussion research has to go on how people with the condition report their symptoms. And in a society where men are conditioned not to show pain or emotional "weakness", that might be muddying the waters when it comes to determining true gender differences in brain injury.