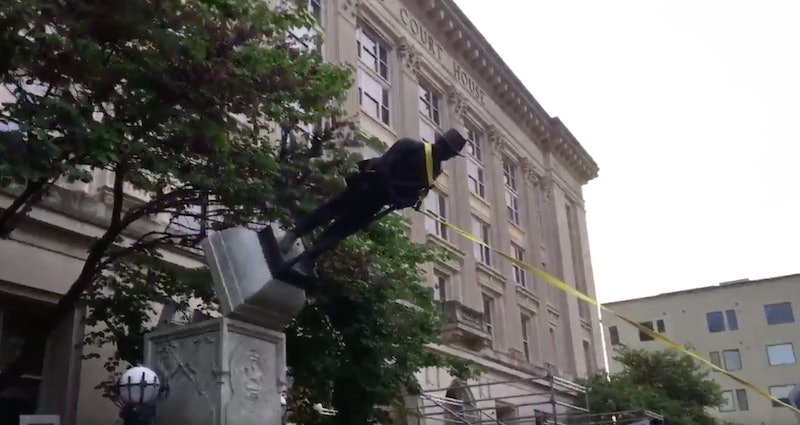 After marching the streets of Durham in opposition to white supremacy, a group of protesters tore down a confederate statue in North Carolina on Monday evening. Footage of the incident shows demonstrators looping a rope around the head of the bronze statue and tugging on it until the concrete support breaks, sending the monument plummeting onto the lawn below and breaking the statue's "legs."

The monument in question featured a statue of an unnamed, uniformed Confederate soldier standing atop a granite support base, which sports the Confederate seal and the words "IN MEMORY OF THE BOYS WHO WORE THE GRAY," a reference to Confederate uniforms during the American Civil War. According to the University of North Carolina, Durham residents erected it in 1924 — decades after the Civil War ended.

A large crowd had gathered in front of the monument to witness its destruction. Moments before it came down, demonstrators chanted "No KKK, no fascist USA!" After it hit the ground, the crowd was exuberant, with some members stepping forward to kick the fallen statue and others simply jumping up and down in joy.

Earlier in the day, local organizer Laon Tran told CBS that the Durham statue "needs to be removed."

"When I see a Confederate statue in downtown Durham, or really anywhere, it fills me with a lot of rage and frustration,” Tran said.

There have been many efforts, in North Carolina and elsewhere, to remove or destroy Confederate statues. In an email to WNCN, however, a spokeswoman for Durham County said North Carolina state law makes this difficult to impossible.

“Due to a North Carolina state law passed a few years ago, Durham County is prohibited from removing or making substantive alteration to historical monuments and memorials," Dawn Dudly told WNCN. "I share this to say that there is a statute in place making the efforts [to remove Confederate statues] difficult to move forward. I would assume that the only thing possible are steps to reverse the law.”

The toppling of the statue took place just days after a gathering of white supremacists convened in Charlottesville, Virginia to protest the removal of a Confederate monument. Unlike the Charlottesville rally, however, which became violent and ultimately resulted in the killing of one person, the removal of the statue in Durham appears to have transpired without any clashes between attendees or injuries, other than those incurred by the statue itself. WNCN reported that, for reasons that are "not clear," there was no law enforcement present during the protest.