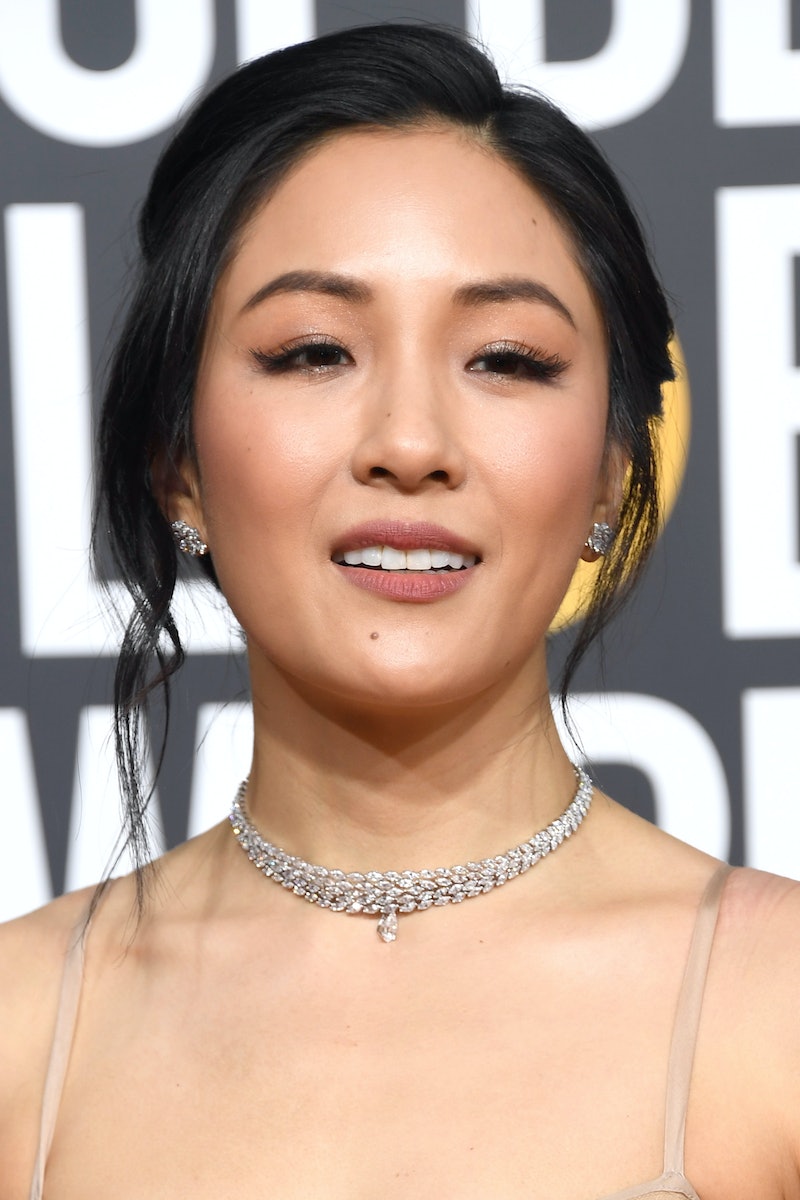 Fashion lovers, get ready to pick your jaw up off the floor again and again. When you see Constance Wu's Golden Globe dress, you'll be shook to the core in the absolute best way. And it's a reaction only fitting for a badass actor breaking boundaries this awards season. No, you certainly aren't ready for this lingerie-inspired certified lewk.

The Crazy Rich Asians star caught all eyes on the Golden Globes red carpet in a peachy-tan gown with a structured, sheer bodice and floor-length tulle skirt designed by Vera Wang. The top was gorgeously daring for the star, resembling a lingerie-like corset. At her waist, Wu tied a delicate bow of orange velvet. It was an unexpected touch and color, but one that took the outfit to a whole different level of breathtaking.

Wu looked totally glam, unapologetically sexy, and like the absolute showstopper she is. Just take a look for yourself.

To accessorize her incredible look, Wu wore a chunky diamond choker and delicate diamond earrings in silver, which are by Messika. The gratuitous amounts of bling, which didn't overwhelm her gorgeous gown one bit, only makes sense for the big night. Her nominated movie is called Crazy Rich Asians, after all.

The stunning actor wore her hair pulled back into an elegant updo, with soft tendrils framing her face. Speaking of her face, Wu went with a minimal makeup look for the night. A nude lip and stunning, full lashes were the only noticeable features of her beauty beat. The choice let Wu's gown speak for itself. And, frankly, that dress is saying a real loud, "damnnnnn."

More impressive than her Golden Globes look is the work that landed Wu at the awards show this year. Wu, who is also the star of ABC's Fresh Off The Boat, made history this year with Crazy Rich Asians, which was the highest grossing romantic comedy in the last decade and also stars a predominately Asian cast.

Wu starred in the book-to-film adaptation of Crazy Rich Asians as Rachel Chu, a university professor who unknowingly falls in love with a super rich man whose family is a pillar of Singapore's high society social scene. It's basically a touching and hilarious film about love, staying true to who you are, and some serious family drama — with lots of money thrown in for good measure.

Crazy Rich Asians is nominated for Best Motion Picture for a Musical or Comedy, while Wu is nominated for Best Actress in a Musical or Comedy for her role in the blockbuster hit. This nomination marks her first ever Golden Globe nomination, and the first time in 44 years that an Asian woman has been named in the category. Now, that's something to celebrate.

With Wu and Crazy Rich Asians up for some of the biggest awards of the night, its no wonder she went all out for her Golden Globes look. Consider yourself lucky to have a front row seat to her impeccable style and incredible talent.