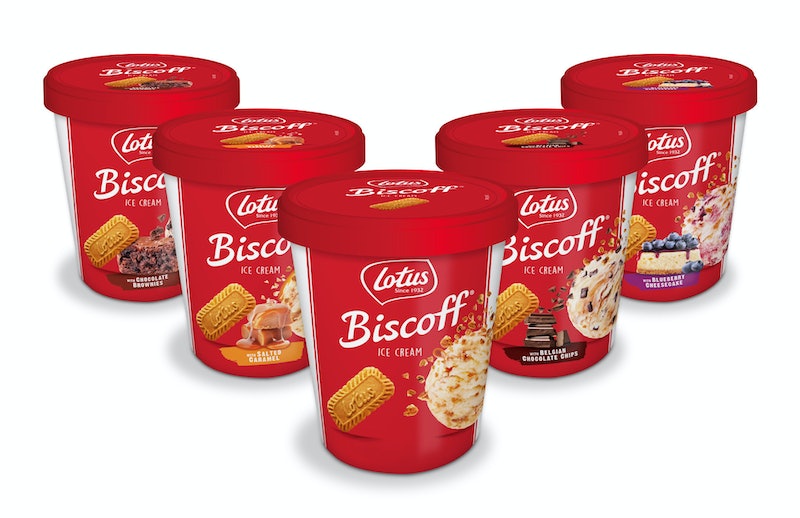 Big news for cookie butter lovers: Cookie butter ice cream made by Lotus Bakeries, creators of Biscoff — arguably the most recognizable brand of speculoos cookies in the world — is finally coming the United States. According to a press release, both ice cream bars and straight-up pints featuring Biscoff cookies and swirls of the beloved dessert spread will be arriving on shelves in just a few months. Said Lotus Bakeries U.S. General Manager Michelle Singer in the press release, “Biscoff is exploding in the U.S. and we can’t be more excited to bring the beloved Biscoff taste to ice cream."

Lotus's Biscoff ice cream has been available in Europe for some time; according to Cosmopolitan UK, it was first offered in the Netherlands in 2017, while as Metro notes, the ice cream bar version of it arrived in the UK earlier this year. The U.S. release will occur in two phases: The pints will become available in July 2019, while the ice cream bars will join the lineup in October. To begin with, you’ll be able to find them at Safeway and Albertsons stores in Northern California, Oregon, Idaho, and Arizona, although the press release states that “many more chains” will be “coming soon.”

At its initial release, the ice cream bar will only available in one variety; a layered affair, it will consist of original cookie butter ice cream at its center, then a coating of actual cookie butter, and finally a Belgian chocolate shell. The pints, however, will come in not one, not two, but five flavors, each with a variety of mix-ins. Original is the flagship flavor, of course; also on the menu, though, are Chocolate Brownie, Salted Caramel, Belgian Chocolate Chip, and Blueberry Cheesecake.

Cookie butter’s main ingredient — the variety of cookie known in Belgium as speculoos — dates back a long way, although it’s not entirely clear exactly how long. As the culinary website 196 Flavors points out, there are a number of different origin stories for the treat. According to one, speculoos cookies hail from Belgium, where pastry chef Antonie Deplée created them in 1870; however, according to another, ancient Romans already had knowledge of the spices used to flavor speculoos, which they brought to the region during the period when the Netherlands were under Roman rule. What’s more, although the cookies are consumed year ‘round now, they were long associated with the winter holidays — specifically St. Nicholas’ Day and New Year’s Day — in Belgium, the Netherlands, and the surrounding area.

The Biscoff brand, however, is a bit newer. Lotus Bakeries trace their history to 1932, when brothers Jan, Emiel, and Henri Boone opened up their first bakery in Lembeke, Belgium. In the 1950s, the bakery introduced the idea of munching on the now enormously popular cookie alongside a cup of coffee — and when Lotus brought their version of speculoos to the United States in the 1980s (as an in-flight snack on Delta Airlines, interestingly), it was under the name Lotus Biscoff: “Biscuit” plus “coffee” equals “Biscoff.”

Cookie butter itself is the most recent invention of all: In 2007, two separate contestants on the Belgian reality TV show De Bedenkers, or The Inventors, each submitted a product idea for a spread made out of speculoos cookies. Els Schepper’s recipe made it to the semi-finals, but although she didn’t win, she did end up getting approached by Lotus, with Biscoff Spread being the result. The spread began being marketed in Europe in 2009 and the United States in 2011, according to Bon Appetit, where it gained steam over the following few years. Now, a wide variety of cookie butters from a number of different brands are currently available, including not just Lotus’ version, but also Trader Joe’s; even Walmart has a version marketed under its Great Value brand.

And now, we can enjoy speculoos and cookie butter even during the hottest of seasons. Look for it starting in July — but if you can’t wait that long, you can always make some no-churn, four-ingredient cookie butter ice cream according to the recipe Biscoff currently has on it website in the meantime. Happy munching!

More like this
Deliveroo Is Selling Lotus Biscoff Cinnabons Now
By Darshita Goyal
TikTok's Butter Board Might Be The New Cheese Plate
By Emma Carey
On TikTok, Tinned Fish Date Night Is The Latest Viral Food Obsession
By Emma Carey
Behind The Hilarity Of The "POV: You Walk Into My Room" TikTok Trend
By Lexi Inks
Get Even More From Bustle — Sign Up For The Newsletter