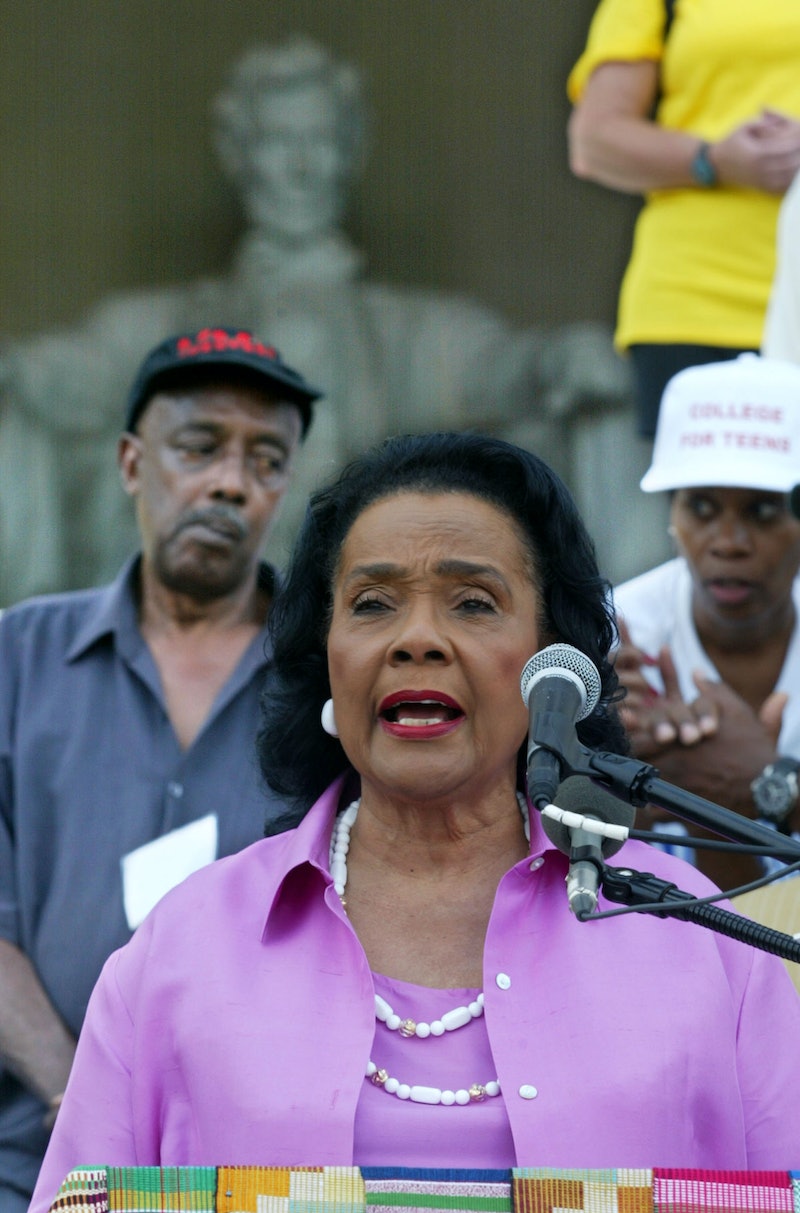 Twelve years ago today, Jan. 30, 2006, you passed into eternity. The world wept at losing you, the wife of civil rights leader, Martin Luther King, Jr. You were the mother of four children, and the woman named “First Lady of the Civil Rights Movement.” Yes, Coretta, you were a lady of firsts. You left behind an unshakable legacy that we can all embrace and learn from.

How many people realize that you were a trailblazer of the Women’s Movement, anti-apartheid, and social justice for LGBT rights? Well, it’s true. You set the “woke” wheels in motion for women and girls, and spoke out against South’s Africa’s ugly system of race-hatred. And there’s more. The multi-hued stripes of the rainbow pride flag are partially sewn together by your hand in the shaping of LGBT equality.

Yes, Coretta, you were a lady of firsts. You left behind an unshakable legacy that we can all embrace and learn from.

Nearly 50 years ago when your husband was assassinated, you wasted no time moving forward on these and many important causes.

Dear Coretta, your proactive attack on prejudice is the reason you are such an essential part of my book Martin Rising: Requiem for a King. In this collection of poems that document the days leading up to your beloved’s untimely death, we witness what it means to be a proud, unshakable foundation upon which the cause for civil rights stood.

Martin Rising: Requiem for a King by Andrea Pinkney, $12.21, Amazon

Dear Coretta, when I wrote this book, I intentionally chose to start and end the book with your powerful presence. And my husband, Brian’s Pinkney, whose spiritually inspired paintings illuminate the poems, took great care in rendering your beauty. The story opens on Martin’s 39th birthday, Jan. 15, 1968, with you taking charge at home with your family, putting your heart and soul into the making of Martin’s last birthday cake.

Then, just a short time later, Martin Rising’s narrative takes us to the front door of Martin’s death. And there you are, Coretta, in your moment of unthinkable grief, ready to transcend darkness. Ready to move forward as the civil rights movement’s First Lady.

The Martin Rising poem entitled “Quiet Storm” shows us the essence of your power. It says:

Coretta carries herself with a black swan’s dignity. . .

On April 8, 1968, four days after Martin died, you led a peaceful march of the Memphis sanitation workers and their wives and families, gathered together in the name of equal pay and fair working conditions. The protest that your husband had come to Memphis to attend, was now in your hands— and at your feet — as 42,000 people followed your lead.

Government officials encouraged you to call off the march. They were afraid of violence. They feared for your safety. And how could a woman effectively be out front making justice happen?

But you showed them how— by doing what any strong woman would: head up, eyes straight, and not taking no for an answer.

Soon after, inspired by your leadership, Ethel Kennedy, wife of Senator Robert Kennedy, joined you to launch the Poor People’s Campaign, a movement to end poverty. This crusade had been one of Martin’s long-time dreams that he didn’t live long enough to carry out. But Coretta, you completed the plan with grace and grit.

Thanks to your persistence, we now celebrate Martin Luther King Day, the result of you finally succeeding in convincing President Ronald Regan to sign legislation on Nov. 2, 1983 that established your husband’s birthday as a national holiday.

This crusade had been one of Martin’s long-time dreams that he didn’t live long enough to carry out. But Coretta, you completed the plan with grace and grit.

And so, my book, an elegy to your husband, is also my praise-song to you.

Dear Coretta, today as we reflect on your passing, we can, like so many bold marchers, follow your example. We can turn your legacy into a celebration of all that you stood for. We can persist and insist for change. We can step into a new day, brought on by the dawn of your dreams. Dreams that never die.

You once said, “Women, if the soul of the nation is to be saved, I believe that you must become its soul.” Let us do that today and every day to honor your memory.