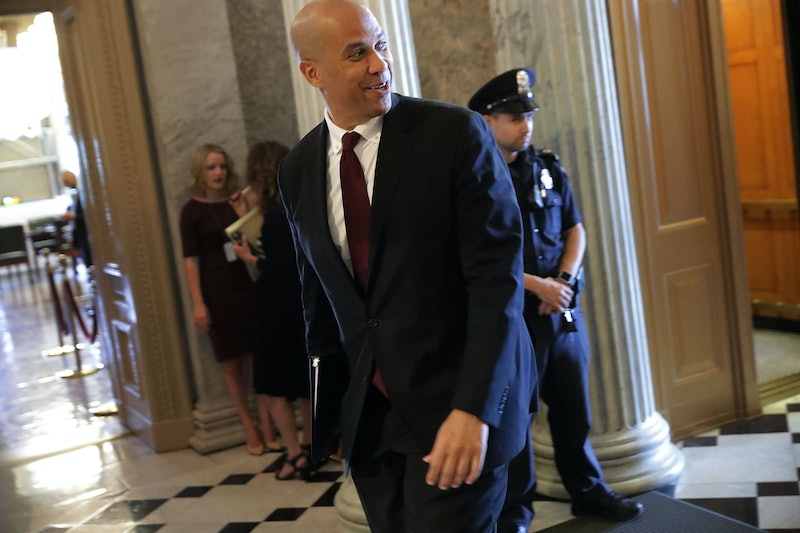 But Booker's bill goes a step further by also directly challenging states that haven't legalized weed and have racially disproportionate incarceration and arrest rates by withholding some criminal justice funding.

In a video posted to his Facebook page accompanying his announcement of the bill, the senator cited the policies surrounding the "War on Drugs" — and their disproportionate effect on communities of color and minorities — as something he wanted to counteract.

For decades, the failed War on Drugs has locked up millions of nonviolent drug offenders — especially for marijuana-related offenses — at an incredible cost of lost human potential, torn apart families and communities, and taxpayer dollars. The effects of the drug war have had a disproportionately devastating impact on Americans of color and the poor.

He added, that the individuals who were disproportionately likely to be locked up for these sorts of offenses are also from more vulnerable communities:

The bill would incentivize states that are looking to begin the process of legalizing marijuana in their states, while also penalizing those that have racially disproportionate drug-related prison populations.

The funds withheld, according to Booker's press release, would be put toward Community Reinvestment Fund that would "create a community reinvestment fund to reinvest in communities most impacted by the failed War on Drugs." The fund would sponsor job-training programs, public libraries, community centers, youth programs, health education and programs that assist formerly-incarcerated people in re-entering their communities.

On top of that, the legislation would expunge federal convictions for marijuana use and possession and would allow prisoners serving time for a marijuana offenses to have sentencing hearings. The bill also would open up options for individuals harmed by the disproportionate arrest and imprisonment rates to sue.

Booker, who had previously shied away from such far-reaching marijuana reform, now addresses this issue as one crucial to criminal justice reform. Per his press release:

Descheduling marijuana and applying that change retroactively to people currently serving time for marijuana offenses is a necessary step in correcting this unjust system. States have so far led the way in reforming our criminal justice system and it's about time the federal government catches up and begins to assert leadership.

Queen Adesuyi, Policy Associate at the Drug Policy Alliance, also noted that the bill is "the most ambitious marijuana bill we have seen in Congress" and commended Booker's explicit recognition of the war on drugs effect on people of color.

However, as President Donald Trump's current Attorney General Jeff Sessions is notably against drug policy reform movements like what Booker is proposing, the odds of seeing this sort of comprehensive, progressive legislation pass seem slim. Just the same, changing cultural attitudes toward marijuana in the United States — and the support of a mainstream Democrat who is regularly whispered about for the 2020 election — mean it's still one to watch.