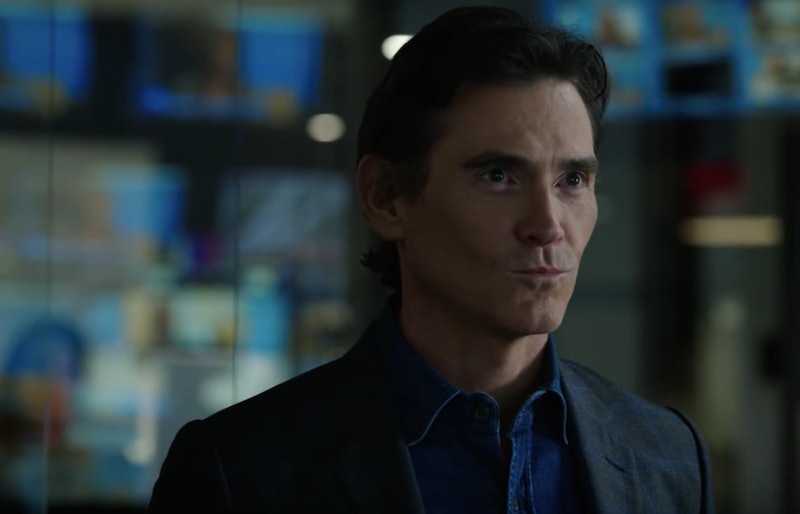 Spoilers ahead for Episodes 1-3 of The Morning Show Season 1. Cory Ellison, a network head with slimy charisma, is one of the most interesting parts of The Morning Show. The new Apple TV+ series is loosely based on Brian Stelter's 2013 book, Top of the Morning: Inside the Cutthroat World of Morning TV, but the cast has been pretty insistent that all of the characters are fictional — including Cory. Still, star Billy Crudup, who plays him, said he was drawn to the character exactly because he felt so familiar.

"[Cory] was a guy that I felt like I've seen a lot in New York.... Hyper-ambitious, really aggressive, and thinks that everybody is in the middle of the game that he is playing," he said during an interview on the Tonight Show with Jimmy Fallon. "And so he's kind of like a lion tamer, and this is the three-ring circus to him."

In the show, Cory is arrogant and bold. He never gets intimidated, and in fact seems emboldened by the anarchy that he creates. Even when — after Alex (Jennifer Aniston) goes rogue and announces Bradley (Reese Witherspoon) as her new co-anchor — Cory's boss chews him out, he gleefully exclaims, "Chaos — it's the new cocaine, Fred!" According to Crudup, this is, unfortunately, because Cory tends to always be right.

"Since Cory has nothing but evidence that his version of [economic] growth works, then there's no reason he shouldn't be as confident and cocky and capable of his own aptitude — which he is," the actor told BUILD Series.

There's not much known about Cory's past, aside from what little he tells Bradley during their meeting in Episode 2: "What is my story? Smart kid, dad left, I took care of my mom, I vowed to own the world one day and kick everyone's ass into submission."

His first agenda for UBA is to push the family narrative; his second is to force Alex (Jennifer Aniston) out. "Watching a beloved woman's breakdown is timeless, American entertainment," he says at one point, referring to Alex struggling in the aftermath of her co-host Mitch Kessler's (Steve Carell) firing.

Even more disturbing is that Cory professes to be progressive and politically correct. "We're creating a safe space here. It's a feminine space," he tells his staff in the wake of the network's #MeToo scandal. "This is an era for The Morning Show where women make the rules and give voice to the silenced." And then, tellingly: "Speaking of which, nobody says a f*cking word to the press."

No one is exactly "good" on The Morning Show, but in this story, it's clear that Cory is the villain, swooping in with platitudes about cleaning up the Exxon oil spill with soap and then going home with a clear conscience. And if he gets his way, Alex's days at UBA are numbered.

More like this
You Can “Fall In Love” At The Resort Where Bachelor In Paradise Season 8 Was Filmed
By Brad Witter
Who’s The Richest 'Grey’s Anatomy' Star? See The Net Worth Of Each Cast Member
By Hugh McIntyre
Dan Levy Appears In The Latest Teaser For The Weeknd's HBO Series, 'The Idol'
By Jake Viswanath
The Best 'Grey's Anatomy' Intern Moments, From MAGIC to Glasses
By Grace Wehniainen
Get Even More From Bustle — Sign Up For The Newsletter