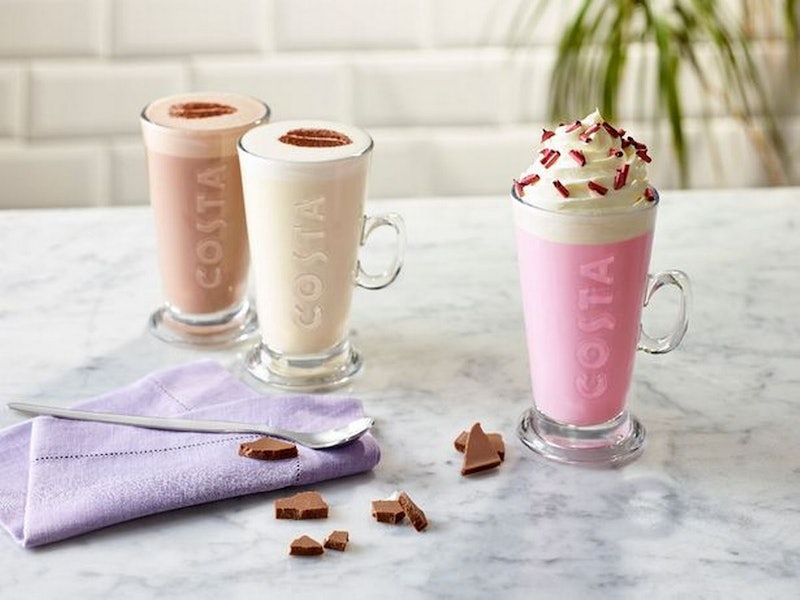 Although it's sad to see all of the Christmas special menus finish up, TBH I'm sure I'm not the only one who's fed up of Christmas-flavoured things. However, seasonal menus are not only de rigueur but also an all year round thing. And Costa's new pink hot chocolate is here just in time to celebrate the New Year.

Priced from £3.35, you can get it with lashings of whipped cream on top and even go OTT decadent with sprinkles as well. I mean, why not? You're drinking a pink hot chocolate after all.

The beverage is a perfect millennial pink. So how did they make it so cute? Well according to the Metro, it gets its rosy hue from ruby cocoa. Ruby cocoa was discovered by the world's biggest cocoa developer Barry Callebaut and hit supermarket shelves back in 2017. According to the Guardian it was the first new natural chocolate colour since food giant Nestlé released white chocolate over 80 years ago.

The hot drink is coming into stores alongside a slew of new and exciting Costa products, including lots of vegan offerings.

The Manchester Evening News reports that the coffee giant are adding both coconut coffees and hot chocolates to their menus. In terms of plant-based food, they've got meat-free smoky ham and cheeZe toasties, all-day vegan breakfast paninis, a vegan chilli bean & rice Pot, and strawberry croissants.

With all those choices, those who are flirting with the idea of veganism this Veganuary should head to Costa.