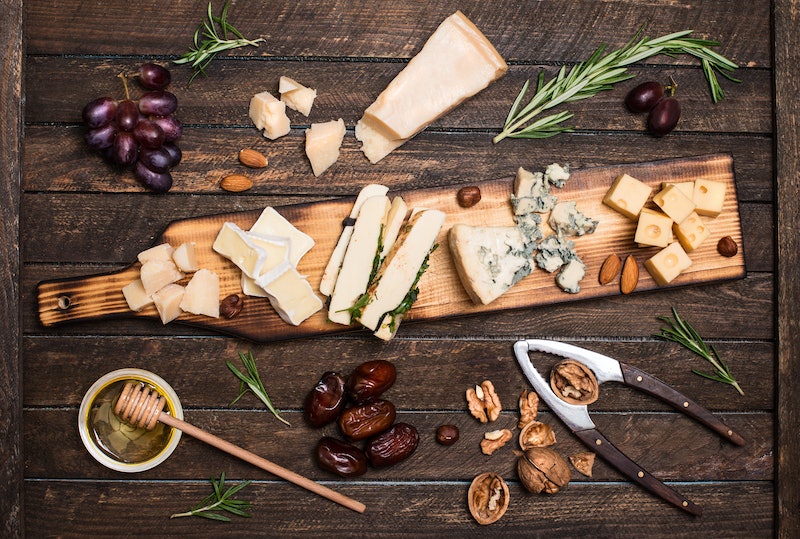 Friends and dairy fiends, I come to you bearing good cheese news: just in time for the holiday season, Costco’s $20 cheese flights are coming back. I’ll say it again, slowly. Costco. Cheese flights. 20 American dollars. Whatever your holiday plans were before, they will now be including this cheese board.

The Costco cheese flight includes five different types of cheeses. Let’s not waste any time meeting each one. First up there’s a Yellow Door Creamery’s Monteau Alpine. It’s made with cow's milk and is a firm cheese with nutty notes. Next, we’ve got a Cabot Clothbound Mature Bandage Cheddar from Jasper Hill Farm. It’s savory. It’s tangy. It’s got a natural rind which inherently makes it seem fancy. There’s El Pastor’s Spanish Red Wine Soaked Goat cheese, the fruity and sweet one of the bunch. There’s also a Pecorino Toscana from Busti Il Tartufo. She’s savory, dense, and — oh la la — Italian. Finally, there’s a Tuscan Hand-Rubbed Fontina from Yellow Door Creamery. I know you’re focused on the phrase “hand-rubbed,” but I promise, the semi-soft cheese coated in a blend of Italian herbs is so good, you’ll be able to look past those words.

If you’re looking for the perfect treat to bring to your next holiday party, Costco has you covered for just $19.99.

Costco’s cheese flight initially created lactose shockwaves through the internet’s digestive system when it was initially discovered earlier this summer. It was nearly identical to this new cheese flight, but instead of the Tuscan Hand-Rubbed Fontina, it included a Dijon herb hand-rubbed Fontina. While the Dijon-encrusted Fontina doesn’t appear to still be available at Costco, it is listed on Yellow Door Creamery’s website and available for wholesale. So, if you want to go buck wild with your cheese board, you could start there.

Like the flight earlier this summer, Costco’s new cheese flight has nearly two pounds of cheese total in the package (29 ounces, to be precise). If you abide by the “1 to 2 ounces of cheese per person” rule, that’s about enough to serve a party of 15-25 people. If you abide by the “cheese is the appetizer, entree, and dessert” rule, you’ll maybe be able to split the cheese flight four ways.

If you’re wondering whether $20 is a good deal on cheese, I’ll provide you this context: you can get a little more than a comparable amount of brie on Amazon (2.2 lbs)...but it will cost you 3.5 times more than Costco’s cheese flight. In other words, yes, $20 for five different types of cheese weighing in at nearly 30 ounces is a pretty good deal.

While the cheese flight doesn’t come with crackers or fruit to pair it with, Costco has you more than covered on that front. Put them on a cheese board with Mary’s Gone Crackers or a one-pound bag of pita chips. Get a Costco-size container of grapes and be the hero of your family’s Thanksgiving. There is no wrong way to cheese board.

The back of the package even lists suggestions for wine and beer pairings if you really want to impress your extended family at Christmas. If you need more suggestions, the list of wine and cheese that pair well together is about as infinite as the internet itself. Also, cheese board Instagram influencers — as in people whose entire Instagram is dedicated to professional-level cheese boards — is a thing! You will not be lack for inspiration or dairy products. Happy cheesing!