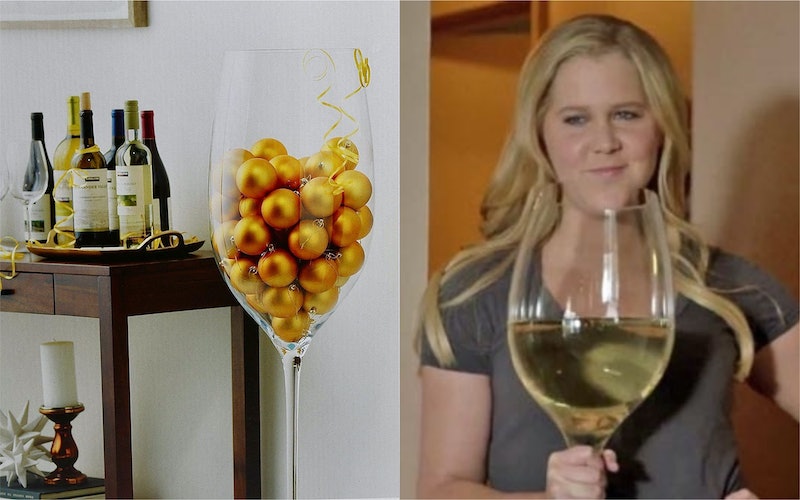 It’s not clear exactly when the giant glass actually arrived at the bulk retailer, but for whatever it’s worth, the oldest tweet I’ve been able to find featuring it dates back to November of 2017. “Costco has a 4ft tall wine glass. I think I need 3,” tweeted @hayley_infante on Nov. 5, 2017. A follow-up tweet from about 12 hours later added, “Update: It holds 25 bottles of wine.” It ended up being quite a hit that holiday season.

Since roughly August, though, photos of the booze receptacle taken inside Costco warehouses have been circulating at a slightly higher rate — and, to be fair, it’s not hard to see why. The sight of a four-foot-tall wine glass is absurd, and the internet loves its absurdity.

And hey, guess what? Several posts on Twitter and Instagram are less than a month old, suggesting that the item might still be available for purchase.

Alas, the four-foot-tall wine glass does not appear to be available for purchase on Costco’s website anymore; as of this writing, going to the URL formerly associated with the item sadly just brings you to a “Product Not Found” page. This isn’t altogether surprising; individual Costco warehouses often have things in stock that they might not carry online and vice versa. As such, I assume that many of the images currently making the rounds on social media were snapped inside very specific Costco locations.

Back in January of 2018, though, the gargantuan drink vessel was purchasable from Costco online. (Thank you, Wayback Machine, for your endlessly useful archives.) According to the old listing, the four-foot-tall item is blown glass handmade in Poland; it’s meant to be a “wow statement piece at any party event, bar setting, or any room in your home.” The listing instructs us to “just add decor to the inside of the glass.” At the time, it was $79.99 — and, in all likelihood, it probably still is $79.99. That’s how much it was at the end of August, at least (that is, when this short video was filmed).

For all the jokes everyone (including myself) is making along the lines of the glass being “for decorative purposes *wink wink nudge nudge,” though, it definitely isn’t advisable to drink wine from this monstrosity. If that tweet from November 2017 is correct — that is, if the glass does, in fact, hold 25 bottles of wine — drinking an entire “glass” of wine out of the thing would literally kill you. According to the alcohol education website run by New Zealand’s Health Promotion Agency, the lethal dose of alcohol for most humans is equivalent to about four bottles of wine. So, y’know, don’t accept or hand out any dares to drink a full four-foot-tall glass of wine; if you do, someone’s going to end up dead.

It does make a delightful planter, though.

If you don’t have a Costco nearby (or simply aren’t a member), you can get the glass on Amazon — but be warned that it’s only sold by third-party sellers, and at an enormous markup, at that. What will set you back around $80 at Costco is a whopping $354 from the seller Pacific Northwest Supplies.

Or you can just live vicariously through all the social media posts about it. That works, too.

Now if you’ll excuse me, I have to, uh, go… run some errands. At Costco. Immediately.

More like this
I Tried The $20 TikTok Viral Oishii Strawberries — Here's What I Thought
By Sophie Hanson
On TikTok, A ‘Snackle Box’ Is The Best Way To Pack Charcuterie On-The-Go
By Meguire Hennes
TikTok Is In Its Elle Woods Era
By Meguire Hennes
13 Selfie Instagram Caption Ideas That Exude Main Character Energy
By Jessica Booth and Emma Carey
Get Even More From Bustle — Sign Up For The Newsletter