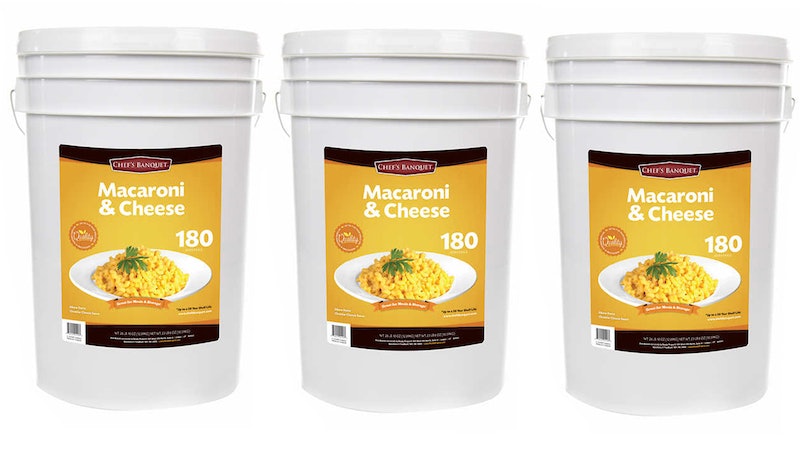 Friends, I come to you, breathless, bearing good pasta news: Costco has a tub of mac and cheese that weighs 27 pounds, costs $90, and lasts 20 years. I will give you a moment to process this information. It’s kind of a lot.

The Chef's Banquet Macaroni & Cheese Storage Bucket 180 Servings” (which is her full Christian name) is a six-gallon bucket filled with enough macaroni and cheese packets to last you the next two decades. For $90, you get six 30-serving Cheddar Sauce Mix packets and six 30-serving Elbow Macaroni Pasta pouches. Her name includes the words “180 Servings.” Did you think that was a lie?

The product is listed under “Emergency Kits & Supplies,” which is true and accurate. Mac and cheese is always an emergency. If time is of the essence, Costco’s typical delivery speed is five to seven days. Unfortunately, the tub o’ mac is currently on backorder. (She could only be the internet’s best-kept secret for so long.) New orders places are expected to ship between February 12 and 13, which means you’ll have to think of something else for your Valentine’s Day dinner. The mac and cheese tub is also being sold for $149.99 on Amazon. However, product availability also appears to be limited there as well. Such macaroni greatness requires patience.

If you were hoping to march to your nearest Costco and demand, “One big, big tub of mac and cheese that will last me until I am old, please,” you’re also out of luck. One brave soul at CNBC called their local Costco, asking if they had the product. “A 27-pound bucket of macaroni and cheese?” the employee said. “No.”

For optimal longevity (AKA if you really want this bucket to last 20 years), you should store your mac and cheese tub in a “dry, cool environment.” Think “basement” or “doomsday bunker.”

If the idea of a 20-year shelf life has your stomach turning, don’t stress out entirely. The “preservatives used in food are approved by the regulatory agencies,” Joseph G. Sebranek, an Iowa State University professor who researches food safety, told CNBC. Basically, this product is like Velveeta’s shells and cheese jam-packed with apocalypse-level preservatives. How else did you think we were going to beat the zombies? With quinoa?

The one warning I must give, if you choose to look at this product online, is you will be sucked into an internet vortex of other emergency-level foods Costco sells. I’m talking 40-pound tubs of honey, a bunch of freeze-dried beef stroganoff, something called Mountain House Lasagna. It is the most extreme version of meal prepping.

The reviews on the mac and cheese tub are overwhelmingly positive. There are only three. Let us dissect each one.

The first, a five-star review, says: “We bought this for our grandson. He was here the day it arrived. We opened it and made it. Very pleasantly surprised. I have made it a couple of different ways. You can't mess it up. Have purchased it again, and will continue to use it.”

This review leaves me with more questions than answers: was this for a specific occasion? When you say "opened it," was the tub wrapped or did he...open up the tub of mac and cheese? Regardless, we've learned something important here: A tub! Of mac and cheese! Can be! A gift!!!!!

Another review, the lone four-star in a sea of fives (a “sea” can just be two, okay?), reads: “I bought this item to make Mac and cheese whether I am at camp or home.” She's multifunctional! She's good in various locations! She likes to camp!

The final review, another five-star, takes us on a flavor journey: “I was surprised. Honestly, I was expecting something that tasted horrible. I was surprised to find out that it was very good.” The journey is short, more like a straight line, but we do arrive at a conclusion: this mac and cheese tastes good!

If you cannot imagine a scenario in which you need a bucket, nay, A TUB of macaroni and cheese that weighs as much as a toddler and would last for two entire decades, allow me to provide some examples.

There is, of course, the obvious: you’re ordering food for a school cafeteria, a summer camp, the Duggar children, etc. But there are so, so many other reasons to buy this monstrosity of a food product: