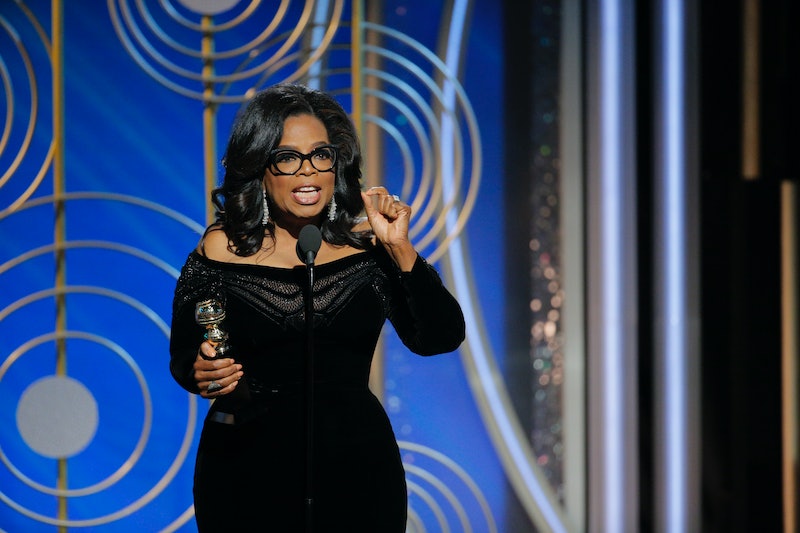 Donald Trump's presidency is only a year old, but that doesn't mean that it's too early for his potential opponents to start preparing their runs against him. There are already all sorts of familiar names in the ring, at least according to the media — Biden, Warren, Booker, Harris — and now, after the Golden Globes, there's another: Winfrey. But could Oprah beat Trump in 2020? It may sound outlandish when you first hear the question, but given everything else that's happened over the last couple of years, it's also definitely not out of the question.

After Seth Meyers made a joke during his Golden Globes monologue forbidding Oprah from running for president (in the hopes she'd do the opposite), rumors about a potential candidacy began to form, and Oprah's partner helped fan the flames.

"It's up to the people," Oprah's longtime partner Stedman Graham told the Los Angeles Times. "She would absolutely do it."

Remember that Donald Trump's run for president seemed ridiculous at first to both Democrats and Republicans, especially because he had flirted with the idea so many times and then based his entire political persona on the false claim that Barack Obama was not born in the U.S. His first campaign speech, which gave the world that memorable line about Mexican immigrants in the U.S., riled up his opponents and fired up his allies. A movement had begun, for better or for worse.

Now, consider Oprah's Golden Globes speech and entertain the possibility that it could be the beginning of a presidential run. If Democrats are looking for a way to fire up their base, Oprah just might be it.

Oprah's speech was a response to the #MeToo movement, and some of its most powerful lines focused on women's empowerment and change in a culture that has grown up based on years and years of sexual harassment and abuse.

So I want all the girls watching here and now to know that a new day is on the horizon! And when that new day finally dawns, it will be because of a lot of magnificent women, many of whom are right here in this room tonight, and some pretty phenomenal men, are fighting hard to make sure that they become the leaders who take us to the time when nobody ever has to say "me too" again.

All in all, it was pretty inspiring stuff. She hit all of the high points, cemented herself as an intersectional feminist, and had everyone on their feet. One speech does not a presidential candidacy make, of course — but there's reason to believe that Oprah could gain even more supporters than Trump did, if she did decide to run in 2020.

She's the third richest self-made woman in America, with a net worth over $3 billion. Trump is currently worth the exact same amount as Oprah, but he's far from self-made. Oprah's mother was a housecleaner, and she built herself up in media and the entertainment industry to her current levels of fame and fortune; meanwhile, Trump essentially just joined his wealthy father's successful real estate empire and then continued to rely on his father financially over the years in many ways.

Oprah's also famously generous, a trait that Trump doesn't share. She's donated to numerous charitable causes and dedicated a significant portion of her career to bettering the country and the lives of people in it. She's always been dedicated to the black community, at least partly with the aim of improving the lives of children born into situations similar to how she grew up. She would certainly have a better chance of rallying a more Obama-like coalition, something Hillary Clinton was not able to do (and which could have cost her the election).

In short, her life experience would allow her to speak truthfully and genuinely to millions more people than Trump can.

If she did actually decide to mount a run for president, Oprah would have to answer a lot of questions about her stances on the issues America is facing. But hey, if a businessman and entertainer like Trump can do it and win the presidency, then that hardly seems like a barrier at all for a dedicated and accomplished woman like Oprah.