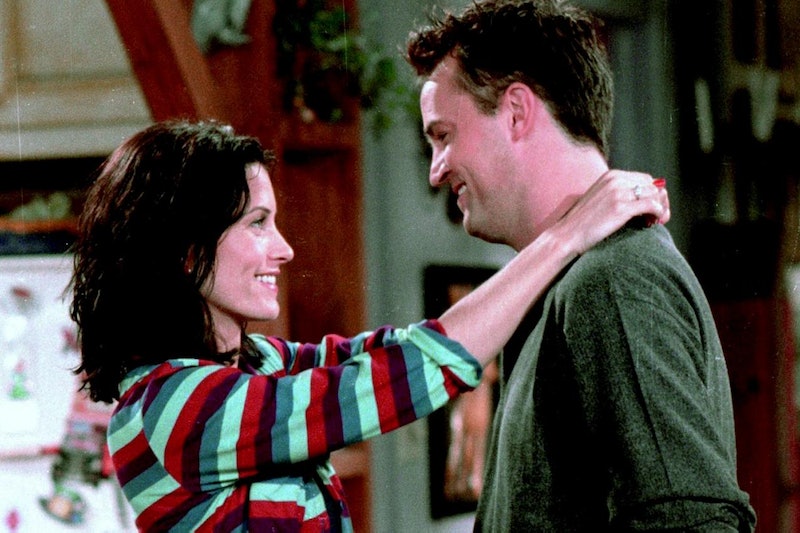 In terms of on-screen relationships, there are few that stay as emblazoned on your memory as Monica and Chandler. And, much to fans' delight, the fictional couple is now back in business. Well, kind of. Courteney Cox and Matthew Perry had lunch together and sorry, Kimmy K, but they just re-broke the internet.

Cox shared a photo of the two on her Instagram account and, of, the social media crowd went absolutely wild. The actor captioned the photo with an all-too-fitting gag:

"Guess who I had lunch with today....I KNOW!! Could I BE any happier? #realfriends"

Thing is though, this picture just doesn't feel like enough info on their day does it? I mean a picture says a thousand words but we need more. Where did they go? What did they eat? Most importantly: why in the were they meeting up? Maybe to talk about, well, a potential MOVIE?

Rumours re a potential reunion went into actual overdrive earlier this year when a photo of the original cast was shared on their Instagram accounts. And this second picture will obviously set tongues wagging once again.

OK, calm down calm down, the reunion is officially definitely not happening. Deadline reported that during a Friends 25th anniversary panel at Tribeca TV Festival in Lower Manhattan, the showrunner Marta Kauffman said:

OMG that hit like an arrow to the heart! But also hit the nail on the head because that's what was so great about the show. At the very same event, co-creator and executive producer David Crane added, "We did the show we wanted to do. We got it right, and we put a bow on it."

So although professional reunions might be out of the question, the growing number of selfies we are being served makes it look like BFF reunions may well become a regular thing. We stan.

More like this
Twitter Has Renamed Ekin-Su After *That* 'Dancing On Ice' Performance
By Sophie McEvoy
This Pre-'Love Island' Video Of Olivia & Zara Together Changes Everything
By Bustle UK
Twitter Can’t Make Up Its Mind About Ekin-Su’s 'Dancing On Ice' Skate-Off
By Sophie McEvoy
Vanessa Bauer Is Reportedly Dating Her 'Dancing On Ice' Partner
By Darshita Goyal
Get The Very Best Of Bustle/UK
Sign up for Bustle UK's twice-weekly newsletter, featuring the latest must-watch TV, moving personal stories, and expert advice on the hottest viral buys.