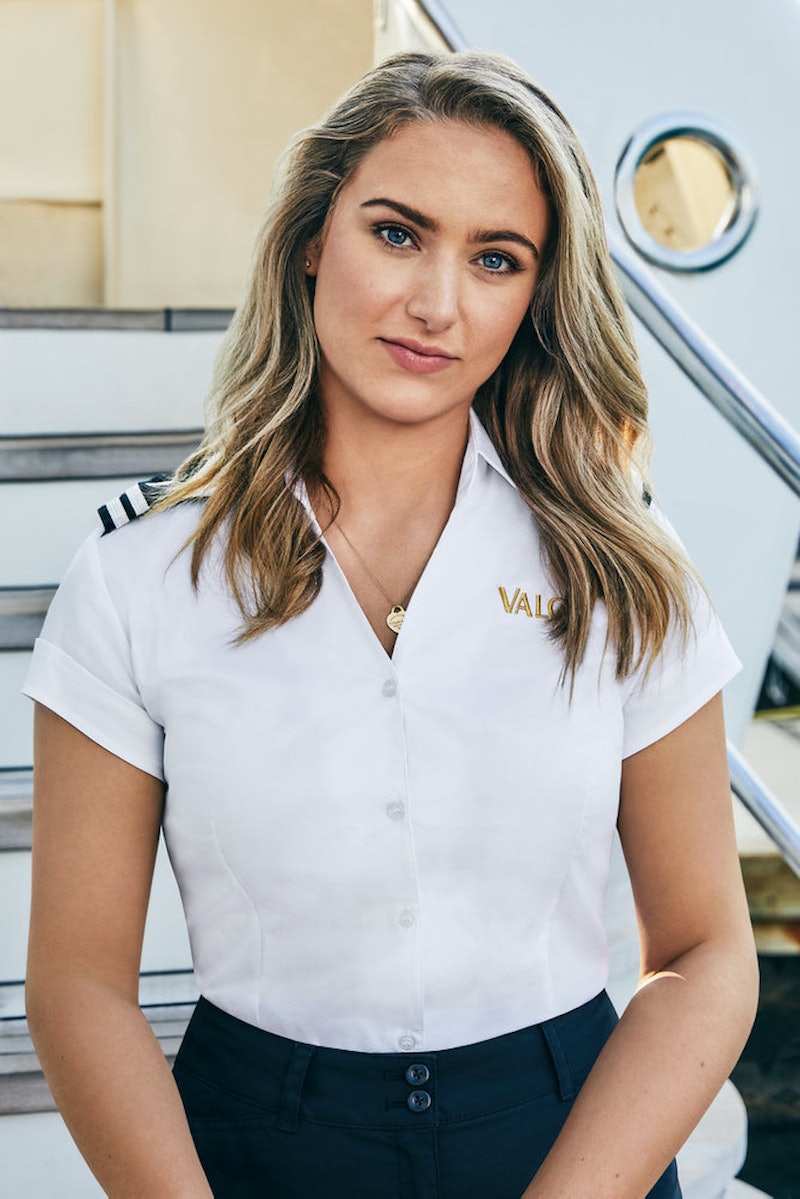 When Below Deck returned for Season 7, it only had three familiar cast members remaining. The other six Valor crew members were all brand new, and fans already have a lot of opinions about Courtney Skippon from Below Deck. The new Third Stew made a splash in the premiere by complaining about nearly every task she was assigned from serving to doing laundry. She kept saying she would be better as one of the vacationing patrons than an actual crew member on the boat. First of all, same. Second of all, did you not know what you signed up for, girl?

Before fans judge her too prematurely, though, Chief Stew Kate Chastain wants to say something. Kate was quick to jump to Courtney's defense in an interview with Decider, saying, "I think that her complaints are hilarious! She's very dry, it's her sense of humor." Kate added:

"She still doing the job, she's just very real. I think that people might think because she's so gorgeous and blonde that she's being high maintenance, but that's her sense of humor. Because guess what? It did feel like we were walking across a desert when you're on a hot sandy beach and I would not want a farmer's tan from a polo, all those things are true. I think she's very funny."

Courtney had her own response to upset fans on Instagram. "I've gotten 100 messages about what an entitled b*tch I am and I just wanna say: let a girl live. And you're clogging up my inbox where there could be compliments," she captioned a video of herself on the show.

In addition to finding her funny, Kate also found her to be a hard-worker, which is high praise given some of the issues she's had with other stews in the past. Is Kate says she's a hard worker, then she very likely is. Courtney was relatively new to the industry, but Kate said she was still "hardworking and respectful and had [a] good attitude ... which are the most important qualities ... Everything else can be taught and we had a full season to practice."

The "about" section of the Below Deck site says that Kate's alleged "favoritism to Courtney" ends up becoming a point of drama for fellow newbie Stew Simone. But all of the compliments Kate had for Courtney in the Decider interview she also had for Simone. After the season, at least, it seems any drama has been laid to rest.

It makes sense that Courtney — despite her complaints — ended up being well suited for the Valor and its Thailand charters. Her Bravo bio says that Courtney grew up in Canada on the water and has been traveling for most of her life. She went to business school in France and eventually turned that into a stew career on a charter with a friend. She's been following that career path ever since and has visited so many places as a result.

Her Instagram highlight reel is just a list of all the countries she's been to including Australia, The Bahamas, Italy, France, Switzerland, and more. Her bio says she's "Flâneusing," which is a play on the French word "Flâneur," which is a "stroller" or "lounger." Courtney is definitely not afraid to admit she likes a good break and vacation. She even captioned the above pic, "Take your leisure seriously."

Below Deck doesn't always bring the same cast members back season after season, but if Courtney is as dedicated of a worker as Kate makes her seem, she could be back on the Valor for Season 8 — unless she's off vacationing somewhere instead.