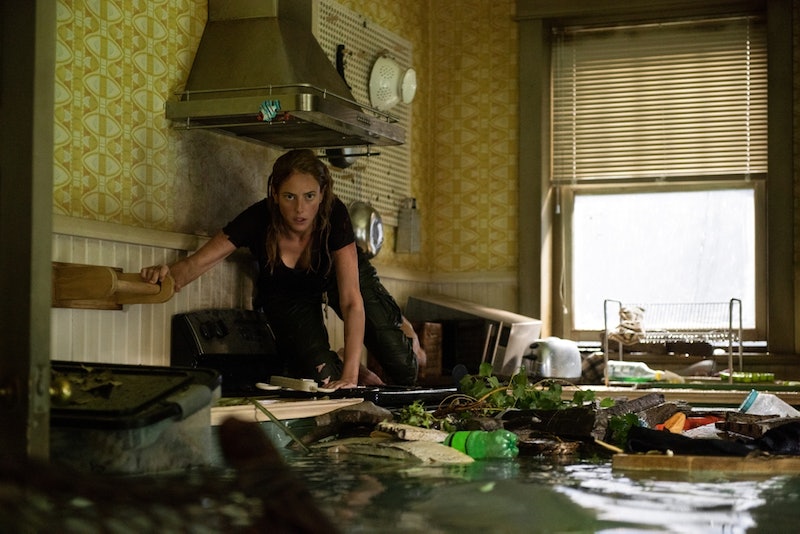 Horror finds its way to Florida in the movie Crawl, and it might make you rethink your next vacation to Siesta Key. The July 12 release is about an army of vicious alligators threatening the home of Haley (Kaya Scodelario) and her father Dave (Barry Pepper) during a Category 5 hurricane. Since this is Florida, Crawl sounds like it could be based on a true story, but don't worry, it's really not. Let the vacation commence.

While Category 5 hurricanes often threaten lives, you rarely hear about a person getting left behind in a house filled with alligators during one of these natural disasters. That's what happens in Crawl, when Haley stays behind despite evacuation orders to save her father. The most severe level of hurricanes are certainly scary enough to warrant a horror movie on their own, and you can definitely find examples of those, such as 2000's The Perfect Storm.

There's also the Sharknado series which, like Crawl, combines extreme weather with menacing predators. Crawl is arguably more realistic than Sharknado, though, especially considering that real-life accounts of alligators invading homes during hurricanes do exist — just not in the same way as the new horror film. Going off of news reports, usually we're talking one rogue gator found inside or near a home as the result flooding, rather than a hungry horde, as the movie depicts.

CNN reported that, in one recent instance, a homeowner in Texas found an alligator in his home following a flood caused by Hurricane Harvey in September 2017. "I walked through the house and was looking at demo-ing the house, when I turned around and walked back through my dining room. I looked down, and there was a 10-foot alligator in my dining room," Brian Foster said. Local wildlife control and law enforcement officers captured Foster's reptilian intruder, and, fortunately, nobody was attacked like you see in Crawl.

It's not unreasonable to worry about what happens to alligators during impending hurricanes, especially considering the many alligator wildlife parks in the state. A 2017 article published by HuffPost reported that Orlando's Gatorland theme park takes thorough precautions when preparing for a hurricane like Harvey. "We have double fences, a large perimeter fence that goes around the entire property," park director Mike Hileman told the site of the 110-acre theme park that contains over 2,000 alligators. You see where the idea for Crawl might have come from now, right?

Even though the threat of flooding and alligator attacks might exist in real life, Florida residents have already taken to Twitter to denounce Crawl's trailer for its inaccuracies — including the overly-foreboding tone it presents.

Twitter user @carlyxnichole replied to Crawl's official account saying, "Anyone who's ever lived in Florida and been through a cat 5 (Irma 2017) knows damn well this is already beyond unrealistic. Where's the hurricane parties? Where's the guys surfing? Where's the managers calling their employees asking what time they'll be in day of landfall?" Perhaps the new movie shouldn't have left out the long-storied tradition of clearing out liquor aisles in preparation for "hurricane parties" — which local officials warn against.

Another Twitter user responded to Carly's tweet to make a good point: the film might be thought a little bit insensitive given the recent Category 5 hurricanes that have wreaked havoc on many lives: 2018's Hurricane Michael and 2017's devastating Hurricane Maria in Puerto Rico. Despite an unlikely alligator invasion, the flooding and damage depicted in Crawl might feel too real to some, unfortunately.

While hurricanes come frequently along the Gulf Coast, they're often not laughing matters. They're also not occasions for alligator attacks like you'll see in Crawl. But for the sake of the disaster-horror film, anything goes.

More like this
Gerard Butler Insisted On Adding This Pivotal Scene To 'Plane'
By Catharina Cheung
Jemima Khan Used Her Own Life As Inspo For 'What’s Love Got To Do With It?'
By Darshita Goyal
What Is Mary J. Blige’s Net Worth? The 9-Time Grammy Winner Is Doing “Just Fine”
By Hugh McIntyre
Taylor Lautner Copped To Finding Jacob "A Little Annoying" In Twilight
By Stephanie Topacio Long
Get Even More From Bustle — Sign Up For The Newsletter
From hair trends to relationship advice, our daily newsletter has everything you need to sound like a person who’s on TikTok, even if you aren’t.