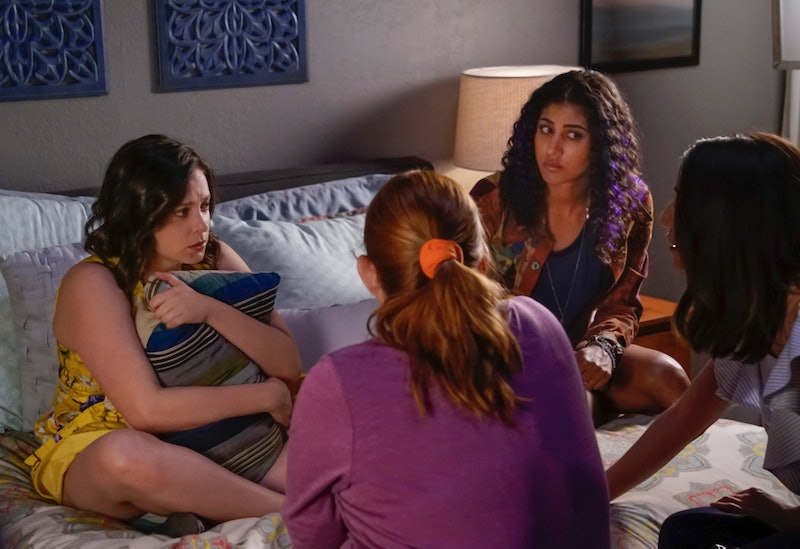 Spoilers ahead for Season 3 Episode 6 of Crazy Ex-Girlfriend.

I have a confession to make: Just like Rebecca Bunch on Crazy Ex-Girlfriend, I have been desperately and not-so-patiently waiting to find out what her mental health diagnosis is. I thought that with that game-changing knowledge would come an immediate shift for her character, a sign that things would start to get better for her instantly... if only we could just find the right label to give her so she could begin the right treatment. It would be the magical fix for her spiral to rock bottom that culminated in her suicide attempt in the heart wrenching final scene of last week's episode. Because that's how it works in movies and on TV... right?

Wrong. As Rebecca learned recently, "life is a series of gradual revelations that occur over a period of time" and it "doesn't make narrative sense" (thanks, Josh Grobaaaaan!). Despite being a TV show, Crazy Ex-Girlfriend is determined to accurately depict mental illness, even if it creates a messier narrative. In tonight's incredibly moving follow-up chapter, "Josh Is Irrelevant," both Rebecca and I finally faced some hard, honest facts. Even though the hour was centered on Rebecca finally receiving her diagnosis — a narrative beat that has been built up and teased for three years on The CW's groundbreaking musical drama — the situation is a lot more nuanced than that.

When someone is living with a mental illness, it doesn't just magically go away once you find the right "label" for it. Living with a mental illness is just that: learning how to actually live with it and manage it as best as you can. It was extremely impressive how the episode touched on all the ways people tend to cope with mental health issues, both suffering from them or watching someone in your life suffer from them. First, obviously, was Rebecca's desperate need to find the right label for her mental health issues after receiving so many wrong diagnoses over the years that just didn't fit her. After her suicide attempt on her flight back to L.A., she ended up in the hospital surrounded by her friends (who of course forgave her for all the horrible things she said before she left town), and her new doctor diagnosed her with — drumroll please! — Borderline Personality Disorder.

After her brilliantly optimistic anthem about finally getting the right diagnosis that would fix everything because she would finally fit in somewhere with others suffering from the same disease, Rebecca did exactly what her doctor told her not to do: she googled BPD. And she instantly hated everything she saw online.

Her earlier hunger for a diagnosis became a desperate need to get a different, "better" one from a second source. It took Dr. Akopian to finally get Rebecca to see the truth: she does indeed have BPD, she can't trade it for something else, and she needs to listen to her doctor's advice and recommendations. Rebecca didn't like the stigma attached to having a personality disorder instead of something like depression or anxiety that she could be prescribed meds for. She didn't want to have to work at managing it for the rest of her life, because it actually required work. But that's the reality of living with mental illness: you can't pick and choose how your mind and body experience it, but you can't decide how you react to it.

By the end of the hour, Rebecca was newly motivated to follow her treatment plan and accepted her diagnosis, along with the knowledge that having that diagnosis wouldn't fix things for her; she had to work on fixing her life herself. She had hope and clarity of mind for the first time since, well, essentially since we first met her in the series premiere. Back then, she decided to drop everything to move to California to be with Josh, because she believed that she would be truly happy then for the first time in her life. And she finally learned in tonight's episode that, along with her diagnosis and coming to understand herself a little better, it was never really about Josh in the first place. And as Hector oh-so wisely puts it, "Being suicidal has nothing to do with any one life event or person; it comes from a lifelong struggle with mental illness."

Ding ding ding! Rebecca's obsession with Josh and recent rejection and abandonment by him was never actually about Josh, though that didn't stop Josh from thinking it was (because of course). The whole episode, Josh tried to visit Rebecca in the hospital to try and apologize for making her want to kill herself (yeah, seriously). He even tried to bring her a puppy when she got home (and remember, this would be the first time he tried to initiate a face-to-face conversation with her since leaving her at the altar with no explanation).

This perfectly encapsulated the irrational egotism people can feel when someone they know and are close to tries to (or succeeds in) taking their own life. Blaming yourself for someone's suicide attempt is never the right thing, because mental illness and suicidal thoughts or actions are always about so much more than just one person. Josh finally realized this when he overheard Rebecca telling all her friends that she hadn't even thought about him in days. It's time for Josh to face the music and focus on his own issues ... but that's for another episode.

Another way that tonight's hour truly shined was in showing how all of Rebecca's friends reacted to her suicide attempt in authentic, yet incredibly different, ways. Valencia kept recording live video "updates" about Rebecca's recovery for her online "fans," but only posted the highlights when she was actually having a really shitty (yes, literally shitty) time. Raise your hand if you actually give an accurate representation of your life on social media, including your lowest moments (no one's hand should be raised).

Paula, meanwhile, coddled Rebecca and went along with every idea she had because she didn't know how else to help her friend. She's always been an enabler to Rebecca's wacky plans with her own, specific brand of mothering, but encouraging Rebecca to dismiss her doctor's diagnosis just because she didn't like how it sounded was not good motherly or friendly advice. Hopefully Dr. Akopian does get around to talking with Paula more, because there's definitely something deeper going on there.

Nathaniel (Scott Michael Foster) showcased how difficult it can be to reach out to someone going through a hard time because you don't know the right words to say. Watching him struggle to write a simple note to send with a bouquet of "Get Well Soon" flowers was all too real — I've lost count of how many times I tried to put pen to paper (or fingers to a keyboard) to send a message of condolences to family and friends, and my mind immediately went blank.

But it turns out there are no right words to say in that kind of situation; just the fact that you show someone you're thinking of them during a hard time is enough and what matters. And the side plot of his family revealing the truth about Nathaniel's mother's own suicide attempt when he was 10 was beautifully handled. It was a brilliant way to show the stigma that mental health issues and suicide still carry, especially in the upper class.

It's hardly a surprise that Crazy Ex-Girlfriend handled yet another story about mental illness with responsibility and authenticity (I don't use the word groundbreaking lightly), but the series continues to top itself with each new chapter in Rebecca's life. This episode serves as a refreshing eye-opener about the reality of living with mental illness, without ever getting stereotypical or cliche. There's no doubt in my mind that Rebecca's journey into treatment will be handled in an equally honest way, and I'm as cautiously optimistic as Rebecca is about the new path she's on.